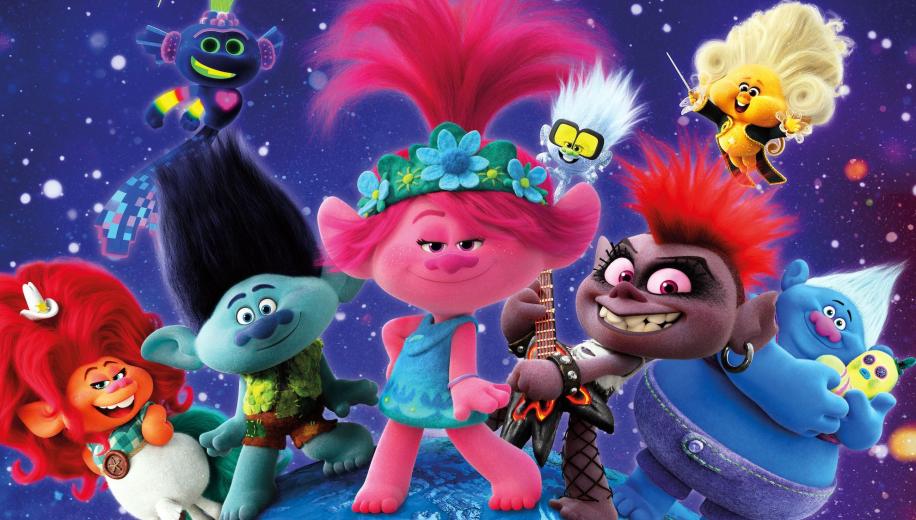 This week's Early Access Premium Rental is the first major release to go straight to streaming in lieu of the cinema, no doubt seeking to make back its $90M budget by appealing to a captive family audience.

Trolls was a perfectly enjoyable Dreamwork film adaptation of the toy line, taking an engaged all-singing cast and whipping up a psychedelic kaleidoscope colour storm (with glitter - don't forget the glitter) as the heroic and ever-happy trolls band together to survive an attack from miserable beasts who only get pleasure from eating them, and the cast get to sing their hearts out on a bunch of original songs that leads Anna Kendrick and Justin Timberlake put together.

Of course, its success led to an inevitable and completely unsurprising fully-fledged franchise - two TV shows (with recast voice cast), a TV Holiday special (with most of the movie's voice cast), and now a sequel, which was obviously hoping to do good business over the Easter break, and which might end up doing precisely that as a result of the very disaster that saw its theatrical release converted to a day-and-date (well, give or take - it arrives in the US at the end of the week) streaming rental.

It largely works, for what it is: basically a lightweight, kid-friendly and arguably kid-driven animated fantasy spin on Pitch Perfect

Queen Barb and her Rock Trolls want to destroy all of the musically different Trolls Kingdoms, heading straight for a confrontation with the Pop Troll World's Queen Poppy (who only just found out there were any other Kingdoms). As Poppy tries to avoid war, she travels the land learning about the other musical cultures, and hunted by Barb's colourful band of offshoot music assassins.

Trolls World Tour gets a lot of mileage repurposing old ideas - its Empire-style galactic takeover combo'd up with what feels basically like a repurposed Pitch Perfect sequel story (complete with the same cast lead and sometime professional singer Anna Kendrick), requiring medleys and song-offs aplenty across a broad range of musical styles. And it largely works, for what it is: basically a lightweight, kid-friendly and arguably kid-driven animated fantasy spin on Pitch Perfect.

The trouble with old movie ideas, though, is that they're only clever to adults if there's a knowing joke or three in there (Teen Titans Go! does this fantastically), otherwise it just feels like a whole blend of bland similarity; a very thinly veiled excuse to string together a bunch of gags, actions sequences and song numbers. It works to keep kids entertained - for sure - it's bright, colourful and insanely saccharine, like a giant advert for popping candy, but it can't escape the feeling that not only are the best scenes in the trailer, but those are the only scenes they wrote, with the rest improvised to string those moments together across a 90 minute runtime.

Of course, there are far worse things to have to endure when entertaining the kids over this lockdown period, and there are enough laughs to keep you mildly diverted - Kendrick really is a good singer - and the colourful array of song styles here is sure to offer something for everybody, with innovation aplenty, particularly in moments like when they re-tell the Trolls history in rap (although Moana did ideas like this better). The journey might be distinctly unremarkable, but moments are fun enough, and the burgeoning cast of supporting singers and familiar actors will keep you playing guess-the-voice: Mary J Blige, George Clinton and Anderson Paak being the standouts, although Kelly Clarkson and Sam Rockwell enjoy a little Country, Hamilton's Anthony Ramos leads the Techno party, Jamie Dornan seduces with smooth Jazz, and Rachel Bloom and Ozzie Osbourne embrace being the angry Rock villains of the piece.

Certainly one of the best looking of all the premium rentals so far - Rakuten and Amazon offer it in 4K, the Sky box does too, whilst Apple gives you 4K with Dolby Vision too - Trolls World Tour looks absolutely stunning, with a veritable cornucopia of eye-popping colours to wow. The song numbers are fun too, although not always as impressive as the almost all-original soundtrack in the first film (this sequel has been tagged a 'jukebox musical' because of its reworkings of popular tracks, further drawing in those Pitch Perfect comparisons), and the gags will occasionally elicit an irrepressible chuckle.

It's easy to see why Universal / Dreamworks are happy to take a risk dumping this on unsuspecting families who are locked at home - the kids will fight their parents to get the remote, and the parents will relish the distraction, but whilst this may be the first big cinema title to go straight to streaming (remember, most of the other rentals had already had a theatrical run, however short), and whilst it may prove an outright success, thus justifying the premium rental model, it would have been nice if it was actually a better film.
﻿