Is it a sub/sat system? Is it a PC audio device? All Ed Selley knows it that the latest speaker from Triangle is very good indeed. 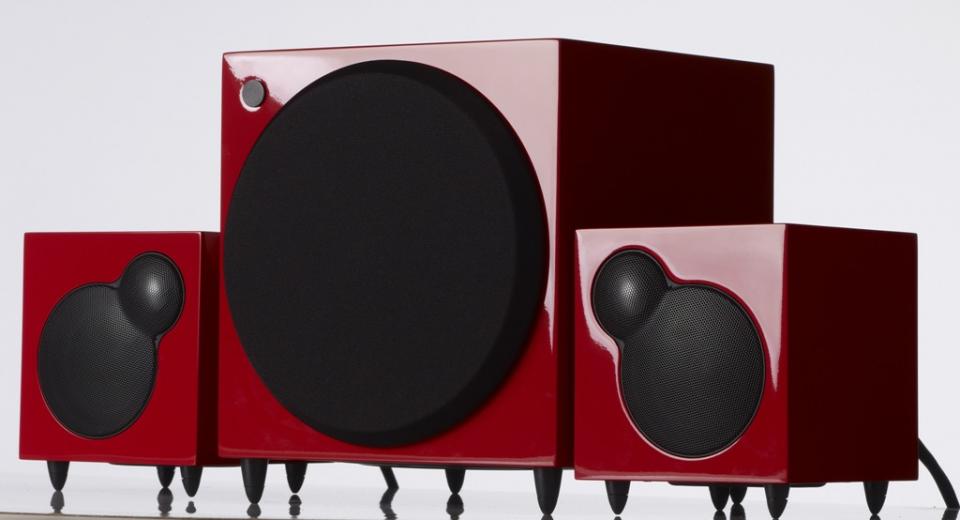 Triangle is one of France’s largest speaker manufacturers and produces an extensive model line-up that covers most price points. Like many French brands, there are quirky elements to the Triangle design process that has led to some very distinctive speakers over the years but even with this innovative history there is little in the company archive that provides an origin point for their latest product release.

The Color range is the entry level offering from Triangle and up until now has comprised three conventional speakers- a standmount, floorstander and centre speaker that as the name of the range suggests, is available in a variety in coloured finishes. This is now joined by the 123 system which is every bit as unconventional as the other models are normal. The 123 is essentially an active 2.1 sub system but this rather underplays the unusual design.

The Color 123 is a 2.1 active speaker system that can be connected to any source at line level or you can set the volume to maximum and connect a preamp to control volume at an external level. This is slightly unusual - many systems are completely self contained with various inputs while other active speakers lack the volume control on board and will require a preamp to function.

Instead, the Color 123 is something of a halfway house. You can connect either a single source to it (technically two as there is both an RCA and a 3.5mm input on the rear panel) as a self contained system or you can use it as the active tail of a larger and more complex system. This is good and bad. You might legitimately see the Triangle as a perfect bolt on to a PC or Mac but unless you have a fairly sophisticated soundcard, you won’t really see the benefit of what the Triangle can do. Something like the Epiphany Acoustics E-DAC reviewed recently would be an ideal interface however. The good news is that Triangle has had the presence of mind to supply a remote control so if you do want to use the volume function of the unit, you don’t have to be on top of it to do so. In fact there isn’t any point being that close as there are no physical controls on the unit - so don’t lose the remote! More of an irritant is that there is no volume indicator on the unit which means (as was the case with the review sample), if the volume has been set high from the previous session, you won’t know until it makes you jump out of your skin.

The Triangle comprises a pair of satellite speakers and a larger subwoofer. The subwoofer is the more visually conventional of the speakers. It makes use of an eight inch driver powered by an on board 100W amplifier. So far so normal but the sub also has a passive radiator built into the underside of the unit. This can set alarm bells ringing as of all the locations on a cabinet, the underside can be the hardest one to get a radiator working on but Triangle has considerable prior experience in this area and has produced a number of speakers over the years that feature such a radiator.

As well as the amplifier for the eight inch driver, the sub chassis also contains the amplifiers for the satellites. These are 50 watts apiece (all measurements for the Triangle amplifiers is given into four ohms but if the drivers present a four ohm impedance, they are legitimate enough). This means that the cabling between satellite and subwoofer needs to supply both signal and power to the satellite. To me, this seems like a better idea than having to power the units separately but it does mean that you will be required to make do with the supplied cable.

The good news is that with three metres of the stuff a side, you should not have to abandon anything but the most ambitious of setup plans as each satellite comes with a 3m umbilical attached to it. This terminates in a circular DIN type plug on the subwoofer. Plug the leads in, give it power and a source and away you go. The cable terminates in a fixed connection at each satellite and is the first of a few features that mark this little speaker as very unusual. The chassis is a 14cm cube finished in the same lacquer as the subwoofer. While many manufacturers would limit themselves to one driver in such an enclosure and most would stop at two, each cube contains a one inch titanium tweeter (a Triangle trademark), a three inch mid and then, like the subwoofer, has a passive radiator (in this case a four inch version) on the underside. No crossover is fitted to the sub but some tinkering suggests that the handover to the satellite is roughly 100Hz.

Like the subwoofer, this could be a recipe for disaster but Triangle has the design experience to pull it off. Each satellite has fixed feet that give it the required isolation and clearance to allow the radiator to work correctly. Each cabinet is sufficiently robust that despite having two surfaces pierced for drivers (and a third for the cable), it still feels very hefty. Triangle also supplies brackets to wall mount the satellites if you want - although the cable would be a difficult thing to chase if you decide to do so.

The fit and finish is excellent. The review sample came in white but red and black are also available and the paint finish of all of them is absolutely superb. The cabinets have been exceptionally well damped and everything feels very substantial. £600 is no small sum but everything is built to a standard that is worth the asking price. The only partial exception to this is the remote which is a slim “card” type remote that I have made losing an art form. The unit actually responds very well to the remote once you remember to point it at a satellite and not the subwoofer - especially worth remembering when the volume came set at maximum!

I spent most of the time with the Triangle using my Lenovo Thinkpad as a source and using a Cambridge Audio DacMagic Plus as a go-between. This allowed me to use the on board volume of Triangle and then max it and use the volume of the DacMagic Plus as the preamp. I used a variety of material including FLAC on Songbird, Spotify and various web sources for listening material. I then connected my iPhone via standard line out cable and then via Furutech ADL Cruise amplifier which again allowed me to use it as the preamp.

Most listening was done in my listening room with the sub placed centrally and the satellites on stands but with a nod to more “office” like spaces, it was also installed in my wife’s smaller studio which required the sub to be tucked to one side and the speakers placed at different levels. In both cases the partnering equipment was the same. The satellites are not listed as being specifically left and right which allows you to experiment with the tweeters “inboard” and “outboard” depending on which way round you attach them to the sub. I found that after a little experimentation, I preferred the sound with the tweeters inboard.

Whether the Triangle Color 123 is a perfect fit for you as a listener will depend on how you choose to use it and whether the design suits your requirements. There are other options for £600 that have greater flexibility - more inputs, no requirement for a subwoofer and a physical volume control to name but three - but there are few one box systems that have the same effortless musicality that this one does.

For anybody who does most of their listening from a computer and who can budget for a USB DAC (especially with a volume control), this is a sublime listen. The Triangle straddles the gap between desktop audio and full blown hi-fi. This may make it an awkward device to pigeonhole but when it sounds this convincing, I’m not going to complain too loudly!