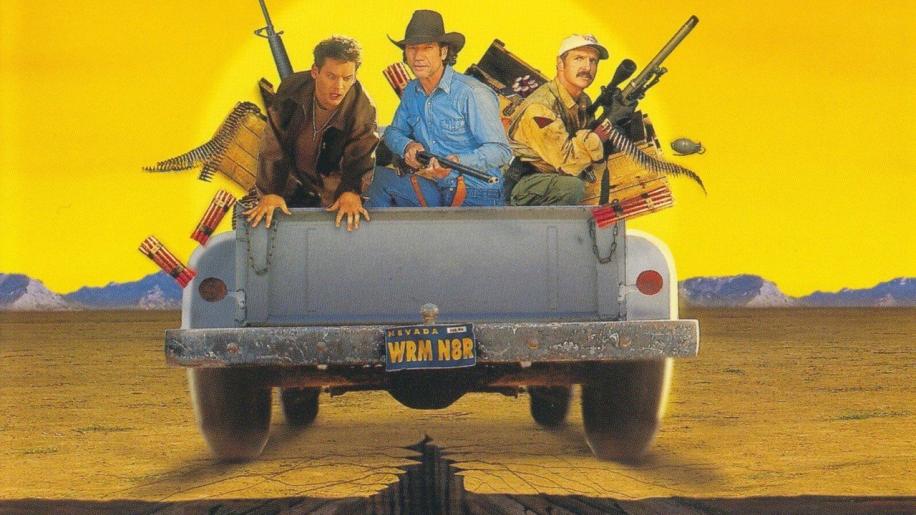 All of the Tremors movies are presented in 1.85:1 aspect ratio anamorphically enhanced widescreen transfers. The first movie has a transfer that, whilst probably being the best format we have or will ever have of the movie, still looks a little tired and slightly dated. The detail is pretty good, but there is some edge enhancement, occasional softness and noticeable grain. The colour scheme is quite bright, fresh and sun-blessed, with predominant browns and dirt tones and reasonably solid blacks. Tremors 2 is a more recent effort, but still looks quite dated, with average detail, some edge enhancement and a little softness, but thankfully negligible grain. The colour scheme includes a few more greens, but is not exactly broad, although blacks are quite decent.

Tremors 3 looks even worse than the second movie, even though it was more recent. The detail is reasonably good but there is still far too much softness and occasional grain. The colour scheme is slightly more like the first movie (because of the location) but still, it feels like that of a TV movie version of the original classic. The final movie also has that same TV-feel, but because of the Wild West setting, it does not look as bad. Still, we have some softness and significant grain, although the brown-dominated colour palette looks reasonably good. None of the transfers have any print defects to interfere with your viewing pleasure. All of the movies but Tremors 2 also have Dolby Digital 5.1 audio presentations. For the first movie, the track is still very frontally biased, with coherent dialogue, some nice surround effects and a reasonable rendition of the score. There is no real bass to speak of and, as I've stated, it mostly sounds like a glorified stereo mix but it is nonetheless probably the best we will ever hear from this movie. The second movie is oddly the only one without a six-speaker track, but you don't really notice a great deal of difference - dialogue is still clear, with score and effects all bunched up into the front channels but nevertheless reasonably boisterous. Tremors 3 gets a six-speaker mix despite not really deserving it, nor really utilising it to anywhere near it full potential. Dialogue seems reasonably clear and there are one or two louder effects (like Burt's massive 'gunfight' at the beginning) but generally this is quite a poor effort. The score is lame and very little gets out from the frontal array and into the rears. The final movie also has 5.1 track, which once again is a slightly poor excuse for the six-speaker tag. Dialogue is clear and predominantly from the frontal array, the Western score manages to breach into the rears for the most part and there are a few average effects but this is still nothing to write home about. The first movie really has the majority of the extras - and rightly so. We get a comprehensive Making-Of Featurette that is split into sections: How it all Began, Building Perfection, Mechanical Effects, The Cast, Photography and Editing, Creatures, Miniatures, Cliffs and the Ending. It also has a separate section entitled Creature Featurette that is devoted especially to the Creatures. There is a further 'Groundbreaking' Featurette, but this is a lacklustre four-minute job, that looks little more than an extended trailer. Much of the Behind the Scenes material dates from the time of the original production, but it is still quite nice to have so much background information into the movie, its cast and crew and how it came about.

The Outtakes run for a little over five minutes and are quite poor quality (given the age of the material) but nevertheless quite enjoyable. We also get several Theatrical Trailers for the main movie, along with Profiles of Kevin Bacon, Michael Gross and Reba McEntire (who played the female lead) - each lasting a few minutes and featuring on-set interviews with the relevant cast members - and a Photo Gallery of shots from the set. Finally we get the Trailer for the sequel, Tremors 2: Aftershock.

Aside from trailers, the second movie has no extras and the third only has a fifteen-minute Spotlight On Location Featurette that has interviews with all of the major cast and crew members and plenty of behind he scenes footage (along with lots of clips from the final film as well). If you liked the movie then you will be happy to watch this extra for all of the bonus material it offers.

The only other movie that has any significant extras in this collection is the fourth and most recent effort, Tremors 4. First up we have a Commentary (something which would have been nice for the first movie) by the director of this lacklustre sequel. He talks about working within his budgetary constraints, often playing up the movie beyond any sense of reality but still reasonably sensible about his comments (which are clearly aimed at those who actually enjoyed this sequel). He takes too many long pauses and offers insufficient interesting information for my liking, but it is still nice that the effort was made (even if for the wrong film).

For the fourth movie we also get a twelve-minute Making-Of Featurette which takes you on the set of this fourth Tremors movie. We get interviews with the main cast and crew members, including the director, talking about how interested everybody was in doing a period-set prequel and how easily it took off. Michael Gross does his best to sell this three-sequels-too-far project and his fellow cast members praise both him and the movie. For fans of this instalment, there is plenty of interesting behind the scenes material on offer here. Tremors is actually quite a good, fun cheesy b-movie comedy horror which easily keeps you entertained over its duration, but unfortunately all of the sequels are dire and it belittles the first movie to even have them in the same box set. The video and audio presentations are perfectly reasonable and there are a few nice extras to accompany the first and last movies, but there is still only really one film here that you're likely to re-watch. Big fans of Tremors (and those who do like its sequels) will be happy to see this pack hit the shelves and at least it is pretty good value if you do like the franchise.