A microcosm of excellence 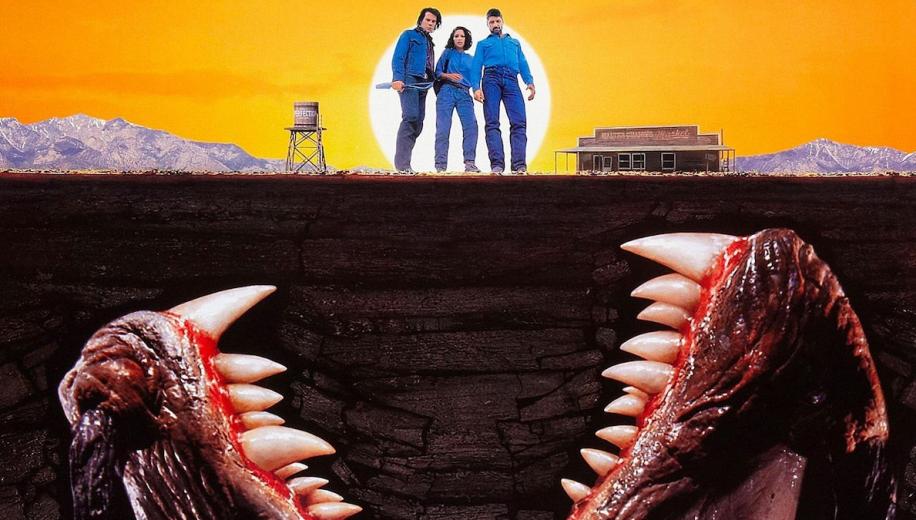 Here's some swiss cheese and some bullets

There is something wonderfully nostalgic about spinning a film like Tremors. This is made all the more remarkable as there was exactly the same feeling when the same was spun 30 years ago, upon its emergence on VHS. For Tremors, is, was and always will be a fondly remembered as the monster/horror/comedy which harks back to a by gone age, even when it was first released. Taking its cue from the 50’s monster movie which proliferated during ‘Drive-in’ cinema, and having a script shot through with wit, characterisation, scares and hilarity, Tremors simply continues to win fans with its damn likability.

Talking of which; our two main protagonists are Valentine McKee (Kevin Bacon) and Earl Bass (Fred Ward), two down and out handy-men, eking out a meagre existence in the town of Perfection, population 14, and whose friendly charming banter endear them to the audience. When new post-grad, Rhonda (Finn Carter) notices some strange readings on her seismographs, and then people start disappearing into the ground, it’s not long before the whole town is being besieged by huge subterranean beasts, termed Graboids, determined to feed on the remaining population. It’s up to the plucky townspeople to try and find a way out – but how can you escape when you cannot make a noise on the ground …?

The razor sharp script by S.S. Wilson and Brent Maddock, is deliciously directed by Ron Underwood, in his first feature, who trims all the fat leaving a lean, mean paced thriller of a ride, that balances perfectly the horror comedy line. The story is full of rounded characters, even those that are only in it for a few minutes, and including those that are only ever introduced dead, that behave and converse in a realistic manner – motivations are clear, nothing is done out of sorts and everything fits in the scope of the movie; they might be eccentric (the Gummers!) but they exist.

Even the monsters have a sense of realism; they are never explained, nor do they need to be, even though their anatomy could exist. The whole film is a microcosm of excellence, telling an outlandish story with perfect believability; it’s little wonder the film endures.

Let’s get this out of the way right off the bat. Grain. This new scan, while it has brought out new definition, colouring and black level, has retained a strong grain structure, particularly at low light levels, that is, at times, really quite dense, but never distracting or static; at least to me, since it is supposed to be there and adds to the filmic nature of the image; those of a more sensitive disposition might disagree….

Detail is terrific, the location shots of the terrain, mountains, desert, scrub, dust and dirt are all superbly captured, while staples such as skin texture and clothing weaves/tears are well maintained. The grim of the town, wood grain, peeling paint, sun blistered vistas are all clean and keen.

The WGC and HDR give a greater impact to the colouring; reds can really pop, see Rhonda’s shirt and truck, or the mouth of the Graboids, while the blues of the sky are lovely. Not a huge amount of green in the desert, but look how defiant the orange of the Graboids exploded flesh is against the rocks. Don’t expect bold, vivid colouring, that’s not what this palette is about; it is far more natural.

Black level is deep and strong, adding some good frame depth, while the white scale is even better, pushing the frame; check out clouds, or highlights such as sheen of the guns, without any sign of clipping.

Digitally there are no issues and the original source has cleaned up a treat, leaving only the grain to give a real organic nature to the piece.

There are three tracks to choose from, all restored: original theatrical DTS-HD MA 2.0 stereo, DTS-HD MA 4.0 surround, and remixed DTS-HD MA 5.1 surround, which is the one reviewed.

There is an immediate sense of separation with this track, very decent layering, with a wide stereo environment. Dialogue is predominantly front and centre, though the occasional directionality is noticed (Mindy on her pogo stick, for example) and well positioned in the track to never be lost, clear and precise. Effects are well catered for, with the surrounds giving a terrific sense of ambience, as well as creaks and crashes as the buildings collapse and, best of all, the all encompassing Graboids moving through the earth.

Bass is very tight and bold, not especially dominant, but there to add significant impact to gun shots (the ‘elephant gun’!), detonation of the home made explosives, the earth movements as the Graboids, systematically destroy the town and the awesome LF rumble as they move through the earth. The score is well handled and uses all the speakers giving a nice feeling of immersion. On the whole, an engaging and entertaining track.

The set has a very decent amount of extra features, all on the UHD, while the limited edition set has a whole bunch more.

Audio commentary – With Jonathan Melville, author of Seeking Perfection: The Unofficial Guide to Tremors, new for this release.

The Truth About Tremors - Newly filmed interview with co-producer Nancy Roberts on the film’s rocky road to the screen.

Digging in the Dirt: The visual effects of Tremors – Featurette interviewing the crews behind the film’s extensive visual effects, new for this release.

Music for Graboids – New featurette on the film’s music, with composers Ernest Troost and Robert Folk.

Pardon My French! – A newly assembled compilation of overdubs from the edited-for-television version.

The Making of Tremors – Archival making of feature.

Outtakes – With optional introduction and commentary by S.S. Wilson.

Difficult to believe Tremors was released 30 years ago. The film is ageless; taking its inspiration from the 50’s Drive-in horror genre and injecting the clever and witty script with humour and likeable, believable characters, the film is lean, mean, funny and above all entertaining; it is in many ways a perfect movie and continues to win fans today.

The set from Arrow is great; the native 4K image is detailed, bright, colourful with strong blacks, and maintains the integral grain structure, while the DTS-HD MA 5.1 surround track is well separated, dynamic with decent bass. When it comes to the extras package, the UHD has a whole host of newly recorded and archival material, and the limited editions set has even more.