How do we make a good Transformers movie? Dragons. Haven't you seen GoT? Everything is better with dragons. 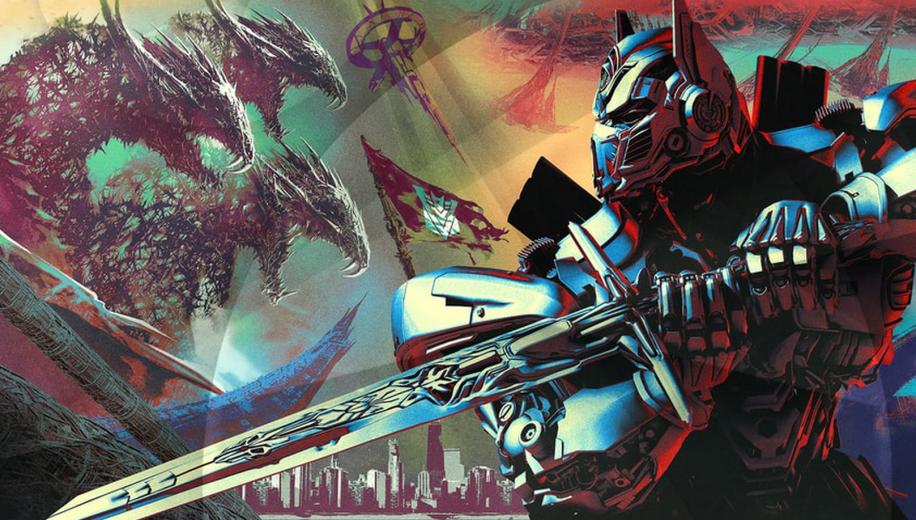 It's hard because every time a Transformers movie gets released, there's a small part in every fan of the original TV series and movie that hopes Bay's out-of-control franchise might have finally sorted itself out. The first one was enjoyable, and showed just how impressively Bay could bring these giant robots to life. It was largely fun, and, if given some direction, could have gone somewhere as a series. But Bay had other plans. One of those directors who is clearly surrounded by yes men, with too much money and power and sheer ego, he just kept finding new ways to redefine excess, making stupid movies which are painfully long and so mindless than they actually hurt your brain, with a random form of editing that appears to transcend logic (even in-movie logic) in favour of throwing everything in and cutting nothing out. Each movie could have been 90 minutes of fun if somebody had reined him in, but Bay is unstoppable, and The Last Knight is the latest in the long line of his excess excrement.
Stanley Tucci's drunk Merlin introduces us to the first Transformer, setting the stage for a movie about a magic staff which can save or destroy the world. 1600 years later, and Transformers are being hunted by humans. Wahlberg's freedom fighter teams up with Anthony Hopkins's narrator to find the staff before the Decepticons, leaving Optimus to make an anti-climactic final act entrance and be sort-of bad for 30 seconds. The Last Knight isn't quite as offensive as some of its predecessors, but it is just as insulting to our intelligence. It plays part straight action flick, part farcical comedy, but Bay doesn't do consistency. He's not going to be bound by anything or anyone. If he wants to have knights and robot dragons, a submarine or two smacking one another in the background (for LITERALLY no reason), and humans wielding swords against building-sized robots, he bloody well will. We can only dream what this kind of budget and visual imagination could do to a movie with an actual story. Paramount serves up the 4K Ultra HD Blu-ray release of Transformers: The Last Knight and it's hard to fault the visually stunning production, despite its material faults. Upscaled from a 2K Digital Intermediate, it still makes for an excellent 2160p presentation, framed in a variable aspect ratio which shifts from the broader 2.40:1 ratio to the more IMAX-friendly 1.90:1 ratio depending on which type of cameras were used. The disc uses 10-bit video depth, a Wider Colour Gamut (WCG) and High Dynamic Range (HDR), as well as Dolby Vision (the first Paramount release to include the format), and is encoded using the HEVC (H.265) codec.

Despite only a relatively nominal technical upgrade in terms of actual resolution (at least in comparison to native 4K presentations), there is still a nice uptick in detail, made more evident through excellent use of HDR and WCG, which brings more out of the shadows and manages to provide brighter peaks without burning out any of the finer details in the process. The Transformers themselves are as impressively intricate as they have always been, with The Last Knight - aside from one odd shot towards the end of the first act - seemingly offering the best integration of live action human and real-world objects and massive robots. It really is seamless; a perfected art form in and of itself, and this presentation offers up the best-looking of the Bayformers series in the best shape you could possibly imagine it in.

Colours are rich and vibrant, with the slew of eye-meltingly vivid neon sports-car tones juxtaposed with the lush greens and stone greys of classic English heritage, with explosions bursting to life, whilst more nuanced colour detailing allows little things like Prime's red nemesis streak (and eyes) to pop with intensity. Perhaps the only oddity comes with respect to the Extreme Tanning Makeover that many of the main actors appear to have been put through, leaving them looking unnaturally burnt, with odd pink lips that clash with the bronzed faces. Wahlberg suffers the worst, and it's perhaps a combo product of the tan and Bay's Extreme High Contrast Over-Saturation which makes it all the more comedic in some moments. Still, as a whole, the colours are stunning, rounded out by outstanding black levels. It's a fabulous looking image, capitalising on the already excellent Blu-ray.

Once we had got over the incredibly annoying changes in aspect ratio, the film moves between 1.90, 2.00 and 2.39:1 from shot to shot, we managed to sit down and compare the Dolby Vision version of the film with the HDR10 version. As with previous comparisons, the Dolby Vision version retains a superior image that is just better defined from scene to scene than the HDR10 version. There is a little bit more detail in the highlights, blacks remain inky dark but the shadows are more defined and overall the image has slightly greater impact. The subtle nuances of the specular highlights as sunlight reflects off the Transformers metallic bodies is more detailed, giving them an even greater sense of realism, whilst the incredibly detailed CG animation is often breathtaking in Dolby Vision. The colour palate is also better rendered with the tone mapping precisely delivering the colours and the resulting image is simply bursting with primaries, whether its in the numerous explosions or the paint work on the cars. However the slightly sunburnt look of the actors in the HDR10 version carries over to the Dolby Vision version and the cast look as though they've been hitting the tanning lotion a bit too hard. Overall there isn't a huge difference between the two and the HDR10 version still looks very good but the Dolby Vision version is definitely the superior viewing experience. 
Demo and reference through and through, it's on the audio-visual level that this series comes alive

Cas Harlow reviewed the audio using a standard 5.1-channel setup – Effects remain the most important element of the proceedings, as you might only expect, with the array bustling with a swathe of intricate noises, and not only during the high octane action sequences. From the minutely observed transformations to the LFE-tastic thrum of energy weapons, to the electric buzz of the smaller creatures (and the talisman that wraps itself around Cade) and the echoing rooms of vast mansions, there are some nice finer atmospherics on offer even before we get to the more intense moments. Likely what you came here for is the sheer bombast though, and there's simply nothing more roof-crashingly spectacular than the intensity of Cybertron's assault on our atmosphere, or the screeching races around the UK streets, with performance engines roaring furiously. The robot battles are expectedly explosive, delivering massive-scale firepower, as buildings topple and the environment collapses in the maelstrom. The Osprey crashes are punishing (although they pose little tangible threat, they sound fabulous) and the soundstage is used exceptionally well throughout the overlong proceedings. It's a stellar, flawless offering, and even the accompanying score provides a welcome injection of impetus - despite the fact that the plot takes a two-hour detour before anything actually happens, the soundtrack somehow still manages to at least help feign urgency. Demo and reference through and through, it's on the audio-visual level that substance-less products like the Bayformers series come alive.

Steve Withers reviewed the audio using a 7.2.4-channel Dolby Atmos setup – The previous Transformers film Age of Extinction was actually the first ever Dolby Atmos Blu-ray and an impressive debut it was. There have been hundreds since on both Blu-ray and Ultra HD Blu-ray and now The Last Knight joins the ranks with an Atmos soundtrack that, whilst it could never be called subtle, certainly takes full advantage of all that immersive audio has to offer. This is a soundtrack that has been dialled up to eleven, with the overhead channels being used from the very first scene as that distinctive Transformers sound accompanies the studio logos before plunging you headlong into a pitched battle in a Dark Ages England. There are soldiers and horses all over the battlefield, arrows flying through the air and trebuchets hurling flaming balls across the sky like napalm. It's immersive stuff and the subwoofer gets an equally thunderous workout as cavalry charge and flaming balls explode.

However despite the chaos, the soundtrack manages to remain balanced with superb localisation of effects within a 360 degree sound field and well integrated bass. Dialogue remains clear and focused on the screen, despite the cacophony of sounds that surrounds it and in the, admittedly rare, moments of quiet the sound mix even gets a chance to deliver some nice atmospherics. All this is before the Transformers themselves have even started fighting each other, which takes up the next two hours of the movie and involves as many audio effects as you can imagine. From gunfire and explosions to car chases and spaceships flying overhead, the soundtrack never lets up as it keeps pace with the furious action onscreen. It's as if the sound designer was trying to create a demo reel from a single movie, throwing in everything but the kitchen sink in the kind of overpowering and overwhelming mix you'd expect from a Michael Bay Transformers movie, thus making it the perfect accompaniment to the over-the-top visuals. Although there's nothing on the actual Ultra HD Blu-ray disc itself - a worrying and lazy trend for major studios these days - it's a little bit more justifiable given the sheer length of the main feature, which is enough to leave even the accompanying Blu-ray disc of the film bare bones and all of the extras relegated to a dedicated second Blu-ray disc.

Despite the lack of audio commentary or other additional material beyond Featurette-based extras (deleted scenes would be impossible for a guy who probably believes that he hasn't needed an editor since the first sequel) there's actually quite a lot of supplemental information to be gained from the near hour-and-a-half of behind the scenes Featurettes here, split into 6 sections which cover the (ill-advised) blending of mythologies, the UK shoot on protected locations, bringing the Autobot homeworld, Cybertron, to life, making the military aspect look more authentic, the key Autobot players and their respective vehicles, and the usual explosive madness you get on a Michael Bay movie.

Getting Justin Lin to Fast and Furious the franchise would work a treat, but it would likely have to be prised out of Bay's cold, dead hands

Transformers: The Last Knight is a tough watch but for those who simply have to see it, trust me, the first and last half hour will suffice and be more than enough (and would probably leave you bumping the score up by at least a point; maybe two). Sitting through the two hours in between will just hurt your head.

At least things are unsurprisingly outstanding on the audio-visual front, with superb video and near flawless audio, benefiting, respectively, from Dolby Vision and Dolby Atmos enhancement. Fans of the franchise will happily play apologist for another chapter or two, whilst those who only really rate the first movie as halfway decent, with the rest merely brain-numbingly long extended music videos, will find The Last Knight no better or worse than the rest. Not that it's likely to be the last anything, with not one but two more Transformers instalments (including that unnecessary Bumblebee spin-off) already planned. It's a shame because, even if Transformers was never going to be a meaningful franchise, it would have been nice if it was a little more fan-centric - getting Justin Lin to Fast and Furious it would work a treat, but it would likely have to be prised out of Bay's cold, dead hands.