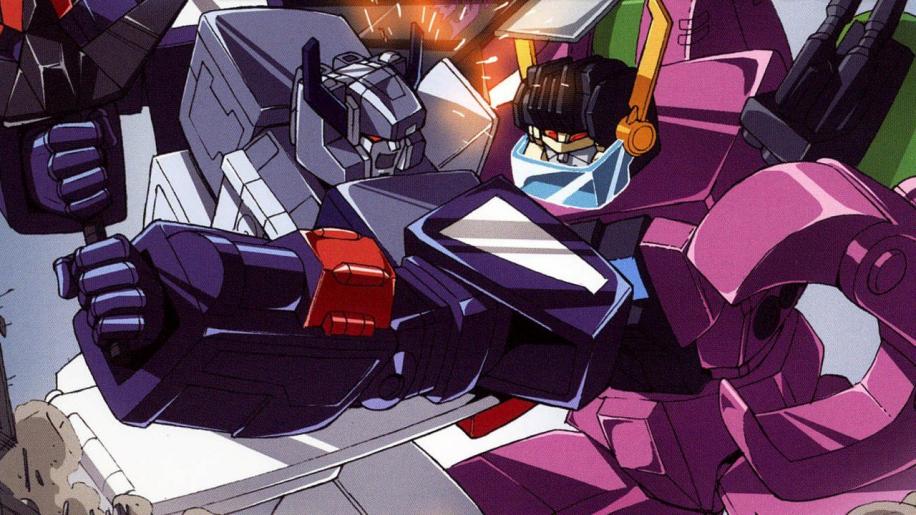 Transformers: Headmasters has been presented in a 1.33:1 aspect ratio non-anamorphic fullscreen transfer that unfortunately looks its age. Eighties cartoons never really looked that good but we have probably been spoiled by the endless re-releases of the original G1 US film and seasons - this looks distinctly shoddy. The characters lines are poorly defined, there is softness, grain running throughout and generally it has not aged well. The colour scheme is quite broad but occasionally slightly faded and the blacks are pretty poor. There are also many print defects in the form of scratches to the transfer. To be honest, those fond of the series will be happy to see it in any shape - bad or otherwise - but this is not the best Transformers presentation that I have come across. As I've already mentioned we get two alternative tracks here, the original Japanese Dolby Digital 2.0 and the abysmal US dub 2.0 track. Both have a terrible Japanese score with tacky violin music, an irritating theme (the only sound they retain from the original G1 seasons is the familiar bit when they change the focus from Autobot to Decepticon by flipping the shield) and long silences, both have silly voices but the US variation is clearly much worse in terms of coherence - the dialogue often makes little to no sense (translations are literal and often nonsensical, which at best provides unintended hilarity). Of course both tracks are limited to the frontal array, with effects (laser blasts and explosions) coming fast and furious but no sign of directionality or bass. You are probably best off watching it with the US dub and the subtitles on - that way the dub can entertain you with its often comic moments and the subtitles give you a vague sense of what is actually going on. First up, we get commentary on each episode in the opening trilogy of the series by Transformers fan Chris McFeeley. He explains the Transformers series continuity in precise detail (without which I would not have been able to understand it myself) but he really shows his true Transformers love when he is able to spot which Transformers are missing in certain groups. “There are the Predacons. Only three of them though, I don't know where the other two are.” It is pretty scary just how much he knows about Transformers - voice actors, Japanese character names etc. - but I guess we should be privileged that he is here divulging things that most people (whether or not they like Transformers) simply would not know about. He also talks about the Transformers toy line, detailing the different characters that were exclusive to Japan only. He explains the plot-holes and flaws in the continuity, heavily criticising the US dub (mainly during the second episode's commentary) and adopting a fairly realistic attitude towards the production in general, making the tracks a little easier to listen to. Unfortunately there are one or two long pauses, which can feel tedious when you do not know when they will end. However, any Transformers fan is likely to enjoy the sheer volume of interesting facts and trivia that these commentaries provides and only wish that he had done them for more episodes across the season.

Each DVD also contains the original scripts for the included episodes, accessible through your PC. Transformers is a very lucrative franchise founded on an extremely original toy concept. I remember enjoying it as a kid and will happily watch one or two of the original US adventures, or the superior movie, but this addition comes across as disappointing - not least because the sound formats leave you wondering what is actually going on. The propensity to dispatch known and loved characters seemingly without any thought shows no respect to fan loyalty and the actions of some of the fond favourites that remain are often ludicrous. This Headmasters series is presented in an expectedly poor transfer (considering its age and TV origins) with a couple of average soundtracks that are made much worse by the actual content. Fans will be pleased with the revealing commentary that adorns the opening three-parter and the availability of the original scripts but that still does not quite save the package. If you've seen Headmasters before and love it then this is a no-brainer because it is probably the only DVD release available but if you have not come across this Japanese addition to the Transformers legacy then you should probably watch a few episodes first to see if you like it.