One shall stand, one shall fall... 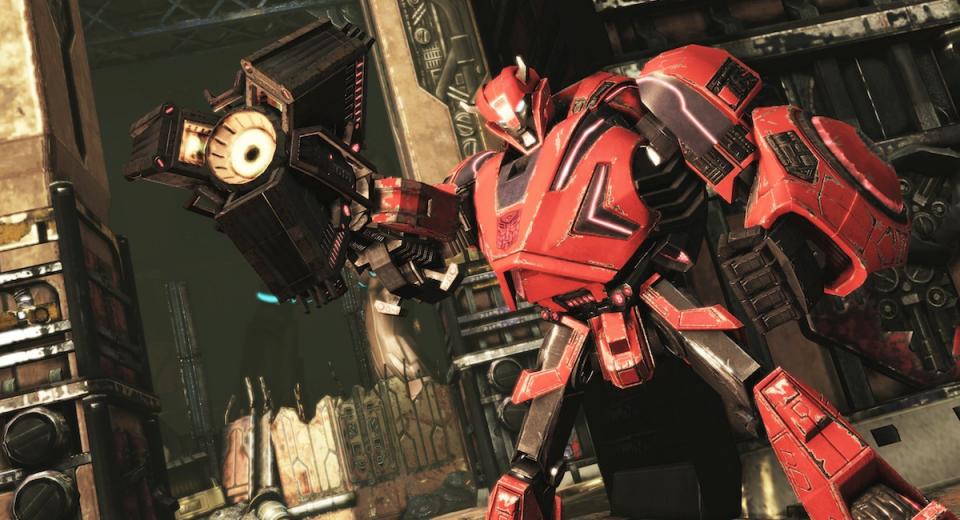 When 2010's War For Cybertron was released High Moon Studios proved it had the chops to deliver a game which smartly distanced itself from the imploding movie franchise and not only cater to the nostalgic fans of Generation 1 (G1) Transformers, but downright spoil them. Its downfall came in the form of repetitive gameplay and a generic backdrop. After a year off to present Activision with another sub standard release in "Dark Of The Moon", they return back to the G1 spin offs which increasingly feel like their labour of love, the fuel that helps them churn through the half hearted movie tie ins.

After the loss of both their leader (Zeta Prime) and their planet (Cybertron) the Autobots are fighting to protect "The Ark" the spaceship which will carry them from their dying home. With new leader Optimus Prime keeper of the "Matrix of Leadership" they must fend off Megatron and his evil "Deceptions" as they make their escape.

Rather than the split Aubobot/Decepticon campaign of WFC, this time a single campaign which jumps between both sides unravels the story, chapters focus on key characters who now have individual abilities which wisely add some flavour to the standard third person shooting setup. Playing as Optimus Prime you can call on the Autobot city turned Transformer Metroplex, Cliffjumper can cloak for short periods and Jazz has a grappling hook he uses to navigate the environment. Underneath the bells and whistles remain the solid Unreal Engine powered shooting mechanics, cover is still missing from the mix and being able switch to your weapon hand instantly helps but doesn't offer a true solution. There are still the standard weapons in the usual varieties as well as some interesting additions like a blade launcher you can bounce off walls or a shotgun which leaches life from your victims which can all be universally upgraded using the Teletran system which also allows you to endow you character with extra single use items such as shields and turrets while passive improvements grant increased health and damage.

The alternative robot forms are the most underused aspect with most transforming into different classes of automobile which are used mainly for transport between fire fights, extra weapons when all your guns are empty and a handy escape in low health situations. Jetfire and Vortex provide some welcome aerial missions but the only transformation anyone cares about here is Grimlock and his rage induced T-Rex form which doesn't disappoint. The action moves at an impressive clip as you learn the new mechanics and the story escalates until the nostalgia-fest of an ending which starts with fan favourite Grimlock's level and ends with a spectacular character hopping lead up to the first episodes of the cartoon. For those not enthralled with the source material there can be an element of robot fatigue, you fight as transforming robots with transforming guns on a transforming planet which has cities which transform into even bigger robots. At times it can all well, transform into visual white noise. The environments whilst impressive realisations of the source material are all metallic constructions of a similar design. A design the Unreal engine is very adept at implementing, the character designs are forever moving and shifting competently selling the living machine premise.

When dust settles from the campaign the war continues with the online modes. Escalation returns with another dose of wave based survival action, up to 4 players can work together defeating waves of enemies to earn credits which can be used to purchase new weapons and unlock new areas on the map. Cooperation is encouraged as the class based abilities such as healing and ammo regeneration require players to stay close for the best odds of survival. It continues to be one of the better implementations of a wave based coop mode. Competitive multiplayer allows you to construct your own Transformer giving you a host of different options and body parts to edit, easily fulfilling every child of the 80's dream of constructing their very own Transformer taking him into battle and levelling up thier weapons and abilities. The modes are fairly standard with death match and CTF flavours which all play well, the transformation element with the class based options give it enough of an identity to become a unique entry in a sea of multiplayer modes, the challenge will be if it can make the transition from just another distraction to a true long term multiplayer community in a highly competitive genre.

Transformers: Fall Of Cybertron is a well executed sequel, continuing the theme paying homage to the G1 era of the franchise they have rounded out the mechanical aspects with some much need variety and depth. The overlooked multiplayer aspects still deserve more attention than they will likely get and will provide a satisfying multiplayer experience for those that participate, for fans of Transformers this is a required purchase for the less obssesed there is now a game here worthy of your attention.