As the latest Transformers Blu-ray release proves, Michael Bay made the dinosaurs extinct 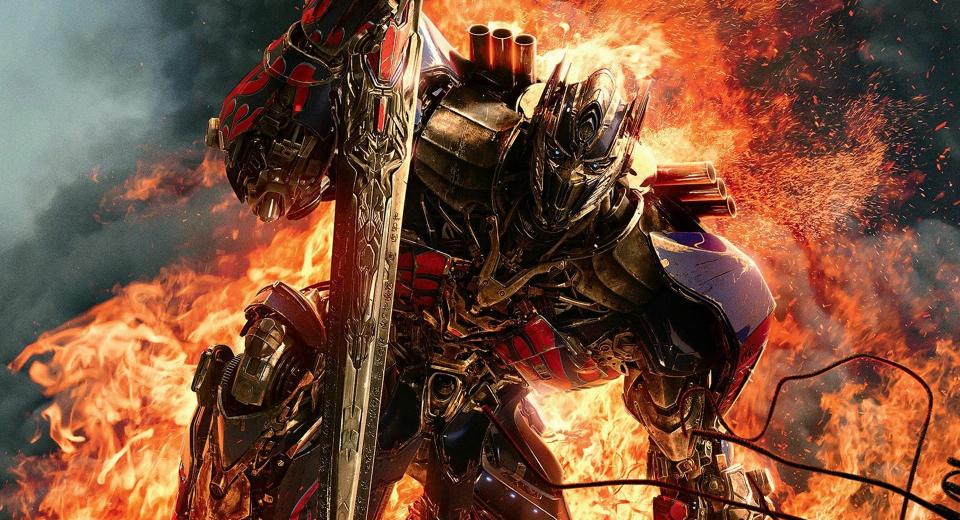 What's it all about?

Messy character design, terrible dialogue, disastrous plotting – even the sheer spectacle cannot compete with such integral flaws. And it’s all only made worse by the near-interminable 3 hour runtime.

The ‘plot’ – involving conniving CIA black ops teams assassinating the last remaining Autobots with the help of an alien bounty hunter – is refreshingly bleak, but simply takes far too long to unravel. Along the way we have an unnecessarily long introduction to some largely unnecessary human characters. Mark Wahlberg, Stanley Tucci, Kelsey Grammar – they’re all wasted. John Goodman at least looks like he’s having a literal blast playing the gun-crazy Hound, making the action more enjoyable than it had any right to be, but still not coming anywhere close to saving this bloated beast. And unfortunately Bay’s interest in female characterisation appears to merely be getting worryingly younger with every instalment. Things blow up. Space ships loom over cities. More things blow up. And soon your eyes get tired and your mind drifts, and you wonder whether you've been circling a black hole for the last few hours, and somehow lost several days of your life.
Bay has become the ultimate purveyor of big budget trash. It’s shiny, with lots of slo-mo, fast-editing and stupid Bay-ism. There’s lots of shouting and driving around in fast cars. Lots of crashes, explosions and signature Bay-hem. But it has no heart, no soul, and no longer even tries to make the slightest bit of sense. Even within the wacky world within which it exists, it makes no sense. Which is a hell of an achievement in a film about alien robots that transform into vehicles. It’s all so painfully worthless. Unfortunately, no matter how many bad things you hear about this movie, there’s a masochistic curiosity that’ll draw you towards checking it out. You’ll wonder whether it can really be that bad. Well, let me tell you, nothing can really prepare you for having to actually endure this film. Find out for yourself by all means, but don't expect to get those three hours of your life back. It’s no real surprise to find that Transformers: Age of Extinction boasts one of the best looking video presentations currently on the market; it just adds to the irony of having to tolerate such mediocre content in favour of reference perfection. Hitting UK Region Free Blu-ray, the 2D release of the movie comes complete with a 1080p/AVC-encoded High Definition video presentation in the original theatrical aspect ratio of 2.40:1 widescreen.


The demo disc that’s most likely to be blasting across shop TV screens during the festive period, Age of Extinction looks absolutely stunning.

Detail is excellent throughout – both in the digitally-shot footage and the original film work, with only the light natural grain allowing some distinction between the two well-blended realms – and we are treated to some magnificent fine object realisation: skin textures are intricately observed; clothing weaves are palpably authentic; and background flourishes pop with some superb touches.

The robots themselves are brought to life in all their million-piece glory, with astonishing clarity despite the still-frenetic camerawork. The colour scheme is privy to some vibrant, vivid tones – the Autobots boasting more than their fair share of primaries whilst their enemies are far more stainless steel than you’d have hoped for. Black levels are deep and retain the utmost shadow detail during the darker sequences. With almost no defects or digital issues – a hint of aliasing but no overt signs of banding or blocking – this is easily one of the best video presentations of the year.

Transformers: Age of Extinction is the first Blu-ray release to boast a Dolby Atmos soundtrack, which is excellent news for those few of us who have speakers in their ceiling, but for everybody else, merely just an intangible, future-proof bonus feature, like having a 3D disc but no 3D set-up. Still, there’s no real issue for the majority of us because, despite the lack of overt labelling, the Dolby Atmos feature automatically switches to a Dolby TrueHD 7.1 lossless track by default. And the Dolby TrueHD 7.1 track is every bit as good as the video. Dialogue – possibly the least important part, although Bay would probably argue otherwise given the amount of time he spends dishing out the inanity – comes at you clearly and coherently, emanating from across the frontal array for the most part, and retaining coherence in spite of the bombast that dominates the proceedings.


Bay's films, whatever gripes you may have with their content, consistently provide outstanding audio and this latest is no exception.

Effects really are the name of the game; from the signature transforming sound to the clank and whirr of robotic limbs; from the human weaponry that pounds the soundscape to the alien tech that blows your living room apart. Cities are decimated; rubble threatens to flatten you right where you sit; explosions ring out all around you. Atmospherics are astounding, dynamic potency is off the chart, and, for once, the sheer excess of Bay’s beast delivers. That’s not to say that there isn’t some fine nuance around the edges – ambience is prevalent and the various environments simply come alive – but this is a sound and fury affair through and through. And with a typically oppressive score thrown into the mix, and some hefty LFE wielded throughout, there’s nothing to complain about when it comes to the audio side of things. Even without an Atmos-equipped dedicated sound room, this release will blow you away.

Additional Dolby Atmos audio review from Steve Withers:
If you have managed to convince your partner to let you install speakers on the ceiling, then you're in for a treat when it comes to the Dolby Atmos soundtrack. We reviewed Transformers: Age of Extinction using a Marantz SR7009 nine-channel receiver with Dolby Atmos and we set it up in a 5.1.4 configuration. That means we had the usual five channels and subwoofer, plus four overhead channels - two at the front and two at the rear. The results with Transformers: Age of Extinction were simply breathtaking as the film's sound designers deliver the most immersive surround experience to date. From the opening shot as spacecraft literally fly overhead to the cacophonous battle in Hong Kong at the end, the positioning of objects within the mix is incredible. The effects are easy to pinpoint, even in all the chaos, whilst pans around the room feel completely seamless. The level of bass energy is simply frightening at times but everything still feels balanced and dialogue is always clear. It's good to hear that even in the (few) quieter moments in the film, the Atmos encoding can still add value with an early scene in a cinema having a very realistic sense of location and atmosphere (pun intended). There are more Dolby Atmos encoded films coming but, in the meantime, Transformers: Age of Extinction shows the full potential of the new format.

With the main feature pushing past the three hour mark, and given such stellar video and audio presentation, it’s no surprise that the extras get their own disc. Indeed, whilst there’s no extra film footage – no surprise really given that Bay’s not known for having a cutting room floor – the Featurette-based supplementals are feature-length in themselves.

Evolution Within Extinction – which is an 8-part Making-of Package – provides a whopping two hours of background into the production, split into Generation 2 (introducing the new Transformers and characters, all set within the same universe as the others); Drive Like Hell (looks at the vehicles); Small Town, Big Movie (Texas production); Shadow Protocol Activated (Alien set, Chicago set, and working with Chevy); The Last Stand and The People’s Republic (delving into the HK-set elements); Rise of the Dinobots; and The Finishing Touch (which looks at the editing).

Accompanying this near-all-encompassing, comprehensive beast are an hour’s worth of further offerings – Just Another Giant Effin’ Movie (which is a bit like a gag reel); A Spark of Design (looking at the Hasbro toys); T.J. Miller: Farm Hippie (the actors and director hanging out); and a series of Trailers and Previews.

This soft reboot of the franchise offered the ‘director’ the chance to refine his mega-franchise. Having made three massively financially successful but almost largely negatively received blockbusters, he could have taken the risk and actually done something different with the millions that he had to play with. Made changes which wouldn’t have affected the box office but may have helped his credibility.


Would it hurt to invest in something more than just effects? Like characters? Because if you’re spending 3 hours with them, they have to be better than this.

Despite its flaws, the one thing that Transformers: Age of Extinction excels at, is being a demo disc. With stunning video and audio - it's the first title to boast the new Atmos sound design - it'll be the go-to demo title for quite some time. Still, we probably could have just used the trailer for that, and saved ourselves three hours of our lives.