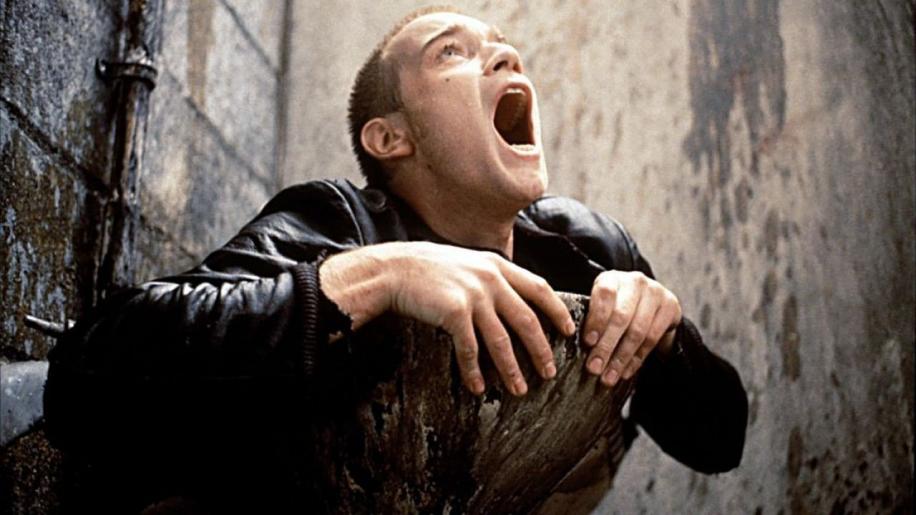 The movie was made for a mere £2m and corners would have to be cut, but the overall image and style of the movie is breath taking. From strong yellows and reds, to pale blues and dark blacks, the 1.85:1 Anamorphic transfer is very good indeed. There are signs of dirt here and there, but overall the image is strong with no colour bleed and plenty of fine detail on show. Boyle uses shadows and silhouettes throughout the movie, and these look striking with good shadow detail and strong, solid blacks. The transfer is first rate, and looks far sharper and more detailed than I remember it from the criterion Laserdisc edition, or the old R2 DVD, you won't see this film looking any better than in the presentation here. Universal does us proud again with a choice of both Dolby Digital and dts 5.1 sound. The mix for both tracks is strong with good dynamics and an enveloping feel. Split surrounds are used well during certain moments, with dialogue sounding clean and clear as well as good use of the LFE channel during the nightclub scenes. The soundtrack to the movie is very important in telling the tale, and each track sounds excellent using the whole soundfield. Overall there is not a lot to separate the dts and Dolby tracks, but the dts mix just pips it with a cleaner and more dynamic edge. This two disc set has plenty to offer fans of the movie with some well thought out extras. First is a commentary track from the cast and crew and which gives an interesting insight into the movie and its production. Also included on disc one is a behind the scenes featurette with interviews and some behind the scenes footage, which is generous in it's length and extremely detailed in its coverage of the making of the movie. And finally on the first disc, we are given a look at nine deleted scenes. While they don't add too much to the overall story, there are some very interesting moments; however the picture quality lets you know you are watching cutting room floor material. Moving onto disc two we have five main sections to look at. Retrospective covers the look of the film now and then, the sound of the film now and then, the thoughts of the cast and crew and a behind the needle feature. Each area is informative and lets us see through interviews the thoughts of the cast and crew when filming in 1995, and then gives us their thoughts in 2003. The behind the needle feature is director Boyle sitting next to a TV and talking us through some of the effects shots and shooting ideas. Trainspotting at Cannes is a collection of interviews recorded at the Cannes launch in 1996, and a montage of footage from the event. Finally there are two trailers, an art gallery and cast and crew bios. A very nice package of extras which are well presented, and well worth watching. The film is British cinema at it's best, stylised, funny and thought provoking. The picture and sound quality is first rate, with some excellent extras. This R1 edition is identical to the Definitive R2 disc.