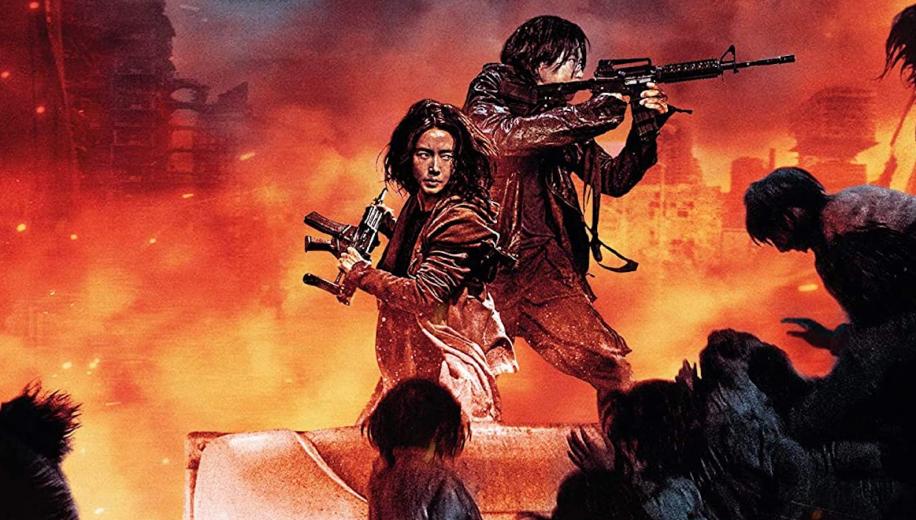 Train to Busan's sequel loses some of the emotion but doubles down on the intense ferocity, blending elements of Fast and Furious, The Raid and Mad Max to trashy but pretty entertaining effect.

Train to Busan was a tough ride, not least due to the 28 Days Later intensity of the zombies, but also because it sought to really play with your emotions. And whilst it sometimes fell down hard on melodramatic, when it hit home, it hit hard. Perhaps more importantly than its merits however - and it was a far from perfect feature, massively overhyped on release - was its indisputable success, which all-but guaranteed a sequel.

Peninsula has been equally hyped, particularly in terms of its scale, but expectations should be kept at bay as most of this 'scale' comes courtesy of videogame (good quality videogame mind you) style vehicular sequences, which only occasionally return to reality, and, even then, mostly in the last act. Nonetheless, The Raid-style action is impressively staged, and as a rollicking zombie actioner, it's pretty effective.

After a marine escapes the first wave of the outbreak only to lose everybody he loves, he and his equally distraught brother-in-law decide to accept a dangerous mission to return to the Peninsula to recover a cache of money, finding the operation complicated when a rogue militia intercept the payload, rescued only by a young family who somehow survived the apocalypse.

Peninsula is a propulsive beast, making its biggest emotional plays at the start and end, with the through-line 'revelation' about the guilt the marine is carrying around a convoluted afterthought, and mostly getting down to business with innovatively staged zombie (and corrupt militia) battles. The car chases are excessive, and unnecessarily videogamey, but do have some clever moments, and the shooting is on point, revelling in that post-The Raid, post-John Wick landscape of tactical shooting that endures you to Gang Don-won's protagonist a whole lot more than any soulful looks he attempts. More interesting is his Furiosa-style companion, K-pop legend Lee Jung-hyun, and her two young daughters, who are pretty handy with both remote controlled cars, and the real thing. Train to Busan director Yeon Sang-ho returns here, and you can feel the connective tissue between this and its forebear, even if Peninsula is a whole lot more interested in large scale mayhem, which - at a pure entertainment level - is pretty rewarding.

Train to Busan Presents: Peninsula comes to UK Blu-ray courtesy of Studiocanal. The disc presents a 1080p/AVC-encoded image in the film's original aspect ratio of widescreen 2.39:1.

The Blu-ray delivers some strong detail, and surprisingly good handling of the extremely dark material, with little evident crush for the duration (perhaps the propensity to inject it with effects sequences has had a payoff in this regard). Skin textures, zombie gore, and even that elaborately staged but ultimately The Last of Us-like backdrop get impressive rendering here, with fine nuances and detailing throughout. The colour scheme is that insipid yellow-inflicted style which infects plenty of lower budget productions, particularly those shot farther East, for some reason, but it looks plenty good even without HDR (yes, it's still a kick that we don't get the same 4K release that the US have), with a few popping tones and some strong and vibrant colours peppered throughout, and those aforementioned solid black levels which retain their integrity commendably. It's largely excellent.

Train to Busan Presents: Peninsula's Blu-ray release delivers an even more impressive soundtrack courtesy of its original language Korean Dolby Atmos mix, which really is a fabulously immersive track, helping engage you even more into the furious action sequences and no doubt informing your enjoyment of the whole.

Dialogue is given good prioritisation, whilst the overmelodramatic - although expectedly so - score sweeps in and frequently utterly smothers the whole array, similarly getting keen representation. It's the effects, however, that truly impress, bursting at you from every angle with immersive dynamics that literally plop you in the centre of a stage filled with rabid undead. Car chases take it up a notch (perhaps making up for the videogame graphics slightly as a result), whilst the gunplay is ballistic bliss, thundering across the soundstage with welcome LFE throughout. Superb.
﻿

Studiocanal don't exactly bring us an abundance of extras, and what is on offer is paper-thin, but at least they don't leave the disc utterly bare bones.

A fairly unsubstantial set of extras

A quartet of Featurettes give the impressive of wealth, but they're actually all just a couple of minutes in length, leaving this a fairly unsubstantial set of extras. Better than nothing, but barely.

Train to Busan Presents: Peninsula has been critically judged in comparison to its predecessor but the returning director's sequel is a fairly competent zombie actioner in its own right, and probably stands up quite well alongside a somewhat overrated first entry.

Fans of the first film should check it out

Lionsgate's UK Blu-ray release may be a disappointment in that it's yet another example of a title not a afforded a 4K package when the US have one, but it's a very nice disc nonetheless, with very good video and excellent Atmos audio, as well as the same smattering of extras you would have found on the 4K disc. Fans of the first film should check it out.