Wi-Fi for all, rejoice! 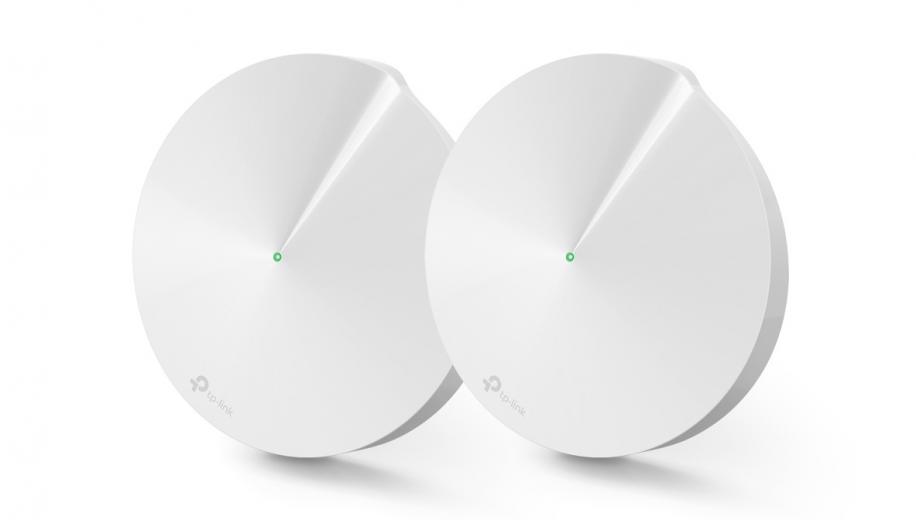 What is the TP-LINK Deco M9 Mesh Wi-Fi System?

The days are thankfully long gone when you had to suffer Wi-Fi blackspots in the home. Those cries from that corner bedroom that one of the unlucky family’s streaming service has failed yet again are no more. With the latest Mesh Wi-Fi systems available from all the big players such as Google, Linksys, BT, Netgear and TP-Link there are options to suit a wide range of budgets and home sizes.

Back in October 2018, we reviewed the Netgear Orbi RBK23 Mesh Wi-Fi system which came with three units and provided enough coverage for a large home. Winning our AVForums Recommended Award, it offered excellent performance with a decent specification. Our review item today is another Mesh Wi-Fi system, this time from TP-Link's Deco Range.

Their Deco M9 Plus Mesh Wi-Fi system, available for £280, comprises of two Tri-Band AC2200 units, each with dual Gigabit Ethernet ports creating a mesh network that covers up to 4500 square feet. Capable of connecting over 100 devices and acting as a Smart Hub thanks to Zigbee, Bluetooth and Wi-Fi interaction, it offers a good set of features, but is it worth the money? Read on to see how it fares during our tests…..

What about the Design and Connections?

The Deco M9 offers a very minimalist and attractive design. The two units would not look out of place if they had to be on display, with an all-white hard plastic, disc shaped design, featuring just a single LED light to the top. Measuring just 144m diameter by 64mm high, they can also be easily hidden if they don’t suit the room's aesthetics. Adding to the pleasing design, all the antennas, of which there are 8 per unit, are internal. The Netgear RBK23 units only contained 4 internal antennas which suggests why TP-Link claim coverage of 4500 square feet with just the two units.

Connections are minimal with just two Gigabit Ethernet ports per device. The power connection is the standard affair with a reset button on the underside of the unit. There is also a USB 2.0 port on each unit, but this has no functionality at all. It is stated as ‘reserved’, but most likely means it won’t ever be used for anything. A shame as the ability to connect a USB hard drive or printer, that we often see with Netgear’s devices, would have been most welcome. Unlike the Netgear system, there are no sync buttons in case the units lose connection. A simple power on and off is the only option here. The single LED light to the top of the unit will display a range of colours to indicate the unit’s status, such as Green/White for all OK, Blue for setting up, Yellow for restarting and Red if there is an issue with it. The LED light can be turned off completely via the App or set to night mode.

Is it easy to setup and feature rich?

TP-Link have opted for an App only setup with the Deco M9 and whilst the App is very simple to use with clear instructions on how to set up the system, a web-based interface would have been useful for easier access to all the system options.

Via the Deco App, available on both iOS and Android, the setup simply involves connecting the first unit to your Router/Modem and following the App instructions. Once this first unit is up and running you then power on the second unit and add it via the App. Our setup didn't quite go as simply as this as the main unit refused to work properly until we had reset it a couple of times. The second unit worked correctly the first time. Hopefully, this was just an anomaly and not the norm. The Deco App is very simple to use and has all the options easily accessible in just a few taps. The main overview screen has quick access to the Deco unit’s status, Anti-virus and Parental Control settings plus shows any network devices connected or currently offline. The next options are for Shortcut and Automation. As the Deco is compatible with Zigbee and works with Amazon Alexa and IFTTT you can use the Deco as your Smart Hub to control all kinds of devices and set up automatic schedules such as turning the lights on when you arrive home, lowering the thermostat when you leave for work to name just two of the almost unlimited options, depending on the compatible devices you have in your home.

The final option is for accessing all the devices settings. From the More tab, we can configure the Wi-Fi, blacklist devices and test the internet speed along with a simple Firmware update procedure. The TP-Link Homecare settings are also found here, allowing configuration of Antivirus, Parental Controls, QoS, setting up of other users and a monthly report on device activity, security issues and Smart activities. Within this page are also found the advanced settings which give you most of the options you would expect to see on a router’s web-based interface such as Port Forwarding, SIP ALG and Address Reservation along with the LED light control. It doesn’t have the most comprehensive of settings but should have enough to cover most bases.

The key feature with most Mesh Wi-Fi systems is a dedicated backhaul. Here with the Deco units, it not only has 1 x 5G (867Mbps) as a backhaul but also a 2nd 5G (867Mbps) and 2.4G (400Mbps). This allows bandwidth to be freed up with dedicated wireless links between the Deco units. This claims to offer speeds over 1000Mbps, which we will address in the next section.

A Wi-Fi device at £280 does seem expensive, but Mesh systems are not to be compared with basic Wi-Fi extenders. These can only communicate between themselves and the router, so even if you have several in the house, they all have to communicate back to the router, which results in often slow performance and poor range. Powerline Adapters can fill a gap too, but these are heavily dependant on your home's internal wiring. In a Mesh Wi-Fi network, all the devices talk to each other resulting in significantly increased coverage. Additional units from any of the Deco range can also be added to further increase the coverage starting from just £70 for an M5.

The testing was carried out in a standard 4 bed detached house. As we have BT Infinity HomeHub which has an integrated modem, during the App setup the Deco system automatically configured the IP address to avoid conflicts. We tested using a PC connected via Gigabit Ethernet to our existing BT HomeHub Modem/Router and with an 802.11ac capable laptop. We then repeated the tests using the Deco system. During our testing, we turned off all other wireless transmitters to avoid any interference.

We use a program called LANSpeedTest (ver 4.4) by Totusoft which is a simple but powerful tool for measuring Local Area Network (LAN) speeds. It does this by building a file in memory, which it then transfers both ways (without the effects of Windows file caching) while keeping track of the elapsed time, and then does the calculations for you. This gives us the results of transferring files between our PC and the laptop.

We then tested wirelessly with both our BT Home Hub wireless network and the Deco Mesh network.


The results above show that when connected to the Deco units via Ethernet the speeds received are very good with a maximum of 476.24 Mbps, although over 13% less than the Netgear RBK23 which saw 550.35Mbps. Where the issues appeared was with the wireless tests. Despite two units being used, compared to our single HomeHub router, none of the tests saw any improvement with the Deco units, in fact they were significantly worse with a high of 173.96 Mbps in one test compared to a high with the BT HomeHub of 224.14 Mbps. In all the locations we tested we still had faster speeds than our internet connection could supply anyway, but for those with faster connections and multiple stream requirements, it could become an issue. During use we also suffered odd disconnections and frequently saw the Deco units LED light on red or yellow. The units also seem to reboot without warning. It seemed to happen when picking them up or when plugging in an Ethernet cable. Not all the time, but enough to be an annoyance. The same with the App, it required occasional force closure to refresh the information. It’s also worth mentioning that the units do get very hot when powered on, so be careful if placing them on delicate surfaces.

Despite the claim of extra antennas and offering the same coverage as the Netgear set, we found that as far as wireless was concerned, our test location continues to offer a very tough test and perhaps a three-unit system would have worked better.

For £280 you get a Mesh Wi-Fi system comprising of two units and a whole host of features including Tri-Band Wi-Fi, dedicated 5G and 2.4G backhaul, simple and easy to use App and compatibility with Amazon Alexa, IFTTT and Zigbee for the ultimate Smart Hub experience. Also of note is TP-Link's ‘Homecare’, which features parental controls and an impressive antivirus.

Our test location is always extremely tough on Wi-Fi devices and despite the claimed range, only having two units was perhaps asking too much. The results during our tests were encouraging when connected to the Deco units via Ethernet, but below average when connected wirelessly. Together with intermittent performance, disconnections and reboots, we had much higher hopes for the Deco M9 Set.

The easy answer here, if you have a 4+ bedroom house, is the Netgear RBK23. It doesn’t have the Smart Home features and connectivity of the Deco M9 but it is available for a very similar price, includes three units to give much better coverage and during our tests provided a much faster wireless speed. At £280 the Deco M9 from TP-Link is definitely an option to consider if you have a smaller sized home, particularly with the Smart Home integration it offers, but for larger properties there are better solutions available.