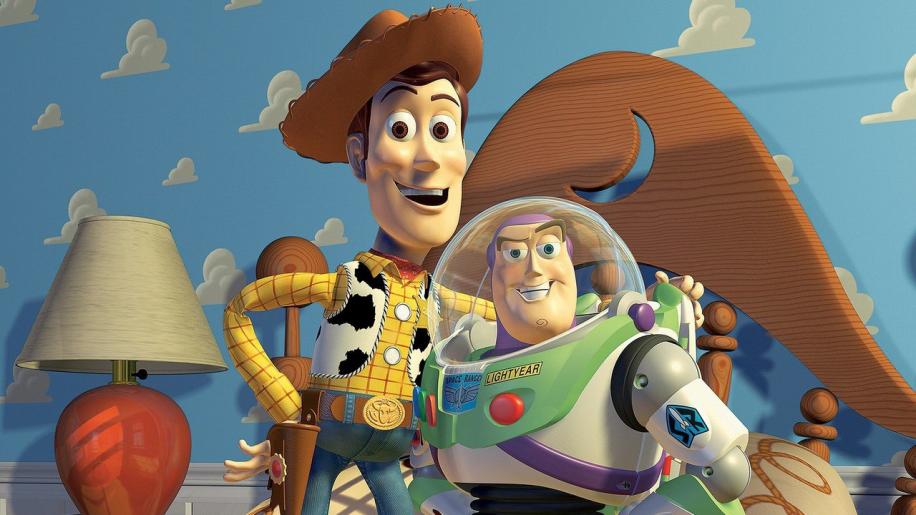 There is a saying that you cannot improve on perfection but that is exactly what Pixar have attempted with this release. Claiming this version to have the highest bitrate ever on a Disney/Pixar release, Toy Story 10th Anniversary Edition does indeed improve on previous releases albeit subtlety. I have done a side by side comparison with not only the previous region 1 release, but also the existing region 2 version. The bitrate (as seen in the graph in this review) for this newest release measures 8.93Mbps compared to the region 2's 8.26Mbps. This may not appear a significant increase to appreciate any improvements, but in comparison, this newest version exhibits greater levels of definition and sharpness. Smaller details are easier to observe and larger objects display more clarity where the other versions show more a smoothness.

Now as I said, these differences are subtle to say the least. All previous versions were so close to perfect anyway (the only limitation being in the animation itself) that improving on them was never going to yield dramatic results, but if you own a large plasma or even more so a projection system then the improvements are worth having. As before the colour palette is strikingly vivid with incredibly low bleeding visible. Blacks are exactly that, black and shadow detail is as you would expect, perfect. Grain doesn't exist in the digital domain so we won't even go there!

We all strive to have the best image we can in Home Cinema and this version of Toy Story is just that.... The best image you can get. At least until High Definition becomes readily available. The packaging claims this to be Disney/Pixars first ever release containing a DTS soundtrack. Now, we in the UK have had the benefit of DTS on a few Pixar releases but this comment refers to the USA region 1 market. Now this does seem strange to me as DTS originates from the States and first began appearing on DVD there as well, so for us to have Disney/Pixar movies with a DTS soundtrack (Finding Nemo springs to mind as one) and for Region 1 to have only just adopted DTS on theirs gives me a certain feeling of smug satisfaction!

Back to Toy story, the one thing this version does have which is fairly unique is both a Dolby Digital 5.1 EX and a DTS 5.1 ES soundtrack. This is a matrixed 'rear centre' channel but is not quite a true 6.1 soundtrack as found on, say, the movie Gladiator to name but one. So to take full advantage of this improved sound quality, you need both an amplifier with the extra channel of amplification plus of course another one or two rear speakers.

Lets first look at sound from the standpoint that you do indeed have this enhanced capability. The added channel does immerse you into the action considerably better than previous versions. That's no mean feat as the sound has always been excellent on Toy Story but with the added advantage of both THX certification and the additional matrix channel there is an enhanced level of both separation and depth to the sound. Bass is tighter especially on the DTS version than anytime previously and both the musical score and surround effects sound much more open and have added spaciousness. Voices are much as before which is no criticism. Clear and with fine tonality you never struggle to hear what's being said over the action.

As with most comparisons between Dolby Digital and DTS, the DTS does sound louder but it also has better dynamics. It sounds a bit like you've swapped your amplifier for a more powerful one as you swap between the two soundtracks. I prefer the DTS one, but this has in the past appeared to be a matter of choice. Some can only hear an increase in volume whilst others can pick out improvements in dynamics and separation. Once again, this 10th Anniversary Edition, contains the very best sound currently available on a Toy Story disc and another reason to buy this version of the movie. This is a two disc edition of Toy Story. This is mainly due to the high disc space needed for the improved Picture/sound quality on the movie itself and less due to a mass of added extras. Having said that, the extras on the second disc are fairly plentiful and offer real appeal to fans of the movie. On the first disc, besides the movie itself there is also a short Intro by Director Jon Lasseter who basically tells us what to look forward to on this new disc. Then there is 'The Legacy' which is about ten minutes of retrospective words by those connected with the film such as Tom Hanks and Tim Allen, but also with those who just love Toy Story like George Lucas and Brad Bird. Short but sweet!

There is an Audio Commentary featuring Director/Writer Jon Lasseter, Producers Ralph Guggenheim and Bonnie Arnold, Technical Director Bill Reeves and Writers Andrew Stanton, Peter Docter and Art Director, Ralf Eggleston. This is truly fascinating and a must listen to if you like the movie. Next up is a collection of 'Sneak Peeks' offering trailers of several other movies including a brand new one for 'CARS' the next Pixar production. There are also trailers for Toy Story 2 DVD, Cinderella DVD, Chicken Little, Tarzan DVD, Studio Ghibli DVDs ( Disney meets Japanese Anime type animation), Lady & the Tramp DVD and Old Yeller DVD which finishes off the extras on Disc 1.

Disc 2 contains most of the extras found on the previous Toy Story Ultimate Toy Box offering plus the inclusion of a few new nuggets. (Check out the hilarious Easter Egg on the main page by clicking on the gold star at the foot of the page) Starting off with a 20 minute documentary titled 'Making Toy Story' looks at the history of Toy Story and of computer animation in general. With contributions from Director Jon Lasseter who also looks at Pixars' earlier animated effort, 'Tin Toy' and other members of Toy Story's production team. The earlier drafts of characters Buzz and Woody, with Woody originally a ventriloquist dummy, is fascinating. All the other characters are looked at in detail and how the actors where selected to voice these characters. A great documentary.

'Filmmakers Reflect' has the main Production/Direction team chatting over coffee about how their creation 10 years ago came together. A light hearted retrospective and one of the new pieces on this disc. 'Deleted Scenes' are next and contain 10 mostly rough, hand drawn draft scenes. There are two scenes that did make it as far as the computer animation department, but the quality is still fairly raw. Still, reasonably interesting. Don't miss the small Sheriff's star icon at the bottom which contains an Easter Egg in the form of a short animation -Woody's Nightmare. 'Behind The Scenes' does exactly what it says on the toy box! It is split into 6 short featurettes covering Design, Story, Production, Sound & Music and Publicity. It is presented again much as a documentary with many members of the Toy Story team talking about the various aspects of making Toy Story. Good but we're staring to cover old ground a little. Finally we have a game! Titled 'The Claw', it is basically like that game you played at the Fairground where you direct the claw left or right and then drop it to see if it picks up a prize. Probably great fun for the kids, but after doing it once, I quickly lost interest especially as I never once got to keep the prize I won!

That's about it. Like I said, not massive amounts, but enough for most Toy Story fans. Once last point, every page has Easter Eggs but if you go to the 'Index' page, there you will find all of them listed for easier access. Enjoy! Toy Story started the digitally animated ball rolling ten years ago but unlike some animated movies that have followed, it remains a must have in any DVD collection due to one simple fact.... It is a very good film. The story is told superbly and you can always find something new when you watch it. There are laughs for everyone, the kids laugh in one place whilst the adults chuckle in another. The animation has been bettered since but not the story. If you like the film then this is currently the very best version of it available. I love Toy Story and all I can say is.... Happy Birthday!