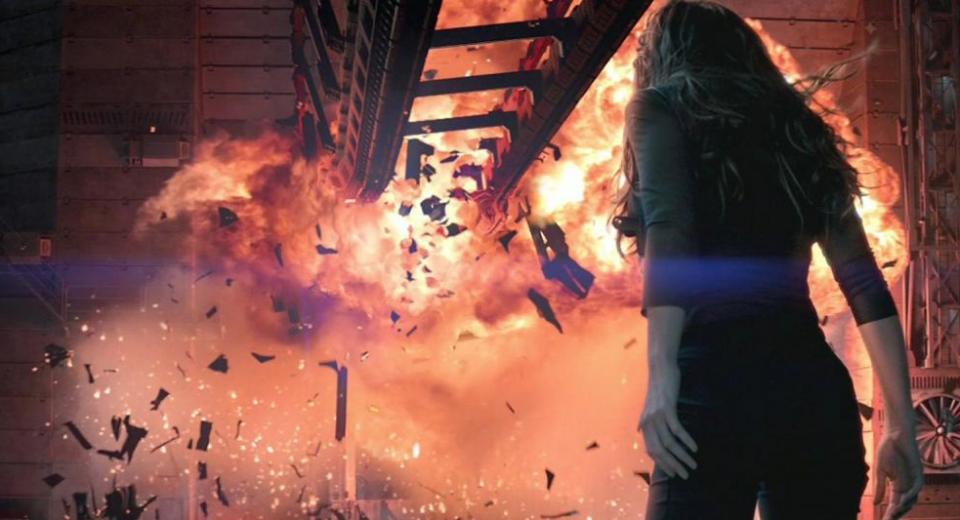 Irrespective of your feelings about the film itself, the Region Free UK Blu-ray release’s 1080p High Definition video presentation, rendered in the movie’s original theatrical aspect ratio of 2.4:1 widescreen, is absolutely flawless. Whether or not you appreciate using five-lens-flares-a-minute footage as a demo platform is another question, but it’s certainly reference material through and through. Detail is stunning from start to finish, offering up flawless skin textures, flawless CG-rendered environments (blending the effects perfectly in with the rest of the proceedings), excellent fine object detail and sumptuous, seemingly boundless backdrops that bring this alternate Blade Runner-esque steampunk future to life as if we were already there. There’s no damage whatsoever; not even a hint of noise; no digital defects, edge enhancement or banding. Perfect. The picture is bright as all hell – although perhaps that’s more an impression gained from all those damn lens flares – but, strangely, the colour scheme is reasonably restrained; vivid and neon-driven in all the right places (Red Light District, the robot army head-up-displays); suitably dour and grimy in the slums; shiny and steel-dominated in the richer UFB; and bolstered at every stage by wonderfully inky black levels that also allow for perfect shadow detail with zero crush. It’s a fantastic-looking film and a fantastic-looking Blu-ray video presentation.

Rather impressively, the audio track also stands up as spectacular, the accompanying Dolby TrueHD 5.1 rendition providing equally superb demo material. Dialogue gets firm presentation across the frontal array, coming across clearly and coherently throughout – from the shouts in the explosive chaos to the quieter, more considered moments. Effects are myriad, ably assisting the visuals in bringing the expansive future environment to life, crafting a wonderful atmosphere to the slums – bristling with life – whilst buzzing with more mechanical technology-driven noises in the prestigious UFB. Hovercars whirr along, speeding across the platforms, but producing a deafening thunder as they crash to the ground; gunshots ring out powerfully – as futuristic Magnums penetrate the environment and fast-firing machine-guns perforate the walls. Explosions rings out and shake up your living room, and The Fall itself is the source of some spectacular effects, drilling down through the surrounds as it rips through the planet. It’s subtle when needed, but even in the frequently noisy action sequences there’s some directionality and surround separation with this expertly-crafted soundscape. The score, however generic – and however repetitive – gets room to breathe across the array and the LFE channel barely gets a second to rest as it thrums along in the background, punching through to the fore whenever necessary.

As a final note I should say that I noticed no audio dropouts whatsoever whilst playing either the Theatrical or Extended Director’s Cut of the movie.

Although it skips the third disc DVD copy available with the US release, the Region Free UK release comes with everything else in terms of the excellent extras, splayed across a 2-Blu-ray set.

On the first disc we get both cuts of the film as well as a Director’s Commentary (available on the Extended Director’s Cut) and a Picture-in-Picture track (available on the Theatrical Cut). The second disc has a number of smaller, far less substantial offerings, mostly bitty Featurettes but overall this is one of the best extras packages that I've come across of late.

This Director’s Commentary has Len Wiseman discussing his creation, with keen focus on the differences between the Theatrical Cut and the Director’s Extended Version; the reasons behind the changes; the work done to bring an alternate version to home formats; and the different ideas each one brought to the fore. It’s a pretty constant offering, even beyond the cuts, with the usual production discussions that span the spectrum of technical to anecdotal; as well as talk of the underlying themes in the film (really?) and his alternate vision of the classic story. It’s certainly an insightful effort that does its best to enhance the production even though you really shouldn’t need a ‘walkthrough guide’ in order to enjoy a movie. Fans will lap it up.

Total Recall: Insight Mode plays throughout the Theatrical Cut of the movie, offering up split-screen background videos and interview snippets as well as dedicated mini-Featurettes that briefly steal your time during occasional pauses. Although there’s a fair amount of crossover discussion with the Commentary, here we get the visuals to accompany that, allowing us plenty of behind-the-scenes footage as well as discussions from the cast and crew along the way. To top it off we get some concept art, pre-vis comparisons and even a trivia track. Again, an engaging, impressive addition for fans.

Science Fiction vs. Science Fact offers up a 10 minute ‘factual’ discussion on the future technology in the film with a Professor of Theoretical Physics on hand to give credibility to the concepts of a robot army, holographic communication, hovercars and even that damn via-the-Earth’s-core gravity lift. Not quite mythbusters.

Designing the Fall is just a 3 minute look at the key centre-piece, with brief discussion on the design and effects-work.

Total Action is split into seven parts, each little more than 3 minutes in length. The title topics pretty-much speaks for themselves: Colin Farrell; The Tripping Den; Destroying Rekall; Kate Beckinsale; Lobby Escape; Jessica Biel; and Quaid vs. Cohaagen. Looking at everything from the contributions of the cast to the relevant action sequences, these are nice little snippets, albeit not that substantial.

Here we get five key scenes explored using the original CG motion storyboard animatics, including Chase, The Fall Fight, Flight and Tripping Den, Elevator Chase and Car Chase (not in chronological order). The most significant of all of them is The Fall Fight, which lasts over 11 minutes, but the rest are considerably shorter.

Here we get 8 minutes of fluffed lines and on-set missteps, actually containing a few amusing moments, where the cast – who do a good job of looking suitably stressed and in-character during the movie – really let loose and crack up.

Len Wiseman’s lens flare-driven remake re-imagines Verhoeven’s Arnie-starring sci-fi action classic with a futurescape blend of everything from Blade Runner to The Fifth Element, Minority Report to I, Robot. Unfortunately – even ignoring the distinct déjà vu you may feel if you’re familiar with the original – this film doesn’t really stand on its own. It asks for an almost Prometheian level of suspension of disbelief in respect to its more ‘scientific’ plot points and, in return, delivers underdeveloped characters, blurred motives and often ill-conceived reality-bending elements with PG-13/12-A neutered violence to top off the blisteringly fast but largely inconsequential action sequences. And it doesn’t even appear to be having all that much fun whilst it’s doing it.

Whatever reservations you may have about the film itself, this is certainly an impressive Blu-ray package, a Region Free UK release that matches up to the US equivalent (well, in all but the DVD copy) and boasts stunning, unequivocally demo quality video and audio presentations, as well as a superb set of extras that covers all the bases and spills out onto 2 discs. Hell, you even get two different cuts of the film.

If you enjoyed the movie then this is a no-brainer must-have purchase. Those intrigued, however, should consider a rental first. The release may be reference material, but the rewatch value of the film is debatable – you’re more likely to want to revisit the Arnie/Verhoeven original rather than sit through this lens-flare fluff for a second time.