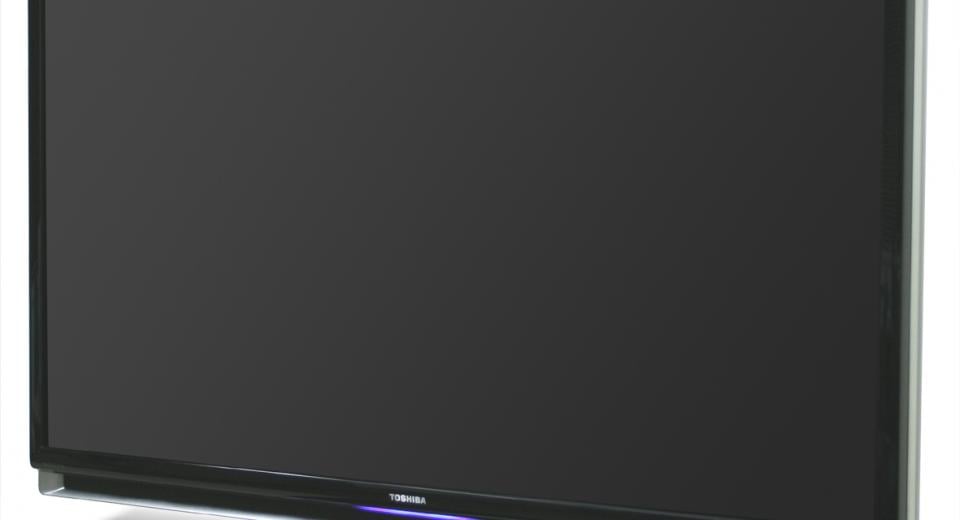 It’s a question that still gets asked: “Is there any point in a Full High-def, 1080p display when the screen size is only 32 inches?” It’s true that a higher resolution display’s advantages really shine at the larger screen sizes, but given that Toshiba have made it affordable on this smaller display in their REGZA line, we don’t think many people will complain. Unboxing the unit from its incredibly slim packaging was a simple affair. Toshiba require you to fix the TV onto the stand with the materials provided, which shouldn’t take too much time, as the display is nice and light. The design of the unit itself is vaguely familiar: a glossy black bezel frames the LCD panel, and a curved silver edge surrounds the bezel. A dotted speaker bar houses both the speakers, as well as a light sensor, and infrared receiver.

We also unpacked the remote control, which is a slightly bland, but completely unoffensive unit, which is also finished in black and silver. All of its buttons are well placed, its range is good, and it fits well in the average hand. A directional pad and "OK" button are placed in the middle, in full reach of the user's thumb.

There’s few surprises with connectivity any more, so we weren’t surprised two find 2 SCART terminals, Component video and audio inputs, 2 HDMIs on the back (with one on the side, bringing the total up to 3), as well as RF Aerial and PC/VGA inputs. OK, there was one convenient surprise – all of these inputs are placed to the top left of the unit, so they’re really easy to access. It sounds insignificant, but it makes connecting things much easier than having to reach around and find the middle of the back panel.

After turning the TV on, the Auto Tuning process began. The 32XV505DB picked up all the available channels in the area, and proceeded to dazzle us with an incredibly bright, blue-tinted rendition of BBC One. Before trying to rectify the image quality, we played with the menu controls to get a good grasp of what each of the options did. Bringing up the main PICTURE menu first presents the user with options for 3D Colour Management – always a nice thing to see on a display, and something which Toshiba seems incredibly consistent in providing – as well as some video processing adjustments for Active Backlight Control, Auto Contrast, MPEG Noise Reduction, and DNR. It didn’t take us long to turn these extras Off: in particular, the MPEG Noise Reduction did more harm than good, which isn’t surprising given that effective cleanup of blocky digital sources is incredibly difficult even on ultra high-end devices. The standard Picture Settings menu was our next stop. Control is given over Backlight, Contrast, Brightness, Colour, Tint, and Sharpness. This menu also conceals the “Black/White Level” option, which really killed detail and gave a bleached out appearance. To get the best quality picture, we turned it Off. Lowering the Sharpness also restored some quality to the image, as did selecting the “Warm” colour temperature.

Last but not least are the Cinema Mode and Colour Temperature options. Cinema Mode controls the Cadence Detection, which in pure English means that the TV will choose the best way of rendering motion, depending on whether Film or Video Camera material is being shown. We were impressed to see the Colour Temperature control here too – more on this in the Calibration section.

The Sound menu also contains some useful tweaks. We imagine that a 32” display will end up in quite a few bedrooms or other "secondary areas", and won't be coupled with an external sound system. The audio output by the TV’s speakers is never going to be of blockbuster standard, but enabling some of the included technologies from SRS did make the sound a little less stuffy, as did turning down the fairly excessive default “Bass Boost” setting.

Calibration – Before and After

After getting things up and running to a standard we were fairly happy with, we pulled out the calibration tools and software to better fine-tune the Toshiba 32XV505DB’s performance. The charts that follow give an idea of the picture accuracy after we performed basic adjustments to Brightness, Contrast, Sharpness, Colour, and Colour Temperature Preset.

We weren’t too surprised to see that the “Warm” setting still has an excess of blue in the image, whereas “Natural” (!) and “Cool” look positively arctic. Our eyes spotted the errors, but the charts confirmed it. The primary colour accuracy was much better than many competing displays, with a small over-saturation of green and an under-saturation of red being our only complaints.

We noted earlier that Toshiba provides a Colour Management System and also Colour Temperature controls in its user menus. This is an attitude to be applauded, and we set to work using the CMS to bring the accuracy of Red, Green and Blue further into line with the Official HDTV standards (Rec. 709). We were very happy with the end result of our calibration, even although Green and Red were still a little inaccurate.

More concerning, though, was the Greyscale Calibration. This aspect of the picture was extremely difficult to get right. Our first attempt produced fairly good (flat) results in brighter areas, but the darker end featured a strong green tint. Instead, we recalibrated to compromise the greyscale tracking more equally, in order to make the errors less visible to the eye.

Why was it so difficult to calibrate Greyscale on this TV? Firstly, the user menus only contain Red, Green and Blue adjustments which affect the entire range. In other words, there is only one control intended to align 10 Brightness points! The hidden service menu's adjustments are an improvement; in here there are more traditional low-end and high-end adjustments for better fine-tuning. Unfortunately, these adjustments were incredibly coarse: a single click of the remote could add a visible tint to the image. After many hours, this compromise was the best we could do. Toshiba’s full range of displays has impressed us with their standard-def video processing in the past, and the 32XV505DB continued this tradition. The TV’s diagonal interpolation capabilities were very good for a display in this price range, with jaggies being effectively smoothed for Interlaced SD material. The American flag test did display one or two distorted pixels in the starry area of the flag, but this is far less noticeable than the striped section breaking into jaggedness.

We were also delighted that this TV can properly detect and compensate for a 2-2 Film Cadence, which means that interlaced Film material is shown without loss of resolution, or motion corruption. Unfortunately, whilst this feature worked properly when we were evaluating quality with our DVD test discs, we couldn't seem to get it working when we were watching movies on the built-in Digital TV tuner, which is a shame.

Moving on with SD processing, the Scaling/Upconverting algorithm in the display does a very good job. Poorer quality processing here can create a large amount of glowing, or “halos”, around edges (much like overdone Sharpening, but occurring for a different reason). This was not the case here.

When fed some higher quality standard-def content, the 32XV505DB looked fairly good with only a basic calibration performed. The inaccuracies in colour temperature were visible to a trained eye, however: Sunny Californian scenes, for example, were visibly chilly-looking. We also noticed some small issues with the “Cinema Mode” film cadence detection, which is not surprising. For example, with CSI: Crime Scene Investigation on Five, we noticed that with the mode enabled, the video processor would often create jaggy combing on screen. This is odd behaviour, and we waited for some other Film-based broadcasts to investigate further. It appears that the display's 2-2 Detection doesn't work on the Digital TV tuner, which is a shame, and means that films broadcast on TV won't look optimal.

We pulled out the recently released Blu-ray Disc of Pixar’s Wall-e, and had a look at how the Toshiba displayed the film with only a basic calibration performed. The first thing to strike us was that, even with a small amount of ambient light, the TV’s blacks looked unusually deep for an LCD display. We suspect that this is a combination of a good quality LCD panel, us lowering the Backlight setting on the TV, and also the gloss coating that Toshiba has applied to the panel surface, which creates the impression of extra depth. This held up unusually well in darker conditions, too, which left us surprised and impressed.

Unfortunately, even with the player’s 24p output mode enabled, the film still showed judder, suggesting that the TV does not handle 24p input correctly and performs an internal conversion back to 60hz. In other areas, however, we were happy with the picture quality. We made sure to enable the 1:1 pixel mapping mode, so that the output of the Blu-ray Disc player was matched exactly to the pixel structure on the TV, making sure that we received the best quality and the entire picture.

Even although we weren’t entirely pleased with the display’s Greyscale tracking, calibration still showed a definite improvement in quality. Although saying that the display provided better “realism” could be counter-productive when viewing an animated film, the colour choices made by the artists were now more apparent. For example, the opening scenes on the burned-out, wasteland Earth had a suitably orange appearance, much closer to the filmmakers’ intentions than the bluer look presented before.

Toshiba’s 32XV505DB is an average 32” LCD display. It's Greyscale performance, even after calibration, was a little disappointing. Fortunately, we were able to confine the errors to the Blue tracking, which our eyes are least sensitive to. We appreciate Toshiba implementing controls for the Greyscale in the user menu, but these are unfortunately quite useless as there's only one control for both the low and high ends. The service menu controls are better, but still don't provide enough accuracy. Ultimately, this resulted in compromised realism and overall performance. We were also irked that the TV does not feature a proper 24p input mode, and presents judder with Blu-ray Disc movies.

However, the Toshiba's most impressive aspects are still worth mentioning, and pull up its final score. Its black level was surprisingly rich, allowing for a surprisingly impressive contrast ratio, and its primary colour accuracy was also very good. The quality of some of its video processing was commendable too, although as we expected at this price point, it wasn't totally bullet-proof.

With all this said, we think it will be almost impossible to find a truly high-end 32” LCD display. The best performance would appear to be reserved for the higher, larger end of the market. Prospective 32XV505DB owners should evaluate just how much they truly need a 1080 panel at this screen size. Although this display won’t find itself without an audience, we wonder if there are better deals to be had, if only you can give up the Full HD resolution.