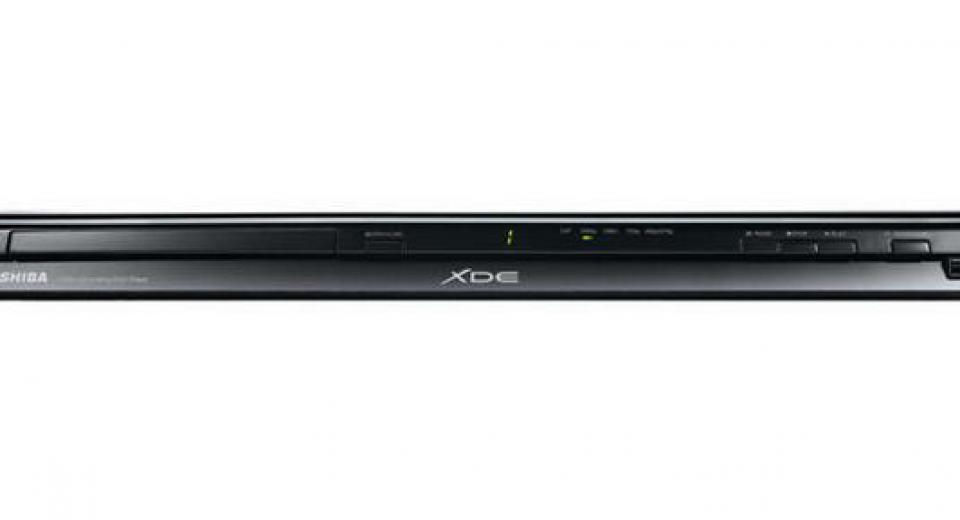 Earlier this year, when Toshiba introduced their XD-E500 upscaling DVD player, I remarked that my review of it was probably the last assessment of a DVD player that you'd likely read on AVForums.com. As it happens, I was wrong, because Toshiba has seen fit to introduce an updated model, the XD-E600.

The E600 seems to be very much the same as the previous E500 model, but it adds a USB port on the front of the unit. From the testing I've done, there doesn't seem to be a great deal of difference between the disc-based performance of the two, so some of this review may seem somewhat familiar to you. In any case, let's get on with the usual in-depth testing for the benefit of those of you who, for whatever reason, aren’t into Blu-ray yet.

The XD-E600 is a slim, shiny black unit which is pretty unremarkable looking (not necessarily a bad thing – I like to keep my eyes on the screen). It's designed with a slight curve to the front and has a stippled grey effect at the bottom of the front face, which means that it matches fairly well with Toshiba's latest LCD TVs. The simple one-line LED display remains, only now it's on the middle of the unit, and Pause, Stop, Play, and Power buttons sit to the right, towards the USB port.

The back panel features outputs for HDMI, Composite Video, Component Video, analogue stereo audio, and Digital (SPDIF) audio outputs in the form of both Coaxial and Optical. There's also an RGB SCART output on this European model.

The player feels slightly better made than its predecessor, which could actually become dented if too much weight was applied to the top of it. Of course, if you're stacking components (be careful!), then this slim device would probably have to go at the top of the pile due to its size, anyway. Pressing SETUP on the remote brings up a 5-tabbed menu screen. Most of the options here are fairly self explanatory, but I'll explain the Video and Audio screens. The former allows us to select an Aspect Ratio (the aspect ratio of the display device we're using the player with), and also a “View Mode”. “View Mode” has four options: Fill, Original, Auto Fit, and Pan Scan. Whoever translated the manual that comes with the player seems to be as confused about what these options do as I am, but for the record, I played back an Anamorphically-encoded 16:9 PAL DVD containing a 2.35:1 ratio film back via the HDMI output on a Widescreen TV, and none of these controls did anything to distort or crop the picture (good). Irritatingly, the player still has no Pillarboxing feature, so playing back 4:3 content on a 16:9 display will result in a distorted, streteched image. Toshiba's manual suggests that you correct the Aspect Ratio on the TV, but this involves scaling the image twice (not a nice idea in practice, although the degradation will probably not be noticeable), and also relies on your TV having an aspect ratio control for HD content. HDTV is inherently 16:9, so a player that upscales SD content to HD resolution should have its own way of taking care of aspect ratio. The next control is “TV System”. Being lucky Europeans, we can leave this set to “Auto”, since we have the luxury of being able to buy any modern display, safe in the knowledge that it will support both 50 and 60hz video. There are also options to force NTSC or PAL output, which will do a surprisingly un-terrible frame rate conversion if the video encoding on the disc doesn't match your selected option (un-terrible only if the content is Film, that is – Interlaced content going through the conversion process looks as poor as you'd imagine). Fortunately, this conversion is not necessary over here, but US readers who are into European cinema or TV shows might be pleased to hear of it.

The Audio tab features only two controls: an option to toggle between PCM and Bitstream output for the digital audio connectors, and also a “Night Mode”, which compresses the Dynamic Range of the audio to avoid waking your neighbours.

The XD-E600's core video performance is good. There is no instance of Chroma Upsampling Error, and all high frequency content is preserved (good luck finding a DVD that has any high frequency content left on it to start with, though). Unfortunately, one row of pixels is cropped from the top of the image, which isn't terrible, but it's still one row too many.

In the Film Cadence detection tests, the E600 did very well indeed. With both the PAL and NTSC HQV test discs, all but one one of the tests passed on both TV systems, which is astounding performance from such a cheap player. The only test that failed was the “Telecine B” PAL 2-2 test, but almost every device I’ve used fails this test, and very little content actually uses it. As is often the case, real-world testing was a little more revealing: like the XD-E500, the player would occasionally fall back into Video mode when playing PAL film titles and momentarily show jaggies. Fortunately, this wasn't too common.

For pure video content (such as sporting events, most TV shows), the player did an average job of smoothing jaggies with diagonal interpolation. On the HQV test disc, none of the bars were entirely free of jaggedness at their edges, but the jaggies were never overly pronounced. In real world usage, I was happy enough with the quality, especially when you consider that video mode deinterlacing is an inherently imperfect process, anyway.

Lastly, scaling was decent, but again, not exceptional. The quality here is about the same as that of Oppo BDP-83, but slightly behind the incredibly crisp HQV-based products, which are my current frame of reference. Of course, almost no DVDs will actually reveal this limitation, because so few of them maximise the format's resolution potential, anyway.

Toshiba'x XD-E600 is a very good DVD player. But, read that last part again: it's a good DVD player. With most online stores having cut the price to around the £60 mark, potential buyers are going to have to ask themselves if it isn't a better idea to spend an extra £40 and pick up a cheap Blu-ray player instead. Although they're not yet widespread at this price, BD players can be had for £99 if you look hard enough, and increasingly, these machines can play back SD DVD correctly, too.

When judging the XD-E600 on its own merits, it becomes clear that this is a good machine with some limitations (the lack of proper in-player aspect ratio conversion, average handling of video-based content), as well as its own strengths (fairly robust cadence detection for film material). DVD-Video is still a relevant delivery medium for low-budget content and niche material, but with BD machines also being capable of playing back the older format and not costing a lot more, Toshiba's DVD-only machine is becoming much less attractive from a value for money standpoint.

If you need a DVD-only player for a second room (or for whatever other reason), then Toshiba's machine will do a good job. However, when it's this late in the game, I can't really do much else other than nod and smile at its strengths, dim the lights, and watch some Blu-ray Discs.