Is Toshiba's Mini 3D big enough to fill your room with sound? 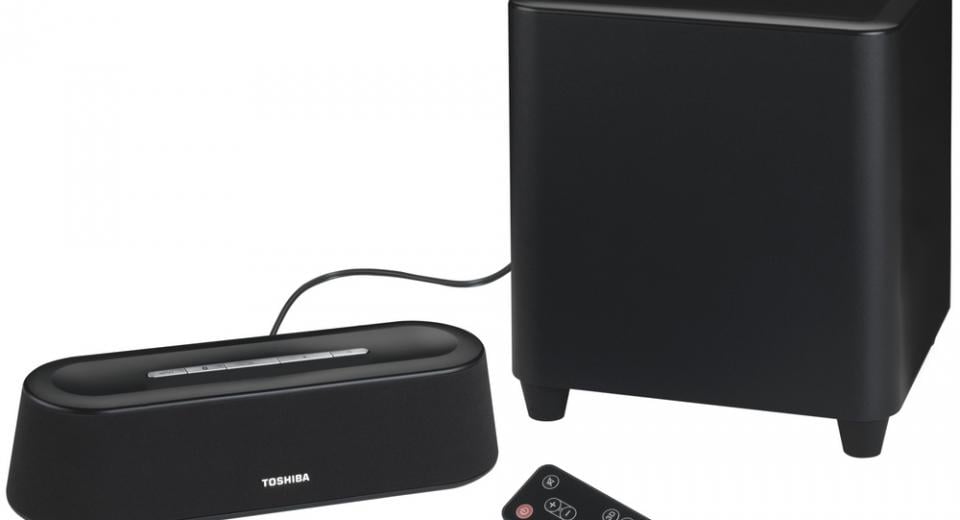 The Toshiba 3D Mini Soundbar enters a burgeoning market at an entry-level status but still promises to bolster the disappointing output of your flat-panel TV's speakers; and heaven knows, they could probably use it. It’s a reflection of the fact that the manufacturers are shifting focus from 5.1 packages toward soundbars that we’re seeing an increasing number of them in for review but the Mini 3D with SBM1W is a little uncommon in both its size and connectivity options. Unusually for a product released in this day and age, the Toshiba soundbar doesn’t feature an HDMI connection and it’s also distinctively compact in its proportions. The questions are, therefore, will the SBM1W deliver a sufficiently wide sound-stage and will it miss a digital video connection? We attempt to answer those questions, and more, with what follows…

As we mentioned in the introduction, the Mini 3D Soundbar certainly lives up to its billing, with the main speaker unit measuring just shy of 30cm in width. In fact it’s almost exactly the same in dimensions as the Kinect sensor for Xbox 360, for those that are familiar with that particular device. To the top of the unit are some buttons for choosing input, selecting Bluetooth mode, Power and Volume. The subwoofer is obviously a little larger, overall, than the main unit but it’s still fairy bijou at 220 x 246 x 220mm. Be warned that the connection of the sub to the Mini 3D unit is via a fairly delicate 4 pin din that requires precise alignment before ultimate insertion, else you risk damaging the pins.

Other, less tricky, connections include a S/PDIF digital optical input, a Coaxial digital input, L/R Stereo and Line in connections – both at 3.5mm. More ethereally, there’s also a Bluetooth connection for streaming music files from your smartphone, tablet or PC. The major talking point here is the lack of an HDMI connection, as whilst the majority of devices do allow for other options, we’re seeing an increasing trend to cut analogue outputs so it rather does undermine its position as a future-proof piece of tech and the lack of either ARC (Audio Return Channel) or HDMI CEC (Consumer Electronics Control) means you won’t be able to use your TVs remote to control the Mini 3D, which does put it at a disadvantage compared to the majority of the competition.

Although it is possible to perform the majority of operations via the buttons on the top of the speaker unit, we can’t imagine many will go down that route so most will be reliant on the credit card style remote control. There’s nothing particularly wrong with the controller per se – it’s responsive and has so few buttons that it’s easy to memorise their locations, making it simple to use in a darkened room - but its tiny dimensions and extreme lightweight nature means it’s very easy to misplace. Yes, we’re speaking from experience.

Although we have been slightly critical of the lack of an HDMI connection on the Toshiba Mini 3D, the inclusion of Bluetooth connectivity is a definite plus. For those with suitably equipped smartphones, tablets and even PCs, the unit is likely to provide a significant upgrade on the native sonic capabilities of that device. We paired up an iPad and Android smartphone in a matter of seconds and encountered no drop-outs during our time with the Toshiba. It’s simply a matter of hitting the Bluetooth button on either the remote or main speaker unit and then accessing the settings in your device, where you should see the option to pair with ‘Toshiba Mini Soundbar 3D’ in the available devices. Once paired the indicator light on the speaker bar will stop blinking. Speaking of the indicator light, that’s pretty much it in terms of visual feedback. There’s no GUI or indicator panel so you’ll have to be reliant on memory to know which input and audio mode you previously had selected. In practice, it’s not difficult to scroll through the available inputs until your hear audio and there’s only 3 audio modes – Movie/Music/Game – plus the option of engaging the ‘3D’ sound effect so it’s not hard to settle on which suits you/your material best but it does lack finesse. We’ll discuss the pros and cons of the audio modes and 3D effect later but it would be nice if Toshiba could find a way of adding in a little more interactivity.

On paper the Toshiba Mini 3D soundbar is around double the power of a typical plasma or LCD TV, in terms of audio output and that would seem about right from our experience with the unit. Inside the casing of the main unit are 4 channels producing a claimed output of 10W with the subwoofer capable of 20 watts at 8 ohms. Those are hardly mouth-watering numbers for your average audiophile but it’s not ultimately ‘how big’ something is but how it’s used that counts for as much and if the Toshiba can live up to the specs, it should blow the average TVs speakers away by some margin. So does it?

The broad answer to the question above is ‘yes’, but there are some caveats. We used the Mini Soundbar 3D day-in and day-out during the course of the review which, around these parts, meant it had a diverse range of material to cope with. As we alluded to in the intro, Toshiba’s mini doesn’t have a great deal of span so it’s at a natural disadvantage to even a TV's speakers in terms of delivering anything like a stereo soundstage but Toshiba’s Sonic Emotion 3D Sound technology does a reasonably competent job of simulating one. The process uses wave field synthesis manipulation to create the illusion and its certainly effective with most TV programming. We’d not recommend it for music, however, as it gives an unnatural stringency, certainly not suited to acoustic tracks. As you’d expect from a sub of such small proportions, bass response wasn’t especially impressive so don’t expect it to rock you out of the armchair.

With films and content with multi-channel audio, the Toshiba Mini 3D wasn’t always quite so successful and the lack of Dolby Digital or DTS decoders is a shortcoming; particularly in the case of DTS, where we’ve noticed the added bitrate helping with soundbars and 2.1 systems in the past. That’s also a point worth noting, your Blu-ray or DVD player needs to be set to output PCM (Pulse Code Modulation) in its digital audio output settings, else you won’t hear anything! There’s no doubt, again, the Mini Soundbar will be an upgrade over almost any TV we’ve heard in the last couple of years but with the likes of the Samsung HW-E350 and Sharp HTSB60 currently occupying a similar price-point, which do feature DTS and DD decoding, it has a fight on its hands.

Mini by name, mini by nature, we can certainly see how Toshiba’s marketing department came up with the moniker. The inherent trimness of the design has both advantages and drawbacks. On the one hand, it’s very easy to accommodate and install but the lack of breadth means it’s potentially challenging to deliver convincing stereo. Connectivity options are somewhat hampered by a lack of HDMI which also means there’s no opportunity to use either ARC or HDMI CEC, which definitely adds to the convenience factor with other soundbars we’ve used. The 4 pin din connector from the subwoofer is also a touch delicate, so caution is needed when plugging in. On the plus side, the inclusion of Bluetooth opens up a world of music streaming possibilities from your tablet, smartphone or computer.

The tiny remote keeps with the ‘mini’ ethos but you might want to keep it in your pocket to avoid it going M.I.A. as it forms such a critical element of the control interface which could use a degree (or two) of more user feedback; one can scroll through inputs and sound modes but unless you can remember where you are when you started, it’s a trial and error affair as there’s no visual indication in the form of an on-screen user interface or display on the speaker unit to let you know. It’s certainly not a deal-breaker but some more interactivity would be good.

Of course all the above are trimmings and the ultimate metric for judging the Toshiba Mini 3D lays in the quality of its audio output. Despite its compactness, the Mini 3D’s Sonic Emotion technology does manage a reasonably convincing sound-stage, especially with stereo encoded material but we found that movies, and other 5.1 content, a little lacking – especially where a DTS soundtrack was present. The Toshiba Mini lacks Dolby Digital or DTS decoders and, at times, it does show. The low range is also a bit lacklustre – there’s only so much you can do with such a small driver – but if all you’re looking for is a decent upgrade on the puny audio output of your TV, for minimal cost, you could do worse.