Another good mid-range TV from Toshiba 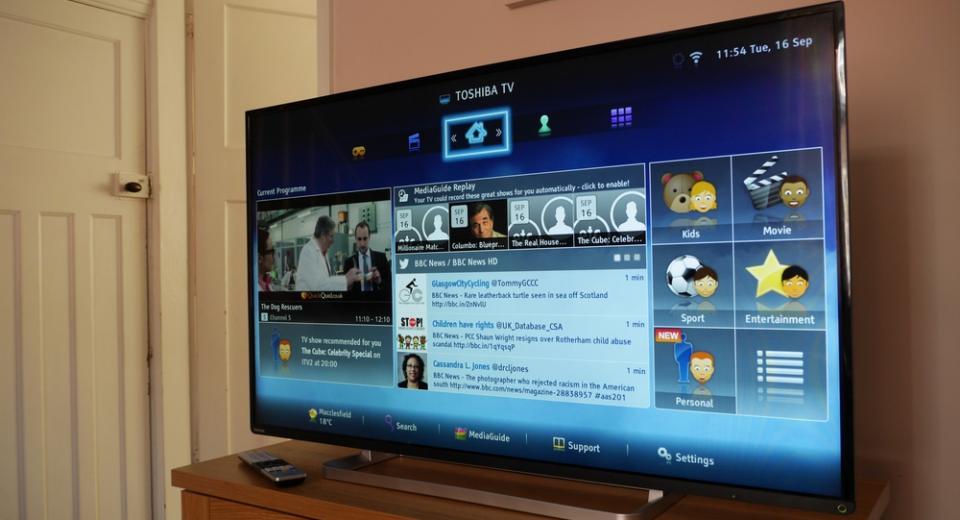 The Toshiba L6453 is a Full HD LED LCD TV near the top of the manufacturer’s range and comes in a 42-inch screen size, as well as the 47-inch 47L6453D up for consideration here. The L6 series sits just under the flagship L74, which impressed us when we had it in for review recently. Like its stable-mate, the L6 Series is also equipped with Toshiba’s Smart TV Cloud platform and you can buy it for £430 for the 42-inch and just shy of £580 for the 47-inch model, at the time of writing in September 2014.

Who is it for?

The L6453 is for those looking to enter the market above the budget level but yet not spend the earth for a Smart TV experience. It doesn’t lay any serious claims to being provided for the videophile market but we’re hoping at least some of the picture quality improvements we saw with the L74 will be carried down the line.

How does it look?

We think the L6 series has a pleasing design. It’s an all-plastic construction, so very lightweight, and we like the rounded-off corners at the bottom. The silver supporting stand contrasts the black and charcoal grey of the screen-surrounding bezel, which in turn is very narrow and contemporary looking. For those thinking of wall-mounting as an option, the 7cm thickness of the chassis might be a consideration but we’re not concerned if the relatively portly dimensions mean it will have good backlight uniformity.

How do I connect to it? If your equipment has an HDMI output, use that, and the L6453 can take up to 4 HDMI connections, at the back and sides. The HDMI 1 connection supports ARC (Audio Return Channel) so that’s the one for your soundbar, or other compatible audio kit, whilst HDMI 3 is MHL (Mobile High-Definition Link) compatible, so if you fancy seeing high definition content directly from your up-to-date smartphone, you can hook it up there.

For your older video equipment, there are Scart and Component inputs but you might want to consider upgrading if that’s all they have. The L64 is a high definition TV, after all, and whilst component can carry HD, it’s rapidly becoming an outmoded format. There are two means of getting sound out of the TV – besides the speakers – with a headphone jack and digital optical connection which, again, you would consider for a soundbar or AV Receiver without an HDMI connection.

Is it easy to use and control?

Toshiba has used the period between 2013 and 2014 to improve the responsiveness of their TVs and that has paid off quite well. You still sometimes get a ‘System Loading’ message on start-up but it lasts only a couple of seconds before you’re up and running and only seems to happen when the TV has been off for quite some time. The supplied remote control is relatively large but that means the buttons are easy to locate, even if it’s not the most aesthetically pleasing device. The menu systems are fairly easy to find your way around and we’d advise choosing one of the ‘Hollywood’ Picture Modes for the most accurate images. Switching inputs on the L6453 elicits a temporary blue screen, which we don’t really like (not sure why), but thankfully that can be turned off in the settings menu. Like the menu system, Toshiba’s Smart Cloud TV Service has benefitted from a behind-the-scenes improvement to the processing speed. We still experienced some momentary hang-ups and the L64 was not immediately ready for online action on coming out of standby but it’s still an easy to use service with a pleasant – and customisable – interface. If Smart TV features are very high on your agenda, there are, in all honesty, better choices but for what most people use a Smart TV for, i.e. YouTube, BBC iPlayer and Netflix, the L6453D makes a decent choice. There is also Blinkbox and you get a pretty competent web browser, a well-supported media player – USB and DLNA – and various music apps and simple video games to have a play around with. You can get a more in-depth look at the Toshiba Cloud TV platform in our dedicated review. Does it have good speakers built-in?

It could be a lot worse, that’s for sure. Don’t get us wrong, the L6 series is no TV/HiFi hybrid but the 2 x 10W speakers make a good fist of dialogue and provide a reasonably spacious sound field. You get a surprising number of options in the Sound menu, too, with various modes and even a graphic equaliser, with five frequency adjustments, to tinker with although we’d advise mostly leaving alone in the default ‘Standard’ sound mode. We would, of course, recommend an outboard solution, where finances permit, and we’ve put together a guide for some of the best current sound solutions for you.

As we can see in the chart below left, there was a fairly obvious excess of green in the greyscale of the untouched Hollywood Picture modes but they were still the most accurate out-of-the box options. Be warned, the Hollywood Day mode is incredibly bright by default, however, so you’re best starting with Hollywood Night and gradually cranking up the Backlight control, if you need more luminance. You will also want to ensure that the Active Backlight Control feature is disabled, else all shadow detail is crushed out of existence.

The graphs, below right, show that the L6453 was hitting most of the marks of the HD Rec 709 colour targets. The only real issue we have is with the luminance of the blue primary at full saturation levels and we certainly weren’t relishing the prospect of tackling Toshiba’s notoriously erratic colour management system. Colours were very accurate out of the box
Post Calibration

As we alluded to above, Toshiba’s calibration controls, though plentiful, aren’t the best. So, it was fortunate we were able to get things ship shape using the reliable 2 point White Balance controls, together with some of the more basic front panel options. Greyscale tracking was then far better, with errors well in the tolerable areas, and we also managed to rescue the shadow detail from the clutches of the dimming system. Fortunately, we didn’t even have to touch the ‘ColourMaster’ controls to get a near reference gamut performance as everything slotted in to place following the greyscale calibration. It’s nice when that happens! Actually, for most of the time, yes it does. Toshiba has definitely made some fairly big changes in how some its TVs are delivering their images in 2014, and the results are impressive. There’s a less processed look to the L64 than we’ve seen with some of their earlier TVs but that’s not come at the expense of them losing any detail. All High Definition sources looked great, whether that was from TiVo, Blu-ray or streamed from Netflix, Now TV or Amazon and the generally solid video processing meant that better SD sources also looked quite good.

We also took the time to check out some (lots) of sport and the motion handling was reasonably convincing and screen uniformity on panning shots better than average for an LED LCD TV. There are no special motion processing technologies on board the L6453 but it does handle film material correctly, in both standard and high definition form.

The colour accuracy of the L6453 is a major factor in its ability to provide pleasing pictures and even prior to detailed adjustments, it scored well there. Black levels were acceptable for bright(ish) living room conditions where an effective filter gives the impression they are deeper than is the reality. A measured contrast ratio of around 750:1 is far from an impressive figure but room conditions often play a far more significant part than the raw numbers.

What’s not so good?

It’s sometimes the case that a TV with relatively weak dynamic range can be rescued by clever LED dimming systems. That’s not the case with the L6453D, however, as its version – labelled Active Backlight Control, in the menus – is very poor. The system inside the L74 is powered by Toshiba’s CEVO processing and is clearly better than the one here, which frequently, and very noticeably, fluctuates levels of on-screen brightness. The other issue we found was that dark screen scenes suffered from patches of uneven light, dotted around the perimeters of the screen. You could largely mitigate this clouding using the dimming control but, then, you get the issues noted above.

It’s a very good TV for gamers, with one of the lowest input lag measurements we’ve ever recorded. At just 18.3 milliseconds latency to controller input, you’ll be ahead of most of the pack, online, and for games running at 30 frames per second, you’ll be absolutely on top of the action. The Game viewing mode on the 47L6453 does need a few picture adjustments but it can be made very acceptable in fairly short time.

It's a gamer's dream with incredibly low input lag

We’re not going to make up your mind for you but with the 47L6453 currently available to buy for below £580, it’s definitely one to consider in the price bracket. The L6453 provides good pictures, a stylish design and a decent suite of features, for your money, and certainly doesn’t get very much wrong. The Achilles Heel of this particular TV is its mediocre black levels, which means it’s not one suited for low room-light viewing, but it stands up well otherwise.

What else could I consider?

There are plenty of other TVs in this section of the market, although there’s no denying the Toshiba is priced very competitively. You might want to take a look at the 48-inch Panasonic AS640 which has a really good picture and slightly better Smart TV features than the Toshiba. Similarly the Samsung H6400 comes in a 48-inch screen option and boasts an incredible range of features, with pictures to match. Both cost a little bit more than the L6453, however, so you’ll need to balance out your requirements against what you’re prepared to pay.