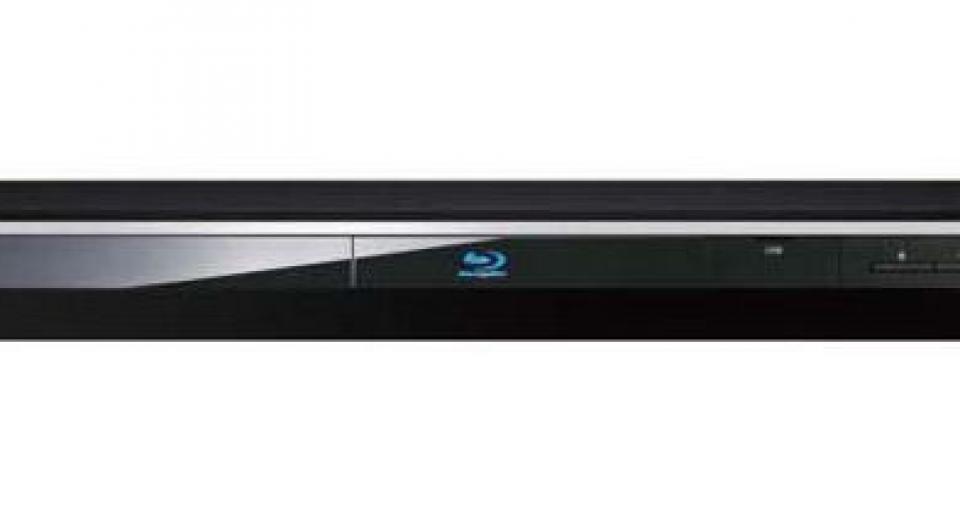 Readers of an older vintage may recall a Toshiba advertising campaign that borrowed heavily from an Alexei Sayle song; it went ‘Hello Tosh, Gotta Toshiba?’ (listening back, it’s Ian Dury!) and although it was fairly crude marketing, by modern standards, it served its purpose in raising the profile of the manufacturer. Fast forward more years than we’d care to remember (it was 1984, for those wondering) and Toshiba have never managed to create a marketing splash like it since. Which is a pity as they produce some fine products that seem to largely go unnoticed.

The 3D Blu-ray player market is becoming fairly saturated and prices have dropped dramatically in just a matter of a couple of years, as consumer apathy for 3D viewing has become apparent. The Toshiba BDX3200, at the time of writing, is available online for below £100 so even if you’re not interested in the third dimension of viewing, it represents potential good value as an old fashioned 2D spinner plus giving the option to dip a toe in to 3D, in the future. Just what value that represents is dependent on how it fares with our set of objective tests - so let’s see what it can do…

There’s nothing really remarkable in the design of the Toshiba BDX3200, not that we’re complaining as we don’t want our playback devices shouting ‘look at me’ from the confines of the rack. The black fascia slightly juts out as a prism and is topped by a metallic strip, whilst there’s the Toshiba logo to the left of the disc loading mechanism that emerges from behind a flap. In the centre we have the display panel featuring the Blu-ray disc logo and moving right, there’s a neat fold down flap housing a USB input and, to the far right, buttons for Stop, Play/Pause, Open/Close and for powering the player on and off. We like the fact they’re not touch sensitive, you can’t beat the analogue feel of a ‘proper button’. Overall build quality is what we’d expect at this price point, i.e. not spectacular but as long as you’re not planning to stack a load of heavy objects on top of it, it’s not going to fall to pieces.

The BDX3200 isn’t blessed with a multitude of connections, in fact it’s pretty much the bare minimum. Aside from the essential HDMI port, there’s a coax digital audio out, stereo audio and composite video jacks and a LAN connection. And that’s it, so no component video and the SPDIF digital audio connection is coax only. There’s also no secondary HDMI for taking HD audio to non 3D capable AV Receivers. So it’s worth thinking about how your existing kit will interact. We had no problems with the remote control, being of a good size and with well placed, rubberised buttons. There’s also some handy shortcut buttons, such as for changing resolution and entering the Media Centre to save the user having to delve in and out of the main menu. It would have been nice to have some backlighting as we prefer our movie viewing in very subdued lighting but you’ll soon learn the placement of the key buttons by touch.

Menus and Set Up

After a very quick and helpful wizard took us through initial set up of the BDX3200, we were presented with a very nice, simplistic GUI that had everything in the place we would want it. In fact the higher tier Toshiba TVs could benefit from sharing a similar structure. The main menu is split in to four sub menus - General Setting, Display Setting, Audio Setting and System Information.

From the General Setting menu there’s access to five further sub-headings, System, Language, Playback, Security and Network. The System items include such options as setting discs to auto-play on loading, a Screen Saver and whether to engage CEC (aka Regza Link) that enables control of compatible devices through the Toshiba remote control. This, whilst sounding good, generally leads to more bother than it’s worth. The Language option is self-explanatory as are Security and Network, whilst the Playback options include settings for PIP (Picture in Picture), Angle Mark – allowing enabled discs to be viewed from alternate viewpoints – and Last Memory, which will resume play from the last played point when enabled although only some Blu-ray discs support the feature. It should be mandatory!


The Display Setting Menu houses most of the interesting features, as far as we’re concerned, and even a surprise or two, therein. The Display Menu houses three sub options - TV, Video Process and Motion Video Process. The TV item has options for Screen Ratio, Resolution, Colour Space, HDMI Deep Colour, HDMI 1080p/24 as well as the limited 3D options. We can’t dictate what Colour Space is best for all displays but YCbCr422 will be a fairly safe bet for most. We’d certainly advise ensuring 1080p24 is set to On, if your display supports it, and a 16:9 Normal setting for screen size wont stretch 4:3 content. Under the Video Process heading, there’s a further collection of settings from Video Adjust as well as a Sharpness setting ranging from Low to High. The Video Adjust settings comprise the usual television front panel controls of Brightness and Contrast in addition to Hue and Saturation. The Saturation control works like the Colour controls found in TVs and it’s certainly nice to have the option to fine tune these picture options where they can’t quite be done display side.

Furthermore, and the surprise we alluded to earlier, under the curiously named Motion Video Process menu there’s even a full colour management system allowing alteration of both primary and secondary colours on all three axes -Hue, Saturation and Brightness (aka Luminance). We’ve had our trials and tribulations with Toshiba’s CMS in the past whilst calibrating televisions but we weren’t going to let the opportunity pass. Faced with a couple of displays without fully fledged CMS’s, the BSX3200 was able to rectify some small errors in the secondary colours (Cyan/Magenta/Yellow) without introducing any nasties in to the picture, which is the problem found in the Regza TVs. We can’t say the same about using it for the primary colours (Red/Green/Blue) but it’s certainly a welcome addition for the calibrators out there and adds a new dimension to the player. To make use of the CMS, one most select the Custom Video Mode setting and we’d advise either this or Standard as Vivid and Cinema introduce processing.


The Audio Setting Menu allows the user control over the sound output over the Coax and HDMI connections with choices of PCM, Bitstream and Re-encode. The Down_samp item is a little mislabelled and allows for sampling frequencies of 48, 96, and 192 kHz. The final item, DRC (Dynamic Range Control) will soften effects whilst keeping dialogue clear, if you’re sensitive about waking up the family and/or neighbours. We’ll leave that one for your conscience to decide. The final sub-menu, System Information, will display current software version as well as the mac address ascribed for those that have made use of the LAN connection.

Of late, this section has become the place to outline all manner of Smart functionalities, from social networking widgets, video on demand services to DLNA networking and Skype video calling. This is not the case for the Toshiba BDX3200KB as it doesn’t really do much but playback Blu-rays (both 2D and 3D) and DVDs. There’s token support for MP3 and Jpg’s via USB flash devices but frankly we’re not bothered one jot, it was far more exciting to see a CMS in the Menus but perhaps that’s just us? The short message is, if you’re looking for a Blu-ray player as a way in to the Smart TV revolution, the BDX3200 isn’t the one you should be looking at. For the record, the Toshiba supports the Dolby TrueHD & DTS HD audio formats as well as BD-Live but you’re not surprised by that, we can tell!

In all of our testing, so far, we’ve yet to come across a 3D player that was incapable of doing its job with 3D material and the BDX3200 is no exception. That is to say we experienced the exact same sense of depth and dimensionality to images with no crosstalk, or any other kind of artefact, being introduced. We tested that the signal being sent was full resolution with a display we knew capable of resolving it and, again, there were no issues. So we can confidently state, it’s as good as any other player we’ve tested for 3D playback.

Again, other than a rogue Sony player that did some unpleasant things to the calibrated gamma curve, we’ve seen little to no difference in 1080p output between the players we’ve reviewed. What we do see, however, is that certain picture modes will introduce their own ‘taint’ to the signal and as we mentioned earlier, both the Vivid and Cinema modes did this with the BDX3200. We didn’t bother to measure the effects for Vivid, it was just too awful to look at, but the Cinema mode was interesting in that it applied a linear alteration to the gamma curve. Our review samples are generally calibrated to a 2.2 target and the Cinema mode typically altered this toward 2.3. It’s not the biggest crime and, in fact, some displays lacking gamma controls and with unsatisfactorily response could benefit. In all other facets the signal was barely altered but if you’re happy with the set up of your display, use Standard. For those that like to calibrate, Custom provides an unadulterated picture but with the added bonus of the (semi-effective) CMS.


Running through the Spears and Munsil disc revealed that the player is capable of producing full luma and chroma resolution, meaning our output won’t be losing any fine details, even if the display isn’t capable of showing them.

If we’re accustomed to seeing 1080p24 Blu-ray disc look 'like for like' between players, there’s certainly always some differences when it comes to handling interlaced material. Whilst the BDX3200 didn’t flunk the tests, we’ve certainly seen some better deinterlacing from the likes of Panasonic, Sony and Samsung and it was showing some unusually noticeable jaggies on the diagonal interpolation tests. That aside, everything else was handled well, including cadenced detection of both the most common 2:2 (PAL) and 2:3 (NTSC) cadences.

The various Toshiba TVs we’ve seen recently have shown some patchy performance here but there were no real problems, whatsoever, with the BDX3200’s output of DVD material. Both 480i and 576i content was scaled well, if just a tad softly, with no undue loss of detail or ringing artefacts. Where the Regza televisions have sometimes fallen down with cadence detection, the Blu-ray player displayed no such errant tendencies, obtaining and maintaining a lock within seconds. Overall, we were happy enough watching a couple of DVDs through a 55 inch display, if only for old time sake as we’re pretty much Blu only these days.

This area of testing is gradually becoming an anachronism with most players and the Toshiba BDX3200 was no slouch, typically displaying copyright warnings in under 30 seconds. Where load times were longer was universally due to the amount of BD Live content on the disc. We guess some people like it, we just don’t know any ourselves.

Certainly no gas guzzler, the BDX3200 showed a steady 7w of consumption during playback and 0.5w whilst in standby.

The Toshiba BDX3200 3D Blu-ray player barely puts a foot wrong. It might not be the best looking player, it doesn’t come stuffed to the gills with smart features and there are players with more comprehensive connectivity but, what you do get for typically sub £100, is a spinner equally as capable at handling Blu-ray discs - in either 2D or 3D - as any we’ve tested. We even found that our old DVD’s were handled with due care and attention. It’s a synch of a Recommendation, especially given the price, and we’d urge you not to ignore this Toshiba.