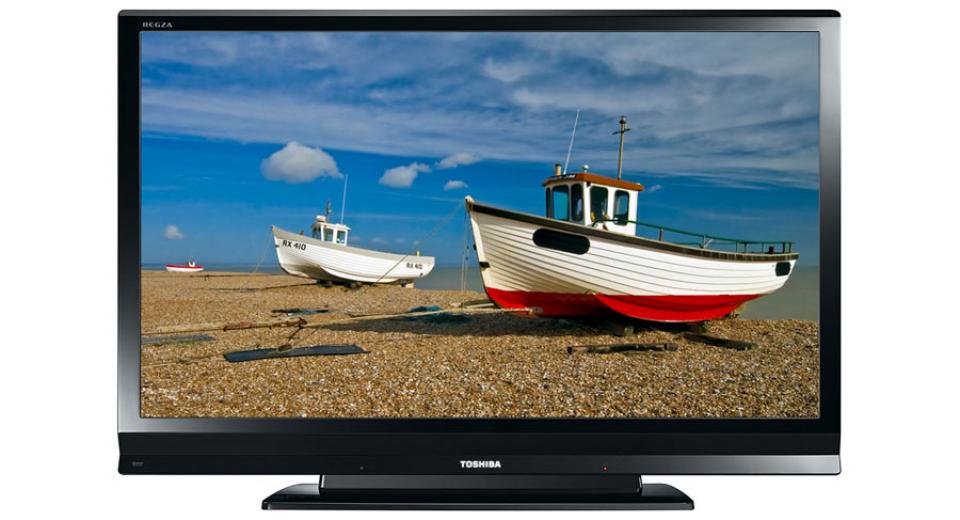 The 37AV635D is a 37" display in Toshiba's entry-level AV Series. It's driven by Toshiba's "MetaBrain" processor, which is new (at least on these shores), and features Resolution+, which is the latest process to arise from Toshiba's apparent desire to be the market leaders in upscaling standard definition. Such is their desire, in fact, that they've recently created quite a bit of confusion by promoting their TVs as featuring SD-to-HD Upscaling - a technology which I'm sure is revolutionary to the company's marketing department, but is in fact, a feature of ALL fixed-pixel consumer displays!

Anyway, even if it's mispromoted, any attempts at making SD that more watchable are always welcome. Under the hood, Toshiba's TVs routinely feature a host of calibration options and controls and capable standard-def deinterlacing, and, when coupled with a capable enough LCD panel, the results can be very nice indeed. Let's see if the 37AV635D has the juice. Like the company's XD-E500 upscaling DVD player, the TV is styled in gloss black, with a bright, glowing company logo in the centre of the bottom frame. That logo can, of course, be turned off in the on screen menus if it irks you. It's a decent-looking, but somewhat unremarkable display. The TV doesn't come attached to the base, but included are screws, an allen key, and instructions which should get you going quickly.

The remote control, on the other hand, is a nasty little piece of work which feels like it'd be better paired with a supermarket TV, or a cheap set top box. It is, however, functional enough, and the TV responds to its input quickly.

On the back panel, we have 3 HDMI inputs, an RF aerial input, 2 SCART terminals, and the mandatory Component video inputs. There's also an RGBHV/"VGA" PC input and accompanying 3.5mm audio jack, an Optical audio output, and an RS232C port, which I presume can be used to control the TV externally. The TV's side panel has a 4th HDMI input, S-Video and Composite video/stereo audio inputs, and a headphone output. That should be enough for almost every user.

Believe it or not, but I thought my 37AV635D review sample was a dud when I first received it. After plugging in to various different outlets, no amount of button-mashing would get the display to turn on. That's because Toshiba has designed this TV with a "Full Power Down" option, meaning that the TV has a real Off switch (located on the back left of the display, away from all the other buttons) and has to be manually turned on. Hey, if it saves energy, then it's a good move! Toshiba's menus have been overhauled, and now feature slick black and green displays, rather than the blue and yellow pastel-coloured designs of old. They give a highly commendable level of control, which goes far beyond the TV's price point. Firstly, there's the usual basic controls such as Brightness, Contrast, Colour, Tint, and Sharpness. There's a "Control Visualization" screen, which shows a histogram showing video input levels, and some sort of gamma display, and lastly, a shortcut to a separate "Advanced Picture Settings" screen.

There is really nothing else here that we could ask for; Toshiba have really delivered the goods in terms of the control offered, and they've done so even on a lower-price display like this one. And, each set of picture settings is saved per-input, so things can be calibrated to perfection for each device you connect.


Calibration: Before and After

Prior to calibration, the 37AV635D was not a pretty sight. Both the "AutoView" and "Movie" modes produced a picture which was far too dark - quite unusual given that consumer TVs are usually eye-wateringly bright when first unpacked. "AutoView" makes use of an ambient light measurement for some of its settings, so it's highly probable that other people's experiences will be different here, and my room lighting was throwing things off. The usual problem of the default settings having too high a colour temperature was present, so images were clearly blue-tinted. Primary and Secondary colour reproduction, on the other hand, was much better than average, with fairly good levels of accuracy relative to the [tip=Rec709]Rec. 709[/tip] colour standard.

Calibrating Black level on this display was actually surprisingly difficult, because the LCD panel just cannot produce blacks deep enough to be convincing - meaning that seeing actual video black for the TV's backlight illumination was somewhat hard. Toshiba do at least allow you to lower the Backlight lamp intensity, but this will simply dim light output, and won't buy you any extra contrast.

Regardless, I eventually managed to set Brightness, Contrast, and Colour (with the supplied Blue-only mode) optimally, and took these measurements: As the RGB Level Tracking and RGB Color Balance displays (top graphic) indicate, the overall colour of grey was excessively blue (a common problem with uncalibrated consumer TVs). Individual colour reproduction was, as usual for Toshiba displays, very good, although green was visibly undersaturated, and magenta was slightly off target. Colour luminance levels were just about perfect, which is very unusual.

Using the controls provided, I measured Greyscale, Colour, and Gamma. Adjusting the "Static Gamma" control improved the performance tremendously, bringing the TV's overall gamma to our intended measurement of 2.2, creating a much better balance of dark and light. Post calibration performance was improved tremendously. Greyscale tracking was a little problematic at the higher end, with slightly overemphasised red. It was possible to fix this problem, but only by severely limiting the Contrast - something I decided against doing, as the TV's contrast performance is not spectacular to begin with. For the most part, though, the TV hit the required colour temperature of 6500k well, and the discolouration at the high end wasn't too noticeable outside of test patterns.

You'll notice some changes in colour performance after calibration. The most interesting of these is with green. Normally when we see a TV undersaturate colours, it's because of a physical limitation in the LCD panel module itself (this is true in a few cases on this display). With green, though, I was able to restore correct Saturation, but at the price of overdoing Luminance. It's possible to have correct Green Saturation OR correct Green Luminance, but not both at once. But, you might think, this TV has a 3D Colour Management System - shouldn't it be possible to obtain a perfect result? Not in this case. Lowering the "Brightness" control for green to hit correct Luminance produced an incredibly bizarre-looking result, so a compromise was made accordingly.

I wasn't surprised that the 37AV635D did a great job of smoothing video jaggies, because Toshiba's TVs have typically performed well in this area. According to the company's somewhat secretive technical specs, the TV features Faroudja's DCDi algorithm, so the performance wasn't too surprising. The tried and trusted "American flag" test video looked fantastic here as a result of this processing.
What was surprising is that the TV fails to detect and compensate for the PAL 2-2 film cadence, even with the Cinema Mode option turned on, so I recommend "bringing your own" Deinterlacing by sending pre-upscaled signals to the TV (these could be from an upscaling DVD player, or AV processor). Toshiba's entry level models haven't had a problem here in the past, so it's odd to see the 37AV635D failing this test now. The American-style NTSC 3-2 test passed correctly, as always.

Scaling performance was decent, but as usual, scaling standard definition to the 1366x768 resolution LCD panel didn't produce quite as clean a result as scaling to a 1920x1080 panel. Regardless, there's not a lot of ringing, and a good amount of detail is captured. Likewise, DOWNscaling 1920x1080 sources looked decent (albeit with a little ringing/"overshoot" around small details). Most people won't notice the missing pixels.

As mentioned above, the 37AV635D features a 1366x768 LCD panel, rather than the now-standard 1920x1080. There's been a lot of debate as to whether or not you really "need" a 1080p panel in a TV, with some users swearing by it, and others noticing no appreciable difference. It's true that resolution is not the only factor affecting a TV's performance - after all, a properly set up 1366x768 panel will look better than a 1920x1080 one which hasn't been calibrated - but as someone who's unusually sensitive to resolution shortcomings, I did miss my own Full HD panel.

Although the calibrated picture was very accurate for the most part, I again found myself disappointed by the LCD panel's contrast performance. Black level is tremendously important to picture quality, and the 37AV635D was struggling to display dark scenes in anything other than grey. Brighter content fared better, of course, and it's here where the calibrated picture quality characteristics were at their best.

Toshiba do include two options called Auto Brightness Sensor and Active Backlight control to regulate Backlight output. The latter of these did help fight off the "LCD mist", but the fluctuation in brightness control was fairly noticeable. It is commendable that the user is given the choice, though.

After complaining so much about the panel, though, it's only fair to mention that its motion performance is much better than many.

There's a good dark test scene I often use near the end of the "Resident Evil: Apocalypse" Blu-ray Disc. LCD displays with black response time problems cause the shadows around actress Milla Jovovich to smear and drag over her face as she walks through the room. The Toshiba handled this very well indeed.

SD performance, of course, features the same contrast limitations as HD: the quality bottleneck is the panel itself. This is a pity, because the SD processing that lies beneath, as explained in the "Video Processing" section, is really pretty good. Toshiba's "Resolution+" edge enhancement algorithm is too overbearing for most digital TV broadcasts, emphasising edges and textures as well as compression artefacts (garbage in, garbage out), so I soon tired of it in these cases. For higher quality contents, leaving it on its lowest setting was interesting for a while, but I soon turned it off in favour of the more natural look.

The 37AV635D includes a "Game" mode, which is activated by selecting the "Game" picture mode (you can't use "Movie" settings and turn Game mode on, for example). So, both modes need to be calibrated individually. In all honesty, I couldn't detect a difference in responsiveness between both modes, but used the Game option to be on the safe side. And, the performance was very good (that is, very responsive) indeed.

The 37AV635D has a couple of things going for it: it has a fantastic level of control, which allow the TV to be calibrated for mostly excellent Greyscale and Colour reproduction. As usual for Toshiba, its SD video processing is also better than many other sets, despite being imperfect. Like a couple other LCD TVs we've reviewed lately, though, a lot of this ends up being in vain, because these images are forced to go through a substandard LCD panel before they reach your eyes. Whilst its motion performance is commendable, contrast is lacking, leaving the choice between bright whites and grey blacks, or dulled whites and more convincing blacks. With that said, at least there is the choice - some LCDs on the market today still don't feature a Backlight control at all! Likewise, the TV's low input lag means that video games are great fun on the 37AV635D.

I've seen quality Toshiba LCD TVs in the past which combined great video processing, good accuracy, and a great LCD panel. Unfortunately, it's that latter component which lets the 37AV635D down. Whilst by no means a bad display, there are competitors out there with better contrast performance.