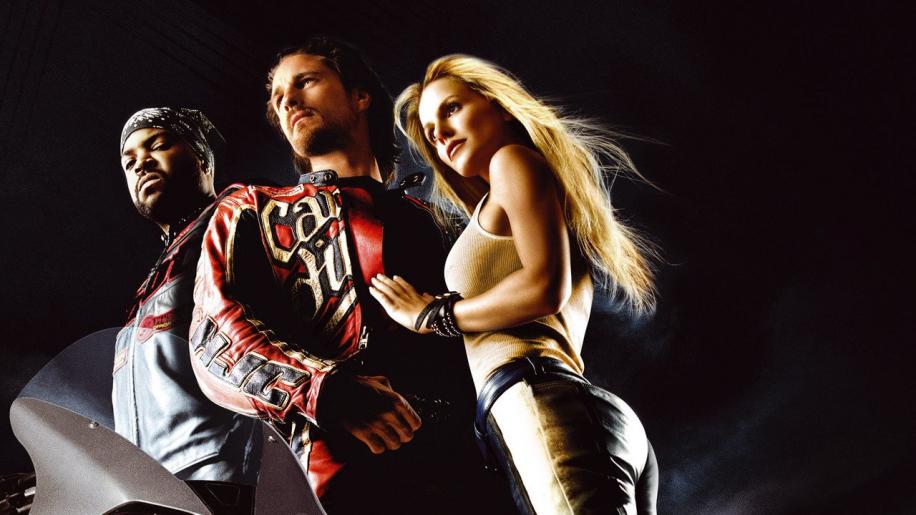 ”Torque has been given a top class picture with sharp, vivid colours, perhaps a touch over-saturated, and a mostly clean image that suffers only slight noise incursion. I didn't even notice any edge enhancement. What I want to know is - why has such solid image quality been attached to such a banal movie?!” - That's what I had to say for the region 1 release... and it's more of the same here, although perhaps down to a few more scanning lines this Pal picture looks just a tad more solid to me, but overall things are very similar - I would say that neither wins hands down in a comparison.

The layer change, which takes place at 44:12 is just as awkwardly placed as its region 1 brother and still comes right in the middle of an “important” scene, likely to completely spoil the desired effect. Aside from that little hiccup, this is also a very nice transfer. Interestingly, the single Dolby Digital 5.1 track differs from its region 1 counterpart and for some reason we get a slightly cut down 384Kbps affair. If I'm perfectly honest, though the only real difference that I could make out - and comparing DVD audio tracks is not always as straight-forward as it may appear, and ones memory is easily bamboozled by the time it takes to change discs - was that this region 2 release seems to be a little louder than the region 1. Other than that, things are very similar with some deep, rumbling bass from explosions and motorbike induced mayhem. Rear channel effects are plentiful and particularly full sounding. As before, though and despite its loud, brash nature, I found the audio side of things involving, but a little tiring.

With an identical set of extras - why should my review be any different?!

First up is the Actor Commentary which is fast paced and, for the most part, a witty and enjoyable affair. Listening to the guys and gals (there's about eight of them altogether!) was a bit jarring for me... they just seem so proud of what they've achieved. Which is fine, I guess... the only thing is I happen to think it's a pile of poo! Accomplished poo, perhaps, but poo nevertheless.
The Technical Commentary has a similarly crowded recording studio, but is at least a little more laid back in nature. Again if you are a fan of this movie I'm sure the whys and hows of particular scenes and stunts will be enjoyed.
The Racing and Train Animatic features has Director Joseph Kahn discussing how he laid out in storyboard fashion his ideas for the movie. These are interesting, if very short affairs.
An average movie gets a slightly above average set of extras.

It's big; it's bold; and yes I guess it could be described as the epitome of a “popcorn” flick - trouble is, I'd rather have had a hotdog. Torque will have its fan, I'm sure, but for me it misses the mark and I recommended this as a rental.