I feel the need, the need for Top Gun in 4K! 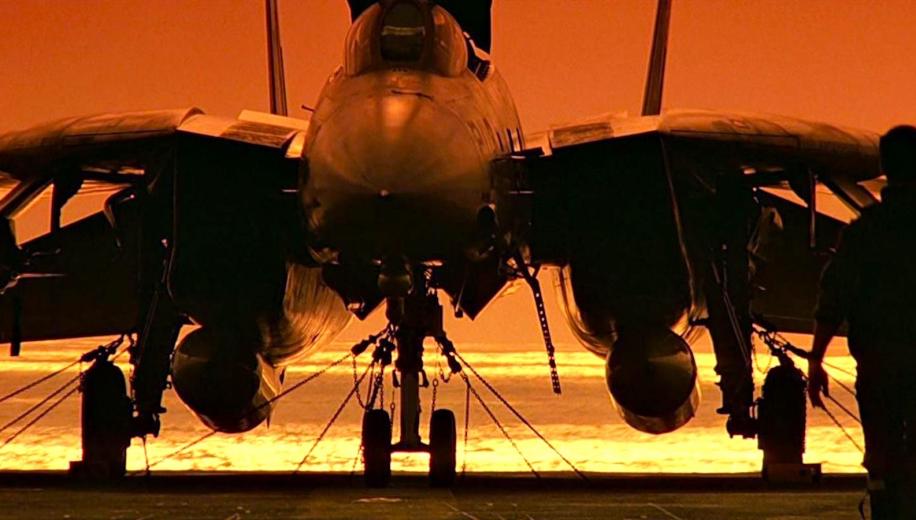 Right from the opening signature theme and stunning real footage of F-14s taking off and landing on an aircraft carrier, cast against a gorgeous trademark Tony Scott bronzed low sun backdrop, to the launch of Danger Zone as we are introduced to Cruise's career-defining hotshot pilot Maverick, 1986's Top Gun - for all the faults you could possibly attempt to level at it - is some kind of strangely perfect 80's creation.

The angry boss who always chews everybody out; the (literal in this case) maverick top gun who doesn't play by the rules; the loyal partner who pays the price for the protagonist's cocksure attitude; the supposedly unimpressed love interest who has to be won over; the antagonistic rival you'll love to hate - these are staples of hundreds of films since, and if this kind of cheesy dialogue was used these days it would be utterly cliched, but back in 1986 is was pure gold, and these were the perfect ingredients for one of the most iconic movies in Hollywood history.

Watching it for the first time in 2020 will undoubtedly prove a challenge, it's so cheesy and cliched that modern (new) audiences would probably only be able to accept it as a parody, but, back in the day, this was the best of the best when it came to big screen blockbuster action dramas. Of course that term is only loosely applied given the comparatively paltry budget of just $15 million but, coupled with now-legendary participation of the military, they still managed to put together some of the best aerial fighter sequences (if not the best) ever captured, looking a hell of a lot more authentic than the few imitators that have attempted to take to the skies since, reliant on real footage instead of the now-ubiquitous CG to sell its spectacular setpieces.

Adding in that absolute classic 80s soundtrack bursting with memorable tracks, a slew of supporting roles for early familiar faces (E.R.'s Anthony Edwards, Heat's Val Kilmer, Agents of SHIELD's Adrian Pasdar and The Shawshank Redemption's Tim Robbins take to the skies, whilst the likes of Alien's Tom Skeritt, Total Recall's Michael Ironside and Back to the Future's James Tolkan bark orders from the ground, with Witness' Kelly McGillis and a young Meg Ryan making an impression as the two key women) and of course Cruise in the cockpit for one of his all-time greatest roles, and the Tony Scott / Don Simpson / Jerry Bruckheimer trio just at the start of a journey that would take them through the likes of Beverly Hills Cop II, Days of Thunder and Crimson Tide, and Top Gun remains a bona fide all-time classic.

Top Gun comes to US 4K Ultra HD Blu-ray just a couple of weeks before its likely identical UK counterpart, with an absolutely stunning native 4K presentation for this Ultra HD Blu-ray release.

It's a fabulously looking 4K presentation, up there with the best of the best

Top Gun is almost 35 years old, but 4K has given it a whole new lease of life, with the relatively low budget production thankfully shot with some not insignificant style by Scott, and also thankfully shot on film, which leaves plenty of sequences from the film looking basically almost as good as they would today. It gets off to a slightly grainy start, with the opening shot, and that gives you a taste of what some of the individual frames may look like, particularly given the lighting and limitations of the source footage, but the aerial footage - by and large - is absolutely astounding; a real revelation in 4K, and far far better than ever before.

Detail is excellent, revelling in the nuances of the faces of the frequently sweaty core cast, with a loving layer of texture to it leaving you with no concerns whatsoever that the underlying detail may have been scrubbed away - sure, this is a clean print, but it's got no signs of excessive DNR implementation, merely affording the image a gorgeous clean-but-textured look.

Of course, HDR and WCG make all the difference, doing the heavy lifting and boosting the vibrance with the added enhancement of Dolby Vision, leaving the stunning trademark Tony Scott style prevalent throughout, whether it be in the low sun opening sequence or the subsequent sun-kissed scenery, with the brown filter heavily - but stylishly - utilised, and the picture running a broader gamut of inky blacks to peak whites. It's a fabulous looking 4K presentation, up there with the best of the best, at least in terms of classic cinema released in the new format.

Update: Top Gun has now landed on 4K Ultra HD Blu-ray in the UK, day and date with Cruise's spiritual sequel, Days of Thunder, as well as Spielberg's Cruise-starring War of the Worlds. The UK 4K UHD release of Top Gun is identical to the US 4K disc, affording the same outstanding native 4K Dolby Vision enhanced presentation and Atmos audio, as well as extras. Now all fans have to wait for is the new 4K Steelbook edition (which has been delayed 6 months because they stupidly put an F-15 Eagle on the artwork rather than an F-14 Tomcat!).

Top Gun enjoys a fabulously immersive object-based 3D High Definition audio track in the form of Dolby Atmos, which - as with the video - stuns right from the opening beats which, for any fan, will draw you right in.

Stuns rights from the opening beats

Dialogue remains firmly prioritised throughout, rising above even the deafening sound of the aircraft, given clear and coherent presentation throughout, largely from across the frontal array, whilst effects enjoy the real aircraft footage and the sound of engines booming, catapults firing, brake hooks catching, and missiles exploding. It's hardly brimming with discrete object usage, but it's impressive nonetheless and never less than immersive, drawing you in with its bracing on-the-deck soundscape and hectic dogfights, and keenly supported by an iconic soundtrack whose tracks - and signature score - simply defines almost each and every scene in the movie. Outstanding.
﻿

The 4K disc itself enjoys the old Commentary and a few new extras which were clearly put together to tie in to the production of the sequel, whilst the accompanying Blu-ray ports over all the old stuff.

If you weren't already eagerly anticipating the sequel, after watching this film and these extras, you will be

The late Tony Scott headlines an archival Audio Commentary which also draws in the likes of Jerry Bruckheimer, as well as the co-writer, and a naval expert to boot, to give you some great background into the production. There's also a Making of Documentary, some short Featurettes, Music Videos, Storyboards and Trailers. If that wasn't enough, we also get a brief new Legacy of Top Gun Featurette, as well as a retrospective 5-part Documentary, all of which involves the likes of Top Gun: Maverick director Joseph Kosinski, Bruckheimer and of course Tom Cruise himself. If you weren't already eagerly anticipating the sequel, after watching this film and these extras, you will be.

The release is the best of the best, which is what the film deserves

Paramount's US 4K Blu-ray release of Top Gun ﻿beats the UK disc off the deck by a couple of weeks (now finally landing with an identical disc and the perfect companion piece in Days of Thunder 4K), delivering absolutely stunning native 4K video, complete with Dolby Vision enhancement, as well as a tremendous Dolby Atmos track and some nice new extras too. It's the best of the best, which is what the film deserves.