Turns out future soldiers are a lot like today's soldiers 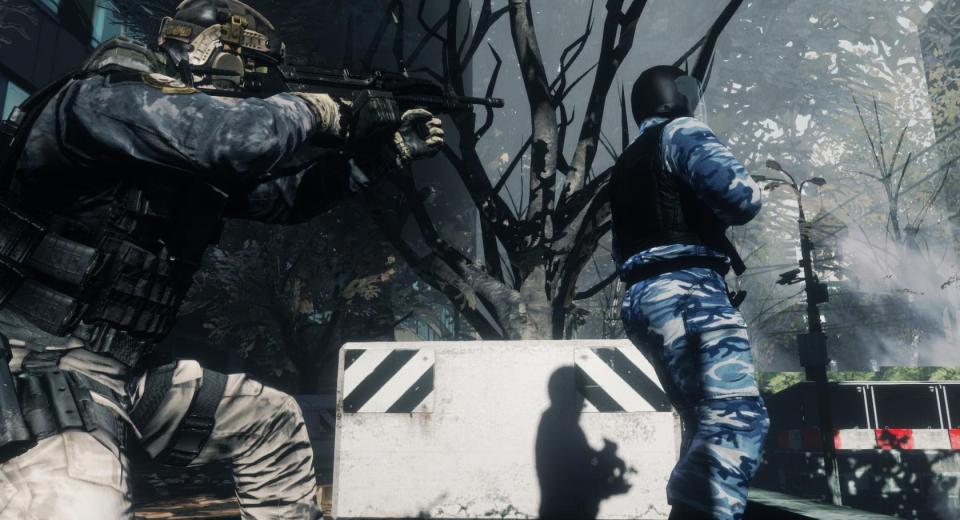 Back in 2008 when Ubisoft paid an undisclosed sum for exclusive use of the Tom Clancy name it seemed a strange investment. Even back then the Tom Clancy brand had lost much of its kudos; with ghost writers writing many of the movie scripts and novels that bore the brand. It makes more sense when placed in context of Ubisoft purchasing Red Storm Entertainment back in 2000. The studio co founded by Mr Clancy himself and responsible for producing the Rainbow Six series based on the novel of the same name.

So with this game we get a title from a developer who has been consolidated into the Ubisoft machine; which is based on the work of but not written by Tom Clancy, and has now subsequently been rebooted and subtitled into Tom Clancy's Ghost Recon: Future Soldier. They don't waste any time wiping the slate clean with the old ghost team "Predator" from the Warfighter games (GRAW) meeting an untimely end at the hands of a dirty bomb in Nicaragua. Leaving new ghost team "Hunter" to pick up the pieces and track down those responsible. The trail of clues lead the team around the globe with the majority of the exposition taking place during loading while some character interactions take place in the occasional cut scene.

Intel for the next mission is presented in the usual Google Earth view with text; images and video inter spliced with mission briefing audio. While the title promises futuristic technology, that future isn't too far away as most of the weapons are the standard firearms and grenades of old. Where the future comes in is mainly in the new camouflage mechanic. When crouched active camouflage will envelope you making you much harder to see at more than short distances. You also have sensor grenades which can pinpoint enemy postions within a certain radius and a UAV drone which can be remotely controlled both on land and in the air allowing you to mark targets for your team. The only other component of the futuristic theme is the inclusion of an augmented reality view which surrounds weapons and highlights objectives in the environment and provides you with additional information stretched across the sky in case you forget where you're going or what country you are in. The combat itself is a solid third person shooter, the stealth tools provided should tell you this isn't a game in which you "run and gun" but when the alarms are tripped and the bullets start to fly you'll be right at home with the familiar cover based gameplay. As a last resort going "loud" can be an effective move to have in your back pocket if the stealth gameplay gets frustrating and you want to move onto the next plot point but to get the most out of the experience caution and patience are the order of the day.

You are not required to micro manage your team's movements, they will move through the environment independently, the new tool in the box is the "Sync Shot" which allows you to mark four targets which your team members will line up automatically; awaiting your order to take the shot. Combined with the remote drone view you can tackle many encounters safely behind cover as you move your team through groups of enemies as stealthily as possible.

The Sync Shot is a powerful tool, however as the game progresses and the number of enemies in each encounter increases it demands you assess enemy movements and try and take down targets without their colleagues noticing and raising the alarm. This is the most rewarding part of the experience; once you master the tools; moving through groups of enemies without firing a shot is quite satisfying. The issue is that there aren't many more tricks up Future Soldier's sleeve. There is much more emphasis on action than found in the GRAW titles with fewer missions requiring no alert for success. It became common for me to voluntarily stealth myself through a mission before being forced into alert status to trigger a fire fight for the end of a mission. Combat is broken up with some vehicle and turret sequences, most notably the Warhound mech which provides massive firepower and mobile cover. Also introduced is the well worn breach mechanic where the entire team breaches a room in slow motion killing all targets in the process. There are some sequences during which you are locked into the over the shoulder perspective; generally in action packed situations during the campaign where it momentarily puts you on rails whilst things go crazy around you. The cover mechanics have also been reworked allowing you to quickly move from cover to cover by vaulting objects and running to your next position.

None of these distractions are enough to hide the fact that Future Soldier is a well executed but pretty dry version of a tactical third person shooter, the story and characters are instantly forgettable, which turns a lengthy campaign into a chore

The best way to get through the campaign is with friends as the entire campaign can be played cooperatively via Xbox live. The online components are a large part of the Future Soldier package. Again there is nothing new to report however there is a very solid if standard implementation throughout. Guerilla mode is their version of a wave based coop which directs players through different objectives whilst throwing waves of increasing difficulty at your team.

Adversarial mode delivers the usual suite of online competitive modes, together with the rank and unlock with XP system we have come to expect. There are 3 classes you can customise dependant on your play style: Rifleman packs more armour, Scout retains the active camo from the single player and Engineer can use the super useful sensor grenades. Each class has access to certain weapon loadouts which can all be unlocked and customised using Gunsmith Gunsmith is the mode used to test and compare your weapon modifications; also accessible in single player it is a nice interface for breaking apart weapons into their components allowing for further customisation such as different triggers for alternative fire rates or muzzle attachments for suppressed capability. All of this can be controlled via Kinect if you so wish but it's not necessary. It's a nice mode for those who enjoy the inner workings of weaponry or if you just want another reason to justify your dusty Kinect.

The action based leanings of single player have also crossed over into the multiplayer, in contrast to the GRAW series which bred a tactical playstyle; Future Soldier tends towards firefight based combat. Tactical gameplay can still exist it just requires all players to work together and communicate rather than treating all game types like as a death match. You cant see me

Its clear that multiplayer is baked into the core of the Future Soldier experience; it requires a level of teamwork which is most successful when played with friends. The online modes are competent variations on the standard suite of expected cooperative and multiplayer modes. The single player is a lengthy campaign with some good tactical elements in the game play which fails to expand beyond its solid core mechanics and leans a little too much towards a well worn path of action based shooting. The story and characters bring little to the table which leaves the ability to bring together 4 players to tackle the campaign cooperatively essential for the best experience.

Those looking for the more tactical elements present in the previous incarnations should treat the name Ghost Recon with as much relevance as they do the name Tom Clancy as neither have had a significant effect on the content; which means that Tom Clancy's Ghost Recon: Future Soldier is about as predictable and uninspiring as its title.