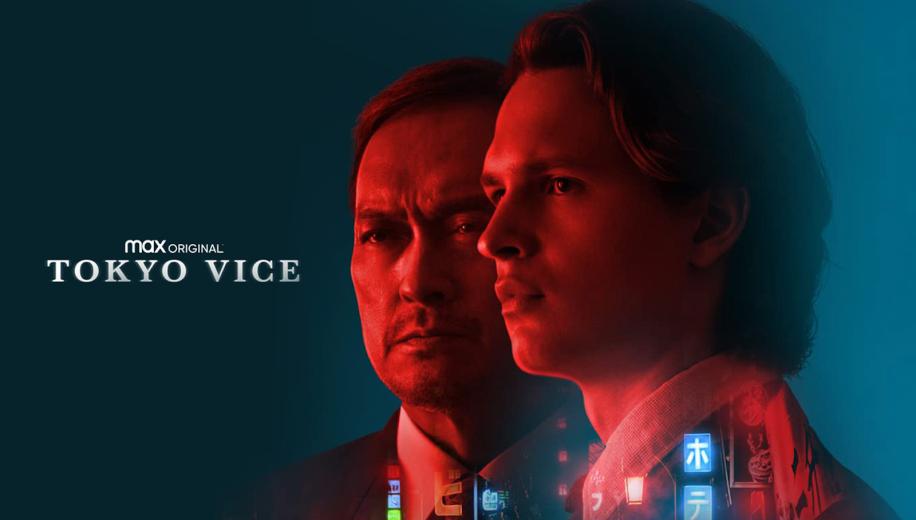 Michael Mann sets the tone for this slick crime drama, with echoes of The Insider meets Miami Vice, and a welcome authenticity partly thanks to Ansel Elgort's predominantly Japanese dialogue.

Mann's crafted a number of absolute masterpieces, with even those that fall short still landing in the category of being worthy gems - from Heat to Manhunter, Last of the Mohicans to Collateral (shockingly the only Michael Mann film to have reached 4K), Ali to The Insider, Miami Vice to Thief. Indeed, that's pretty-much the entire resume for his first 25 years, with a soft spot for the flawed The Keep too. But the last 15 years have been slow and less than impressive: Public Enemies failing to wow and then Blackhat being just the end of the damn line.

Seven long years later and he returns to direct the opening episode of this new series, Tokyo Vice - likely not coincidentally appropriate considering his early work on the 80's TV series Miami Vice - and, in doing so, show audiences a little bit of what they've been missing these last couple of decades. J.T. Rogers' crime drama, based on the memoir Tokyo Vice: An American Reporter on the Police Beat in Japan, is a compelling tale but it's Mann who lends it that initial, snappily paced, impetus and sets the stylish tone for everything to follow, leaving you longing not only for more from this particular endeavour, but more from the acclaimed auteur himself.

... it's Mann who lends it that initial, snappily paced, impetus and sets the stylish tone for everything to follow

Jake Adelstein is attempting the impossible - he's a six-and-a-half-foot Westerner who wants to be a reporter in Japan. Taking all of the exams, doing all of the studies, and integrating himself wholeheartedly into the culture and language - both spoken and written - his efforts are Olympian, but he's still a little misguided in his beliefs about reportage, at least insofar as is the situation in Tokyo. Tasked with a series of minor crime incidents, he struggles to tow the party line, always searching for the why - something that nobody else, not least his superiors, is in the least bit interested in. But then he gets involved in case with ties to the Yakuza...

Tokyo Vice came to HBO Max in the US, airing over the month of April. It lands in the UK in mid-May, airing on StarzPlay, which is great news for UK customers, and we'll be revisiting the review for a full season retrospective closer to that date. It's a gorgeous looking production, drenched in Tokyo highlights, and both guerrilla flavoured in its handheld camerawork and innately stylish with its slick locales.

Perhaps the biggest surprise about Tokyo Vice is that, whilst you may come to it looking for a Neo-noir thriller in the tradition of some of Michael Mann's classics, you soon find yourself drawn in by the simple premise of a Westerner making a life for themselves in Japan - a notion that doesn't seem like that big of a deal until you see it in action. To that end, Baby Driver's Ansel Elgort (recently acting and singing in West Side Story) has gone above and beyond for the part, going on a crash course to learn how to not only speak Japanese, but also converse in it and even improvise with it, lending a huge sense of authenticity to the role.

... leaves you yearning for more

The efforts leave this a Japanese dialogue-heavy piece, but adeptly accessible courtesy of Elgort, who navigates this world in a way that - whilst leaving most of us in awe - still gives us a Western insight into a very different culture. Surrounding him are a cadre of capable actors, from heavyweight Ken Watanabe (Inception, Batman Begins, Godzilla), who is expectedly tremendous, to Rinko Kikuchi (Pacific Rim) and Hideaki Itō (Takeshi Mike's Sukiyaki Western Django), with Legion's Rachel Keller also along for the ride. Tokyo Vice does a tremendous job bringing life to all of the tertiary characters that orbit Jake, from his co-workers to his cop connections to the nightclub girls and the Yakuza he gets embroiled with.

It's truly impressive that they've managed to craft a tale so innately compelling at a simple fish-out-of-water level, yet which also weaves in an underlying Yakuza clan turf war the likes of which you'd expect from a Takeshi Kitano opus. It's fabulously constructed, meticulously shot with a wonderful eye for style - undoubtedly keeping in mind the standards set by Mann in that opening episode - and it leaves you, even after three hefty episodes - yearning for more.

Very much the first of hopefully at least two seasons, Tokyo Vice wonderfully ties its disparate strands and well-drawn characters together across the course of its eight season one episodes, disappointing only in that it ends without reaching the flash-forward cold opening of episode one, a minor slight which merely emphasises the fact that you will be left wanting more.

Even without Mann's hand in the latter episodes, there's a glorious style to the piece, and the core quartet of players get to shine - a midseason attack proving painfully tense, Jake gets to practise more than just Japanese when his aikido training is put to the test, and complications on the Yakuza front leave the nightclub girls all in torturous situations. The last few episodes are great, but the actual finale doesn't feel anywhere near the end of a season, again tracking back to that old school vibe of 90's crime thriller shows which didn't necessarily get to a conclusion, and left plenty of strands for a further season. Whilst this could prove monumentally disappointing if we don't get any more, there's no reason to think we won't, and as it stands this is tremendous TV, and highly recommended.

Tokyo Vice was released 7th April 2022 in the US on HBO Max, and airs weekly in the UK following its 15th May 2022 bow on Starzplay.