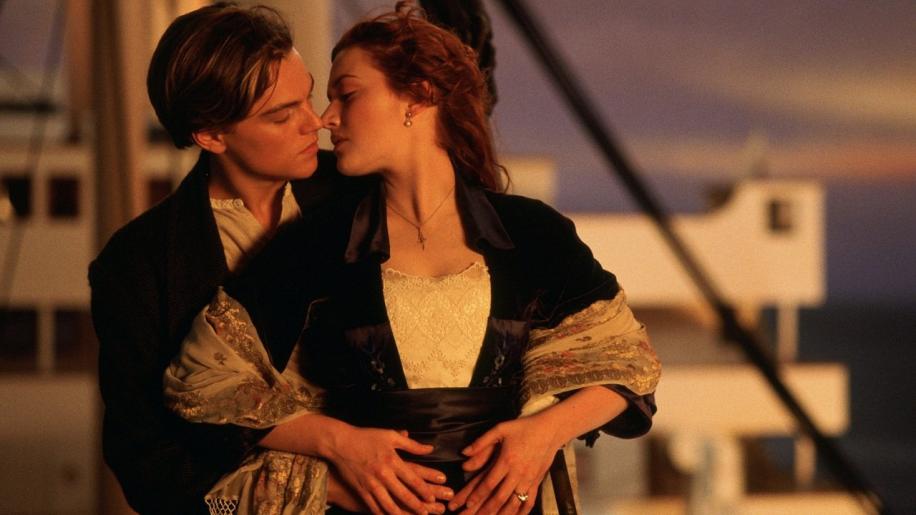 The image on this version of Titanic is truly fantastic and as good an image I have ever seen on a DVD. Firstly is the incredible level of detail that is present. Just check out the wrinkles on the present day Rose's face. Every single crease, line and pit is there to see with no softness or blurring whatsoever. Also Jack's face when he is drawing Rose is another example of the level of detail on offer as you can pick out individual hairs on his hairline with ease. But this detail never looks artificial or digitized but totally real and natural.

Next was the total lack of grain. This transfer is so clean, you could be forgiven for thinking you are watching High Def, which wouldn't be too far from the truth as this Anamorphic transfer was sourced from a High Definition master and goodness me does it show! Just watch the music video with Celine Dion which hasn't been given the loving treatment of the movie to see what I mean. The video looks soft, blurred and grain filled compared to the main feature. I viewed this movie on my projector with an 80 inch widescreen image and any imperfections would be obvious to spot when magnified to this size, but honestly, I could not find one artefact, not one hint of grain and barely anything that I could point out and say the image was lacking in with only one exception. Some brighter scenes show a hint of light bleaching and the contrast cannot pick out the subtle shades that should be visible. But that is it and that is only during maybe one or two scenes.

Colours though were spot on. The pastel shades of the sea and sky mixed perfectly with the vivid colours of the velvet furnishings within the ship and the scarlet red dress worn by Rose. Rose's pale complexion was easy to differentiate from Jack's more tanned skin tone and the evening sky's pinks and oranges look stunning. Blacks too are impressive. The night, starlit sky looks deep, pitch black with the bright stars jumping from this charcoal blanket with impressive ease. The detail retrieval during these darkest scenes is exemplary and even in almost complete darkness, you can still pick out all the information needed within the image. With the exception of digitally animated movies, my favourite movie with regards to image quality has been Gladiator. Titanic is very nearly as good as this, with the only possible criticism being the odd scene where as mentioned, due to the glare of the sunlight on deck, the contrast struggles to cope and some bleaching takes place. This is by no means common, but for that very reason, stands out when it occurs and stops me giving the image a perfect 10.

With the availability of both an English Dolby Digital 5.1 EX and more importantly, an English DTS 6.1 ES discreet soundtrack, you can sense you are in for something special even before you spin the disc and you would not be wrong. Every superlative you can think of can be applied to this soundtrack. Words such as 'dynamic', 'expansive', 'enveloping' and 'stunning' fill my mind when I think of Titanic.

The dynamic range is incredible and you will need a pretty robust system to appreciate, not to mention cope with the changes from quiet ambient moments to heart thumping action scenes and the bottomless pit of bass depth on offer. The surround effects are quite possibly the best I have heard and you are placed slap-bang in the middle of the action whether it be the wind blowing through your hair as you stand on the deck of Titanic or the panic that surrounds you as you struggle to get off the sinking boat. Whatever the scene, you feel a real part of what's unfolding within it.

The sound does not draw attention to itself like some overblown soundtracks do, rather it draws you deep into the movie and makes you a passenger on that boat. Quite simply a masterpiece of audio technology and almost certainly the best I have heard.

Now with 4 discs to get through, you would imagine days of special features would be present but I was slightly, only every so slightly disappointed with the amount on offer here. The movie itself is spread over the first two discs which is a little annoying because not only do you have to get up and fumble for the second disc in the dark, but you then have to reselect sound options, subtitles etc all over again. Not the end of the world, but a pain nonetheless. The reason for this though is understandable. The movie itself lasts 3 hours and six minutes which could in theory fit on one dual layered disc but then you have to add the 3 Audio Commentaries, the superb sound options including DTS 6.1 ES discrete and also the fantastic image quality all of which eat their way into the disc's precious space.

The majority of the special features are of the informative variety rather than the entertaining kind, with the possible exception of the Titanic Parodies which are taken from the American comedy show 'Saturday Night Live' and actually features Bill Paxton and James Cameron which was a nice surprise. Plus the animated short, 'Titanic in 30 Seconds' which features a cast of cartoon bunnies! But as mentioned, the bulk of the extras are educational, albeit very interesting.

We also have 29 deleted scenes which offer little to enhance the story but maybe 5 or 6 could be considered possibly worth including in the main feature. Maybe more interesting is the 9 minute alternate ending which although it doesn't really change the outcome of the movie (the ship still sinks!) does add a nice moment which I remember wishing was included when I saw Titanic for the very first time. It involves Bill Paxton's character, Brock Lovett, Rose and 'The Heart of the Ocean' and is undoubtedly one of the best additions to this DVD.

The 4 Audio Commentaries feature practically every possible angle you would want to approach the movie from, whether it be the Director, the actors, the people behind the scenes or the historians who know all the real facts about the ship, they are all here to give their words of wisdom. It was the first time I had ever heard a commentary by James Cameron so this was the one I was most looking forward to and I was not disappointed. The passion and love James has for this project is so obvious from this commentary that he at times sound like a child such is his enthusiasm. He has so much information to share that by the end, you believe you made the film with him!

This commentary was undoubtedly my favourite and after this, I would have to say they are all about the same. For purely entertainment value, the Cast commentary offers plenty of laughs as they share their anecdotes about bloopers, outtakes and terrible logistical problems with scenes, costumes and the like. Obviously, the Historians' commentary is very informative but unless you have a real passion for the ship itself, you may tire of this one fairly early.

There are many featurettes which look at all aspects of the making of Titanic and are all fascinating especially the one which looks at how they built a 90% scale model of the ship out in the desert and how they flooded the sets to simulate the ship sinking and how James demanded twice the water that was first used to flood the sets. Other featurettes look at the history of the story with interviews with actual survivors and gives you an insight into Titanic that you will not find elsewhere.

There are also 61 branched 'behind -the -scenes' footage clips which as the name suggests can be viewed during the movie where an icon prompts you to look a little closer at how a particular scene was created. I find this option a little pointless, it not only fragments the movie you are watching and ruins the continuity, but sometimes, you would rather not know whilst in the middle of the ship sinking that it is really only a hydraulic crane tilting a stage set in a box! Kind of kills the moment somewhat. But by all means watch the movie and then watch these pieces separately which in my opinion is much more satisfying.

No Titanic Special Edition would be complete without Celine Dion's hit song 'My Heart Will Go On', played to death, universally hated and an Oscar Winner which you just cannot help but sing along to. Go figure! Plus you have the smaller sections of Titanic trailers and TV Spots which are basically just more trailers and still galleries (photos).

Why this Region 2 version is split over 4 discs when the Region 1 manages to fit the same amount onto three is puzzling. Certainly the Region 2 has a higher bitrate for the movie than the Region 1 which may mean that they moved some extras onto the third or fourth disc to compensate. Or maybe they just thought the buying public would think they were getting more for their money. Either way, the third and fourth discs do appear to be a little thin on content even though, overall there are plenty of bonus features. It just gives the impression that the discs are only partly filled with material whereas the Region 1 discs would appear to be jammed packed.

The Titanic has always been a part of history that we have all known but we never really appreciated just how horrific it was to have been a passenger on that doomed ship. Titanic the movie brings that reality crashing down for all to see like never before. The story of Jack and Rose offered the viewer hope in a tale we knew was doomed and helped us relate to all the passengers which in turn gave the final act far greater emotional impact. The story has flaws and the relationship between the two leads was not explored enough but Titanic won 11 Academy Awards including Best Picture, it brought back to the silver screen Hollywood movie making the like of which we haven't seen in many years. The romantic epic is dead, long live Titanic.