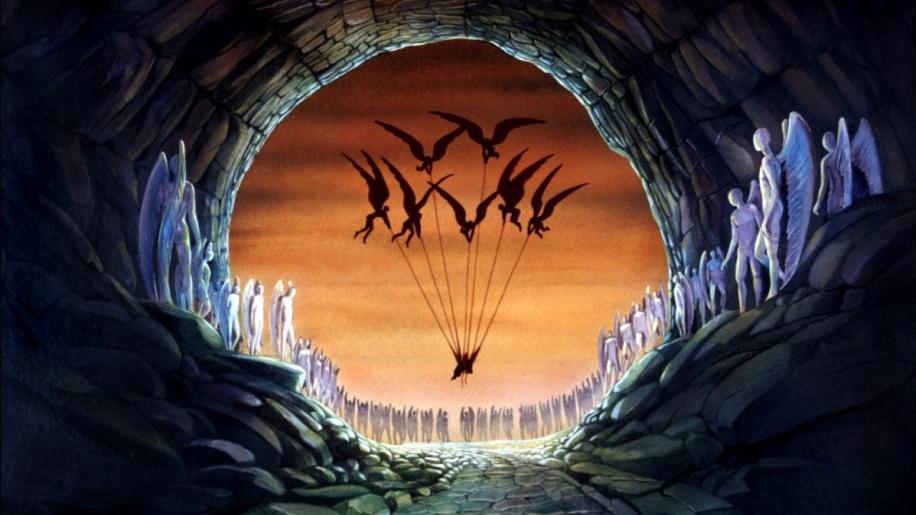 Les Maítres Du Temps (or Masters Of Time as I'll refer to it from now on...) is an animated film written in France but filmed in Hungary in 1982. When I was asked to review this by the team, the name rang a bell but for the life of me, I could not remember anything about it...

I started my research for the review and it all came flooding back.
The film tells the story of a young boy called Piel who is stranded on the planet Perdide after his father crashed his vehicle whilst trying to escape a swarm of hornets, a breed of human brain eating large insects that populate this particular sphere. His father, Claude, manages to get a distress signal out before he dies and it's picked up by the ship 22 Double Diamond, captained by Jaffar, which is transporting the Prince Mattor and his wife away from their home planet after they have made away with a load of treasure.

Claude gives Piel the microphone he used to make the transmission and this becomes his only friend on a strange and lonely planet.

Jaffar decides to attempt to rescue Piel, much to the annoyance of the Prince, who, via the microphone (christened Mike by Piel), tries to kill the young lad by getting him to drown himself in a lake. He's soon discovered, however, and thrown in the brig by Captain Jaffar.

Meanwhile, the young and vulnerable Piel is still stuck. Jaffar decides to use the power of the Blue Comet to reach Perdide quicker. It's here where we meet old space sailor Silbad, a cross between Uncle Albert from Only Fools And Horses and Popeye. It turns out that Silbad has a metal plate on his head, which comes from Hornets attempting to eat his brain some years before...
As soon as I started looking into this movie, I knew I had seen it before. The BBC has aired it twice - once in 1987 and once in 1991. However, they renamed it Time Masters and it was dubbed into English. Ray Brooks provided the voice of Jaffar. Remember him? He used to read the Mr Benn stories to us when we were kids. Once you have seen this film, it will stay with you for a very long time - even if it is just embedded at the back of the grey matter, as it was with me. It's a fascinating tale of one boys fight for survival on a harsh and dangerous planet and another mans race to save him before it's to late.

The animation here reminds me very much of the animated Star Trek series with bits of the 1960's Spider Man cartoons thrown in for good measure. The backgrounds are sheer works of art and, to me, are way ahead of their time. Some of the character animation is a little ropey, but never detracts from the story. Eureka have done a fantastic job of adding perfect English subtitles which means that the emotion in the characters voices shows through every time.

Coming your way via Eureka Video in October 2007, Les Maítres Du Temps is a welcome and worth addition to any movie lovers library. Very highly recommended.