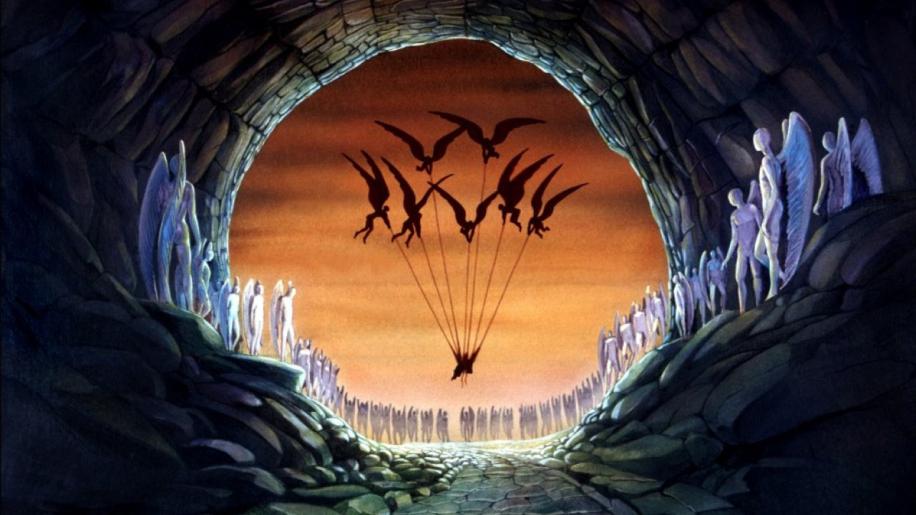 Filling the screen with its original theatrical ration of 1.85:1, the picture quality on this dual layered disc varies as the movie progresses.

I thought I was going to have a real problem from the start. The titles glowed and the blue colour bled all over the screen. I thought it may be my viewing device (a DLP screen) but when I played it back via my PC to capture some screen shots, the same thing happened...however, things steadily picked up from there.

There is the odd occasion where the picture, or parts of it anyway, seem to go out of focus. These incidents are few and far between - and to be honest, I was so engrossed in the movie, it really didn't bother me that much.

The original master has been restored by Eureka and is in very good condition. There are a couple of scratches and marks, but for it's age, it really isn't in bad nick. The colour palette is bright and there's enormous amounts of detail on show. Sometimes, the picture is that clean, it shows up the traits of the 2D animation us 40 somethings took for granted for so long. Occasionally, you can pick out the odd pin that is holding the cell down, and, if you look hard enough, sometimes you can actually see the edge of the cell itself against the background. This isn't a complaint on my half - rather a compliment for Eureka on the clean up job.

Blacks are solid throughout and the painted skin tones are spot on. Sometimes, the beauty of the backgrounds is a remarkable sight. Particularly on a big screen. I often found myself pausing the movie just to look. Excellent stuff.

All in all then, a worthy effort from the studio - with just the limitations of the time and a slightly dodgy source print letting the side down. Presented in its original French language in Dolby Digital 2.0, the soundtrack here is adequate to task.

I will be honest though, I would love to hear this track re-mixed with a fully dynamic Dolby Digital 5.1 mix. Some of the sounds in this movie are so over the top, my centre speaker sometimes strained to let them all out. There is no LFE to talk about and no surround effects either. Every sound is locked to the centre channel.,

It is, however, crisp and clear. The dialogue is spot on and the subtitles are fast and accurate.

There is one scene that stands out however...prepare to find out if your centre speaker is full range or not in the final scene. A spaceship lands and is firing guns from all cylinders. I discovered that my centre box is indeed full range as this scene filled the room with deep bass - with my pre-amp telling me there was no .1 channel.
Like the picture quality, the sound here is more than up to the task and will add toy your enjoyment of the feature. All we have here in the way of extras is the original theatrical trailer. It's a right state but does go to show what a good job has been done in restoring the main feature.

However, don't think I'm going to let the studio off that lightly...there is a 2 disc French version that is quite easy to get hold of. I'm not sure what extras are on that particular disc, but having an extra platter, you can be rest assured there's more than just a trailer. On the plus side, the French disc contains no English subtitles...but I'm still itching to find out more! This is the second Eureka title I have had the privilege to review. The good thing about this job is that, sometimes, you get to review the odd gem. The two Eureka titles fall into that category nicely. Even better, if I hadn't reviewed it, I wouldn't have given it a second glance if I saw it on the shelf and I would have missed out.

It's a cracking little story about a race to save a young boy on a strange and dangerous planet. There's some romance thrown in, a couple of catchy tunes that I couldn't get out of my head and the compulsory bad guy that you will hate...I did.
Backed up by a half decent picture and a soundtrack that will keep you hooked, Les Maítres Du Temps comes very highly recommended by me.
Though - would it be to much to ask to get you to translate those extras on the French discs please Eureka...?