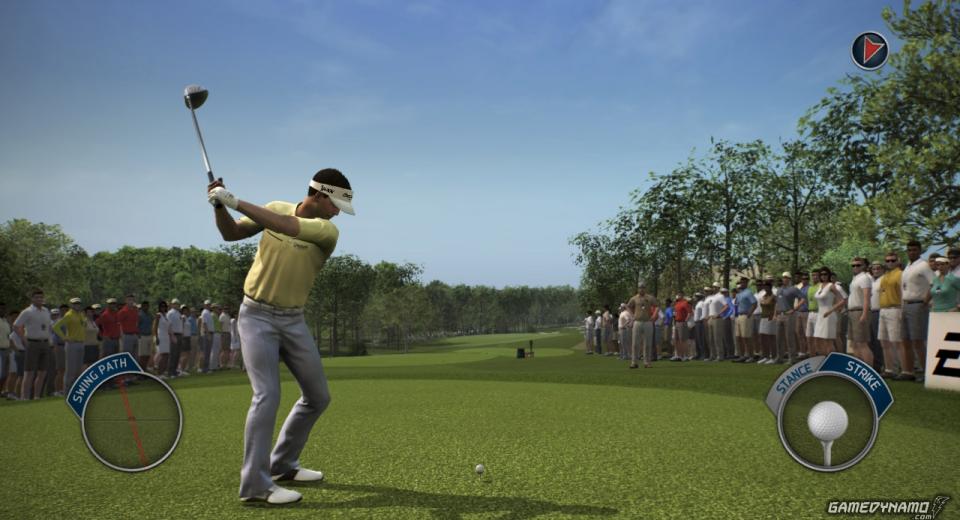 I don’t envy the developers of Tiger Woods. Perhaps more so than any other title in their sports stable, EA nailed their core golfing mechanics with the introduction of analogue swing back in 2003-2004, and whilst the underlying physics simulation and graphical prowess have undergone nips and tucks to keep up with next-generation sheen, there’s little practical difference to be found between Tiger 14 and Tiger 2005. Despite a few granular additions to the control scheme and fine-tuning of shot placement and swing types, in practice this still feels like the same game, whereas the difference between something like FIFA 07 and FIFA 13 is incredibly pronounced when playing them back-to-back.

If that sounds negative, it isn’t meant to be. By all accounts Tiger is still a magnificent simulation of its chosen sport, and dipping in and out of the series has allowed it to become a sporadic summer multiplayer event for a lot of people. As the focus has shifted towards content rather than mechanical upgrades, the more casual golf fans might appreciate the different ‘flavours’ that each iteration encapsulates; Woods’ own career took the main stage in 13, the Masters in 12, etc. Choose a flavour then, but stay as close the update curve as possible for continued online support.

For 14, EA has dipped into the archives to incorporate ‘Legends of the Majors’; a sort of interactive scrapbook of golfing history from 1873 onwards. It’s a concept they’ve delved into with a few releases in the past, but never to quite the depth that’s on offer here. Flicking through the timeline gives access to a vast number of mini-scenarios and challenges to master, with various major golfing eras broken into separate categories that can be jumped into and unlocked at will. There’s some real love for the game on show here, with photographs and quotes from the key players joining the requisite changes to appearance, equipment and presentation that each era dictates. Old-time challenges are framed with the lens of a sepia-tinged grainy camera and played out with the ridiculous and unwieldy clubs of the time, whilst every subsequent era showcases the gradual and subtle changes to the technological and presentational aspects of the sport.

It’s great fun, and as an amateur fan I have to say that Legends of the Majors mode suited my needs in a manner the modern-era tournament editions never quite manage to achieve. It’s easy to lose yourself in the bite-size challenges for hours at a time, and it’s given me an appreciation the iconic figures of the game and their career-defining moments. EA has perhaps missed a trick in not including much biographical detail on each of the players and events (Wikipedia handily filled in the rest), but other than that, Legends is thoroughly recommended for a few lazy Sunday afternoon playthroughs.

For returning players, 14’s mechanical tweaks come in the form of customisable swing profiles and ‘shot shaping’, which adds a layer of depth to the curve controls. When activated, slice and swing now have to be applied by tracing a straight diagonal path through the ball with the left thumbstick, mimicking the ‘shape’ of the swing arc and angled contact that a professional would use to get their desired flight path. It’s a pretty satisfying addition to Tiger’s basic suite of controls, although it does take a few rounds to adapt to the intricacies at first. Shot Shaping is also a part of a concerted drive towards crafting a defined swing style for each golfer, with created players now required to choose between power or control classes, and from one of several swing arcs that dictate the trajectory and length of shots along with the amount of accuracy and spin. In theory that should manufacture a whole swathe of created players with shortcomings and strengths, and taking to the various online modes reveals that to be at least partially true. Watching the ghostly trails of opponents’ shots revealed some highly varied trajectories in comparison to the almost laser-like precision of years past, and filtering out the swing assists makes for an even tougher and more interesting challenge, where five-shot leads can disappear in a crushing, sand-ridden instant.

Of course, this being modern EA, Tiger Woods 14 also offers players the ability to purchase and apply packs of stat-boosting ‘pins’ that’ll help counter any deficiencies in those swing styles. The microtransations are however (for the most part at least) not particularly necessary for enjoying the game or even that heavily promoted. Whilst it’s easy to become cynical about EA’s approach to monetising their sports games these days, the pins actually represent one of their better attempts at getting the balance right, and Tiger is perfectly playable at all levels without them. Indeed, I rarely met any players online that were actually using them at all, and the ability to filter them out completely in the various lobbies is welcome.

For long-term players, Tiger’s online modes are still robust and enjoyable, with Country Clubs now maxed out at 100 members and the ability to compete with over 20 players simultaneously. The Connected Tournaments feature steals directly from the SSX playbook in featuring time-limited competitions with attached leaderboards, allowing players to repeat the challenge as many times as they like before the window closes, posting their best cards to the scoreboard and earning in-game currency for their overall standing. It’s a fun addition, and one that’s made more entertaining by the inclusion of ball trails and chat with other players currently attempting the same challenge.

Tiger Woods PGA Tour 14 is still top of the golfing pile then, even though it’s effectively standing in a room and polishing trophies of its own making. EA is doing a decent job piling on new features and content while subtly tweaking the underlying simulation, and smaller additions such as Live Weather and the ability to play at night-time will be welcomed by long-standing fans. The course selection is vast and bolstered by a huge number of downloadable additions, and it’s difficult to know where to get started in the huge number of modes both offline and online.

As a returning player, I do occasionally miss the ridiculous nature of previous iterations (the indoor target range and daft local multiplayer modes sorely need a comeback), but 14’s "Legends of the Majors" challenges are more than compensation for those omissions. Whether it lasts one year or longer, Tiger 14 is a welcome addiction.