Thunder Force, get it? Cause, like, they've got "Thunder Thighs". Hilarious, right? 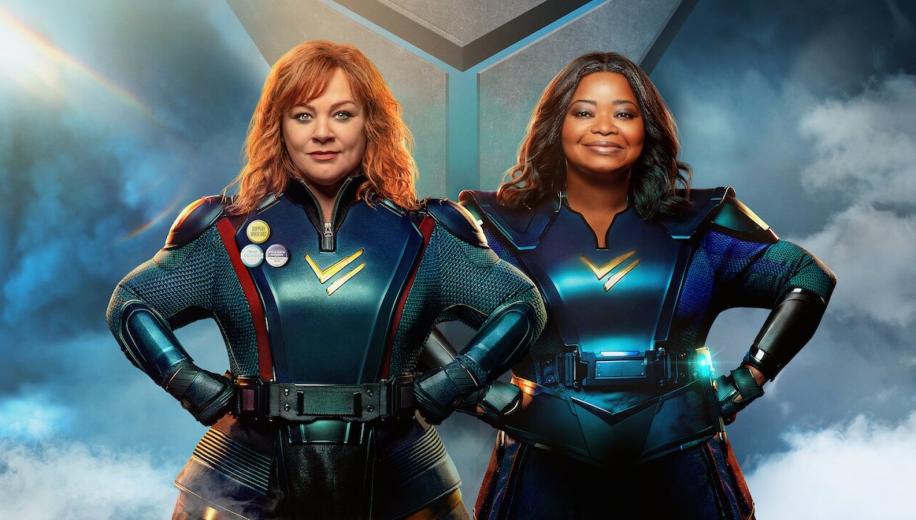 Writer/Director Ben Falcone's latest vehicle for real-life partner Melissa McCarthy unfortunately only proves that even fifth time's not the charm for this pair.

There's a good idea in here somewhere. Although arguably something like Shazam! better spoofed superheroes whilst being a decent superhero romp in its own right (c.f. Hancock), there is a tiny gap in the bloated genre which could have been filled by a suitably satirical look at unlikely superhero women who have to squeeze into their outfits to clean up the streets in a most unconventional way. Unfortunately, key to all of this - and more important than the pitch - is the script, and Thunder Force is just thunderously bland, barely raising a chuckle across its duration despite some painfully protracted attempts at improv riffing from McCarthy.

When looking down the barrel of her high school reunion, dock worker Lydia decides to reconnect with her estranged best friend Emily, a scientist who has spent her whole life looking for the super-serum that would enable her to combat the super-powered villains that plague the Earth and took the lives of her parents. Unfortunately Lydia ends up injected with the serum, becoming the unlikely guinea-pig who has to don the costume and take to the streets to fight crime - or explode if the formula isn't right.

Thunder Force comes to UK shores on Netflix in Dolby Vision with Dolby Atmos, looking quite the part. It's hardly a standout amongst Netflix's now-factory-made output, but it nonetheless enjoys a healthy budget and some decent effects which benefit from that popping DV edge. Black levels are deep and inky, and it's a very nice presentation, giving the film that slick, Netflix-made sheen which certainly leaves it looking far from cheap.

A largely inoffensive but also largely unfunny comedy offering from Netflix - which, itself, should be an offence

There is nothing inherently wrong with the concept here, and the flashback prologue which highlights both the rise and fall of the friendship of the lead characters when they were teens is perhaps both the most refreshingly on-point, and most heartfelt of the entire affair. It sets the stage well, despite a distinct lack of comedy, with McCarthy's character in particular enjoying a pleasant takedown of a schoolyard bully. Unfortunately, it's all downhill from there, with establishing shots of the present Lydia - working at the dock - feeling distinctly like outtakes, and her reunion with Emily barely raising a chuckle despite several valiant attempts. Perhaps it's partly at the hands of Octavia Spencer, who appears to be sleepwalking through the affair. Whilst it makes sense for her to play the straight foil to her boisterous former best friend, she plays it largely comatose.

Unfortunately, she also shares zero chemistry with McCarthy, which is a BIG problem. McCarthy, on the other hand, really gives it her all. She deserves credit for that, however misplaced her efforts, with some scenes and protracted improvisation riffs going on far too long - to the point of embarrassment - but McCarthy never less than prepared to go the extra mile. She needs better material, as a film like Spy shows. Thunder Force could have easily been the "Spy" of the superhero genre for her, with better writing and better teamwork. In Spy, McCarthy's best scenes were opposite none other than Jason Statham ("I drove a car. Off a freeway. On top of a train. While on fire. Not the car - *I* was on fire."), and here too she finds unlikely pairing, riffing well with Melissa Leo and, in particular, former partner in crime Jason Bateman (they were good together in Identity Thief), although her scenes with those only really show the flatlining of her interaction with Spencer.

Ironically, writer/director Ben Falcone himself also shared some of the best on-screen chemistry McCarthy has had, as early back as in their plane-set scenes together in Bridesmaids, so it's doubly frustrating that he can't seem to replicate the magic from behind the camera, with Thunder Force failing to live up to its pitch meeting promise, and proving a largely inoffensive but also largely unfunny comedy offering from Netflix - which, itself, should be an offence.

Thunder Force is available on Netflix, in Dolby Vision with Dolby Atmos, from 9th April 2021.
﻿