"One son who wanted the throne too much, and another who will not take it. Is this my legacy?" 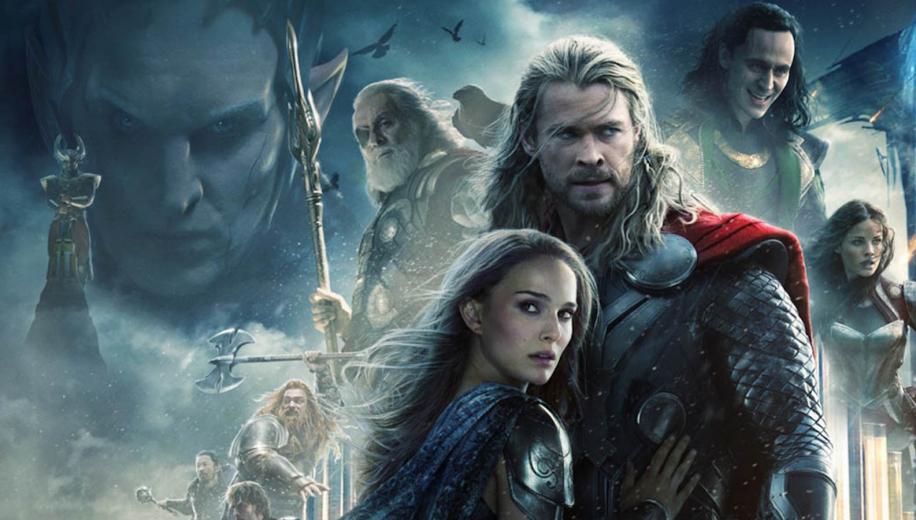 Rightly regarded as one of the weaker entries in the MCU, The Dark World still has plenty of off-world excitement even if it clearly underwent the same production woes as the similarly weak Iron Man 2.

The Dark World was reportedly a vastly different film before it hit post-production and reshoots. Originally conceived as a Branagh-helmed sequel, its fast-tracking would lead to the loss of the first movie's clearly more accomplished director and the notorious departure of his first replacement (Wonder Woman's Patty Jenkins), with a helmer more known for his TV work (Deadwood, Game of Thrones), Alan Taylor (Terminator: Genisys), brought on only to find that this was going to be very much a Marvel production-by-committee instalment, with very little of its own identity.

Along the way, original villain choice Mads Mikkelsen would get tied up doing Hannibal, co-star Portman would lose faith in the piece (around the time Jenkins left, along with her vision of the character arc for Portman's Jane), the London shoot would require intervention from Avengers' Joss Whedon, and the whole thing would once again rise and fall on some spectacular setpieces primarily based off-world, and an underlying Thor/Loki sub-plot which furthers their ongoing love/hate relationship.

Nevertheless, watched immediately after the relatively small-scale first movie, 2013's The Dark World clearly revels in its vastly bigger budget and scale, with a now fabulously realised Asgard, and some final act bewilderment that has more than a little Dr. Strange to its portal-jumping antics. It's actually an effective follow-up, particularly if you move past the unmemorable direction and score, ignore the weak heist antics and odd possession of Jane (which looks like a direct victim of the post-production re-jigging - as Jane is already dressed in her Asgardian armour when she has her first encounter with the Aether), and forgive the almost universally awful 'comedy' London scenes. The Odin/Loki/Thor arc is the strongest, particularly with the life of Rene Russo's Queen Frigga on the line, and the reluctant Thor/Loki team-up here provides some of the best moments across both of the first two Thor movies.

You can see the committee feel to the whole project, with Eccleston's villain just another unmemorable antagonist (easily overshadowed by Loki), but Hopkins, Russo, Elba and Hiddleston largely hold it all together on their committed performances alone (though Hemsworth still struggles with a bit of a thankless, lovably confident, but also stupidly arrogant role, which wasn't really expanded until Ragnarok), all making for a perfectly watchable Thor follow-up which may have just been treading water for the MCU, but is still enjoyable, particularly when watching it as part of Thor's own 'Trilogy'.

Thor: The Dark World comes to UK Ultra HD Blu-ray courtesy of Disney, marrying up to their identical US release. Unlike the first two Iron Man films, and the first Thor film, it was one of the first digitally-shot Marvel entries, and, whilst still ostensibly limited by a 2K Digital Intermediate, it nevertheless affords some noticeable improvements on this 4K upgrade.


A clear upgrade in 4K, and certainly a step up from Thor's 4K release

Iron Man 4K and Iron Man 2 4K both showed some (surprisingly skilful and tasteful) DNR application in an effort to help the shot-on-film source material fall in-line with the digital look that now pervades the MCU, but Thor 4K arguably took this too far, but, much like Iron Man 3 4K, there really should have been no such issues with Thor: The Dark World's 4K bow, as it was a digital production. Nonetheless, the sequel isn't devoid of softness, with those anamorphic lenses still at play to soften up the peripherals, and some smoothing that doesn't always do justice to the faces (apart from still revealing Hemsworth's makeup), particularly towards the start of the film. The London scenes fare much better, and actually, once you get past some of the early material, this is clearly a more striking effort which does display some excellent finer detail, evident not just on close-ups. Asgard looks vastly improved (now modelled on real islands, rather than just entirely CG) and the budgetary increase and commensurate upgrade in effects really show throughout.

HDR and WCG still make all the difference, whatever other reservations you might have, as candles pop across an Asgardian banquet scene, and the blood red of the Aether is afforded some malevolent vibrancy (the final red-dominated sequence pushes HDR to its limits, and looks much more impressive here than on the SDR Blu-ray), whilst Thor's lightning effects are more striking and the lavish trappings of Asgard have a richer golden shimmer. Black levels contend with the darker sequences admirably, allowing for a vast range from peak whites to inky blacks, but also new levels of evident shadow detail and, but for that sporadic near-waxy softness which still pops up here and there (although Captain America himself hardly escaped this, on the similar era Winter Soldier 4K release), it's still a clear upgrade in 4K, and certainly a step up from Thor's 4K release.

As with Thor's 4K release, The Dark World enjoys a strong audio upgrade on UHD 4K Blu-ray, afforded a High Definition 3D Object-based immersive audio mix in the form of Dolby Atmos. A slightly better balanced mix than the first film, whilst it unfortunately doesn't have the same rousing thematic score that Thor was afforded, it at least fills the gap with ground-shaking effects setpieces that give your sound system a good workout.

Dialogue remains well-prioritised throughout, delivered clearly and coherently, whilst the hardly inexperienced Bryan Tyler offers up one of his most generic cut-and-paste scores ever (although perhaps a part of that was due to the fact that it was a cut-and-paste movie in terms of post-production), afforded fine presence across the array and a little LFE input too in order to provide decent a background thrum.

The score gets some much bigger setpieces to play with this time round, and more developed powers for Thor too, who crashes to the ground with a Bifrost-like boom to his thunder, whilst the alien crafts impact planets with a house-shaking rumble that reminds you that there's some decent LFE at play here.

The accompanying Blu-ray has all the old extras - Commentary, Deleted Scenes, Gag Reel, Featurettes and One Shot, but there's nothing on the 4K disc

A watchable Thor follow-up which may have just been treading water for the MCU, but is still enjoyable, particularly when watching it as part of Thor's own 'Trilogy'

After impressive - but not flawless - work on both the Captain America Trilogy and the Iron Man Trilogy Disney finally put the first two Thor movies out on the 4K format, but The Dark World is certainly a step up over the problems with Thor 4K, though still far from perfect either, rendering a decent 4K upgrade and a solid Atmos upgrade too and leaving this an easy choice to pick up as part of a well-priced trilogy set to further complete your 4K collection of the MCU.