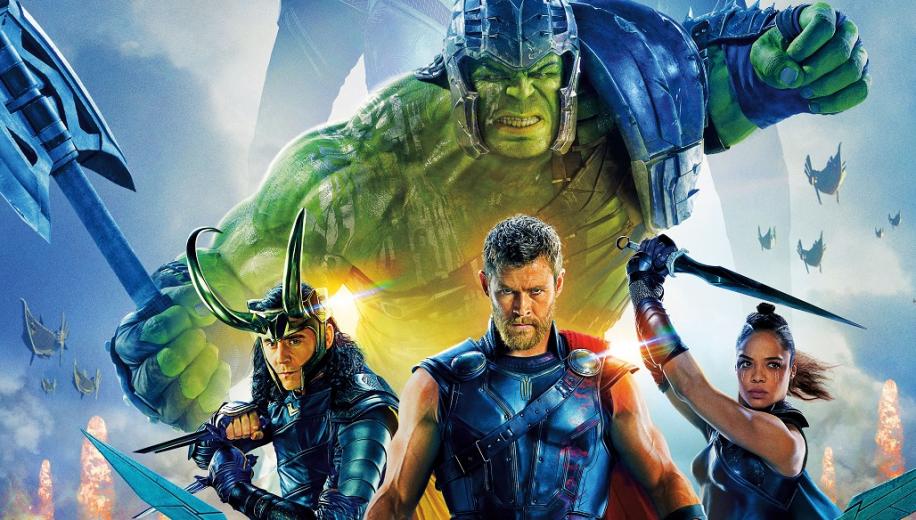 Thor: Ragnarok swallows up the seminal and tragic Planet Hulk story and spits out a fun and immensely funny Thor: Rock Star.

Having introduced us to a whole new world in Thor, Guardians expanded that to an all-new galaxy and Doctor Strange showed the potential that the MCU could offer, and now Ragnarok brings it all together into one unified whole in anticipation of Infinity War. With the out-of-this-world colour and funky soundtrack of a Guardians movie, the hard-hitting ground-pounding of a Hulk movie, and the epic swords and sandals scale of a Thor flick, Ragnarok delivers a perfectly-balanced blend of humour, action and impact, completing Thor's journey from within a much more extensive, expansive story of epic proportions. Where Civil War injected the epic comic arc into Cap's franchise, and Iron Man III used Extremis and The Mechanic to close out his trilogy, Thor: Ragnarok uses Planet Hulk, albeit channeling the tragic tale through the offbeat prism that is director Taika Watiti's style.
It's jarring for fans of Planet Hulk (who likely expected Hulk's version of Gladiator), but once you accept the tonal shift, the ride is a Marvel high in terms of pure fun. From the videogame visuals to the electronic 80s score that reminds us of Queen's Flash Gordon, to the bustling Fifth Element-esque universe, Rangarok is possibly the most let loose Marvel feature from the main four characters (arguably three, given that they don't have the rights to give us a proper Hulk trilogy), even if its humour does have some heart. Whilst we don't get the raging beast of Planet Hulk, the unlikely pairing of Hemsworth's Thor and Ruffalo's Hulk is - yet again - a great combination, with the two sharing wonderful chemistry, and ground-shaking conflict. With a tremendous villain in Cate Blanchett's Malificent-like Goddess of Death, and an all-star supporting cast, this is a great Marvel addition and easily the best Thor movie.

Although shot at significantly higher resolutions, the movie is unsurprisingly restricted - at least technically - by a 2K Digital Intermediate but, again unsurprisingly, this doesn't hold it back from looking pretty damn spectacular, and this is, in a large part, thanks to the implementation of WCG and HDR. As a result, on closer comparison with the accompanying 1080p/AVC-encoded High Definition Blu-ray - itself demo quality - the Ultra HD Blu-ray still manages to best it.

Detail is impressive, affording the colourful Fifth Element-esque planet some considerable degree of texturing, bringing the world to life, and lending the characters a richness of design that makes them just about as real as comic book entities could possibly look. Hulk's Ruffalo-driven design continues to improve and impress, whilst Korg's rock-based framework puts The Fantastic Four's Thing to shame. And Blanchett is absolutely stunning. The sci-fi fantasy environment and 80s throwback video game style are both ripe for HDR and WCG implementation, promoting vibrant, vivid primaries with a sheer pop that would give 3D a run for its money in terms of visual immersion, whilst black levels are deep and rich and deliver fabulous shadow detail, and make for a perfect backdrop to Thor's electric blue lightning powers, reminiscent of the dazzling effects of Electro from The Amazing Spider-Man 2 which also wowed on the format. It may not quite be Ultra HD Blu-ray perfection, but it's easy demo material, and looks excellent.

Thor: Ragnarok ground-pounds Sakaar with lossless immersive audio in the shape of a Dolby Atmos track founded upon an already reference Dolby TrueHD 7.1 core, affording the film an expansive, intricately designed soundscape which is almost as nuanced and detailed as the accompanying video.


A great soundtrack, but something's not quite right at the low end

Whilst dialogue remains well-prioritised across the frontal array, delivered with clarity and coherence throughout, the effects bring this world to life with rich atmospherics and healthy action beats, from the volcanic rock-breaking opening prologue to the world-breaking final act. The score is outstanding, a total throwback to electronic videogames, 80s electronica and, most obviously, Queen's Flash Gordon score (the director wanted Queen to do the score, but felt it wouldn't be the same without Mercury), giving the film as much colourful vibrance as the visual style.

Unfortunately, whilst a very good track, affording precision and immersion, engulfing you throughout in the wonderful world, Ragnarok isn't quite as powerful as you might have expected for a film that has Thor and Hulk cracking skulls (including each others). At the low end, in terms of resonance and depth, it simply doesn't deliver, leaving the track falling just shy of what could be argued to be demo quality, let alone reference. It's still a great track, but it's impossible not to think that something's not quite right, holding it back from the sheer excellence you would have expected.

Whilst, disappointingly, none of the extras are ported over to the Ultra HD Blu-ray disc itself, the accompanying Blu-ray is packed with great features that are well worth checking out. The director not only gives a short introduction to his feature, but also a great Audio Commentary, complete with all the humour you may have expected from the man behind one of the funniest Marvel mainstream entries.


The accompanying Blu-ray is packed with great extras

There are half a dozen Featurettes, focussing on Thor, Hela & Valkyrie, and Korg, as well as the world of Sakaar, providing an innovative breakdown of a couple of animated sequences, and setting the scene for this entry in the overall MCU, as well as looking at the evolution of the key figures in the upcoming Infinity War. The disc is rounded off by 6 minutes of Deleted and Extended Scenes, a Gag Reel and a Team Darryl comedy Short.

A great Marvel addition and easily the best Thor movie

The UK Ultra HD Blu-ray release of Thor: Ragnarok delivers excellent video and a strong selection of extra features, even if the audio track holds back a little bit, taking the sheen off an otherwise spectacular release.