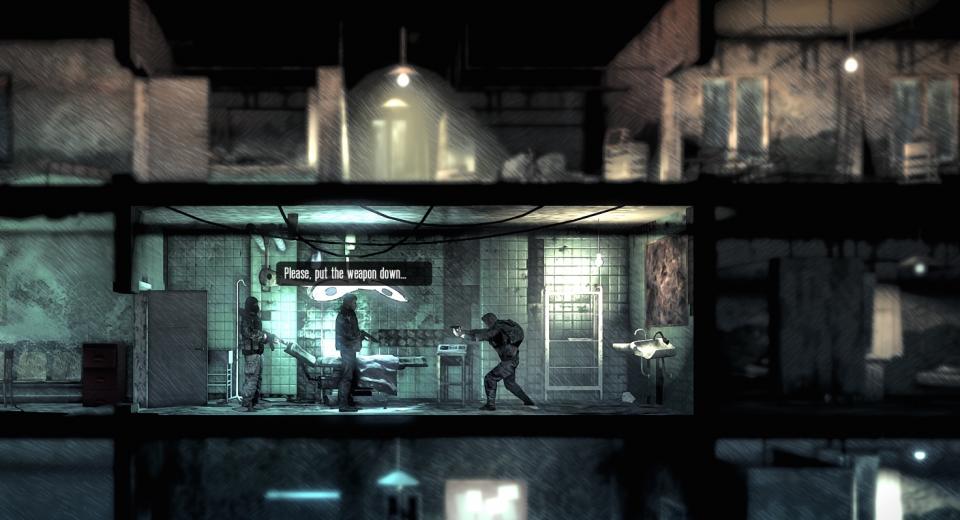 War in the video game industry is a concept we’re all familiar with.

Overwhelmingly, we’re plopped into the boots of a soldier, representing the ideals and motivations of his or her country. Your character is almost always heroic, wields a weapon like a professional and is unfailingly the good guy. Your standard hero’s actions are normally justified as completely necessary given the situation and that collateral damage along the way is forgotten about once you move on.

This War of Mine steps back from the soldiers on the front line, and instead lays the focus on the devastation left behind during a military campaign. That collateral damage is now your home, the source of all your resources and, of course, your own personal warzone.


Set in the fictional country of Graznavia, in the city of Pogoren you’re given a random assortment of 3-4 survivors, and from the moment go it’s your responsibility to keep them alive. They need food, tools, building materials, weapons and a lot more. If you ever played the old Flash game The Last Stand, the premise is somewhat similar. You have a period of downtime during the day and an action period at night.

During the day you’re able to rest, feed and entertain your party as well as upgrade, repair and explore the house you’ve found shelter in. The night signals a break in the hostilities, and as such it’s safe to let one member of your crew go out in search of supplies. Those supplies could be abandoned or guarded, and the level of resistance you’re likely to meet varies on the building type and the loot inside. The game itself is 2-and-a-half-D in presentation, and as such buildings will often span underground or through a large number of floors. Survival is the name of the game, but it also feels like a rogue-lite without the procedural generation. There’s permadeath, your starting party is completely randomised, as are the areas initially open and eventually revealed to you.

It’s all very indie, and as such there’s a crafting system like Don’t Starve. There’s an emphasis on ‘replayability’ like FTL. The art style and presentation is reminiscent of Deadlight and there’s the base building and relationship management side, quite like State of Decay. If you’re thinking "this has all been done before" you’d be right, but where This War of Mine shines is in its narrative and setting.


Your home, the homes you explore and the people you encounter all feel like victims of something much larger than them. Your house has holes in the wall because of random shelling, as do everyone else’s homes throughout Pogoren. Every character you play as and meet is missing someone, either due to their death, disappearance or desire to fight in the civil war.

Through your exploration you’ll be introduced to the struggles of the people in a very effective and subtle way. Walking to a crossroads will present you with a sniper firing on everyone in his sights. Further down the road you see a man with a leg wound, another victim of the sniper. He asks you to run through the sniper fire in order to open the sewers, so he deliver the supplies to his son without the hassle of the sniper fire.

Upon doing this, you find the man’s son isn’t a child or a teenager, but a baby. The idea of looting this building for the food and medical supplies inside now seems like an even more evil thing to do, and the game never even hinted towards any moral dilemma. As far as the game is concerned, you did a good thing by helping the guy and that’s it. It’s up to you to decide to sunder that decision and rob him, or leave him and his son alone, sacrificing a night’s worth of salvaging. The game is awash with these subtleties, and it’s something you really come to appreciate more as the game progresses. Your slow descent into banditry, or not depending on your play style, is one you may not even notice, like I didn’t. At the end of my game, I was a menace to the people of Pogoren and I’d never even realised until I reflected on my actions. I took more than I needed, simply because I wanted to.

The lines between military, rebel, bandit and you become more and more blurred as the game goes on. There was a moment in my game where the news was constantly reporting a roaming group of bandits terrorising the city and that you should make sure your house is secure. I did all this, only to never be attacked once. I soon realised that my group were the bandits terrorising the already suffering populace, and I’d just never put the pieces together.


The game, being indie, obviously didn’t have the resources to make a blockbuster of a title, and as such there are some oversights that really let the experience down. Character interaction is unbelievably limited, so much so that the only time you can ever have your party talk to one another is when one member is severely depressed or broken. At these times, characters can bandage each other’s wounds, share their food or simply chat and ask them to not give up.

Because of this limited interaction, character development is confined to each character’s biography page. It’s here that their thoughts about theirs and other’s actions are displayed, as well as their background information. Things like their family, where they were when the war started, and what they want to do once this is all over are unlocked steadily through the game. It’s supposed to feel as though your characters are growing in depth in front of your eyes, but really a paragraph of text is being unlocked every week or so. I often thought of how the game would feel if these biography pages didn’t exist. The background information about characters could perhaps be revealed once you make them interact with each other. Currently, your party is stuck in a perpetual state of happiness with each other. You could go out and murder an elderly couple for no reason other than your own amusement and everyone would assume you did it for the ‘greater good’. Characters don’t show an active dislike for anyone inside of their own group, and it’s to the game’s detriment.

This lack of substantial interaction creates a strange puppet-show in your home, where no one in your group really feels like an actual person. Instead, the people you encounter while scavenging feel much more real, simply due to the way they interact with each other.


Where This War of Mine really suffers is in the combat sections of the game. Both melee and ranged combat is available to you, with the odd stealth execution thrown in there too. The problem is that combat simply boils down to clicking on the guy you want to kill a lot until either he’s dead or you are.

When your reticle turns orange you have a chance for a critical hit. During melee combat this is when you’re behind someone. During ranged combat it’s somewhat of a mystery when and why the reticle turns orange, but if you keep whacking the mouse you’ll get it eventually. Ranged combat also gives you the option to take cover, which just boils down to your character kind of kneeling near the object you clicked on and then taking a little less damage than usual. XCOM: Enemy Unknown, it isn’t.

The ulterior motive of This War of Mine, it seems, is to expose you to the horrors of war. Not in the sense of what soldiers do to other soldiers, but what happens to the forgotten majority in-between, the innocent civilians.

Releasing a game that tackles this narrative around the same time Call of Duty releases could be coincidental, it could not be. As gamers we revel in the death of other players on a daily basis. This War of Mine, like Kenneth Jarecke’s infamous ‘burnt man’ photograph or Stanley Cohen’s novel The Naked and The Dead, wants to expose a dissenting narrative in an industry inundated with echoes.

For the most part it’s done well, but the game is too much of a video game to hit home. It’s a strange thing to say, but if you played Spec Ops: The Line you may understand my point a little clearer. The narrative and its message is a strong, well thought-out one, but the mechanical side of the game lets it down. Instead of feeling like you’re a living member of this world, you feel like you’re a video game protagonist in a living, breathing world. It’s like your characters just don’t fit in.

This War of Mine, for want of a better metaphor, is like a swimming pool that’s deep in some areas and shallow in others. You might be able to swim freely and appreciate the experience in the deep sections, but you’ll soon stub your toes in the shallow parts. After repeating that process a couple of times you’ll have no desire to do it anymore, and once you’ve swam the length of the pool there’s not much motivation to get back in.