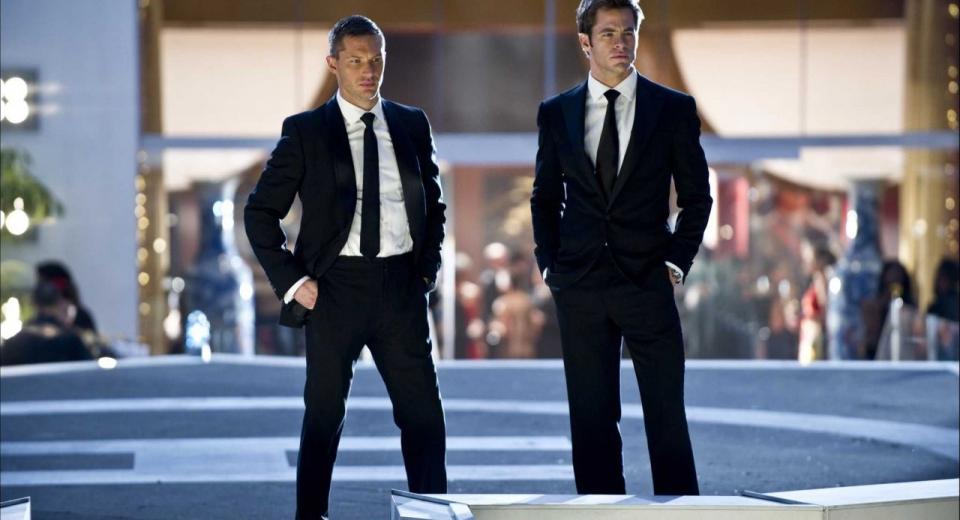 This Means War hits the UK with a Region Free Blu-ray that offers up a 1080p/AVC High Definition video presentation of the movie in its original theatrical aspect ratio of 2.4:1 widescreen. Surprisingly, considering that it’s supposed to be a flashy, stylish, reasonably big budget flick, detail is rather lacklustre, with only the close-ups offering up a satisfying level of clarity, and almost all of the mid-to-long shots betraying the film’s grainy Super 35mm cinematography, and becoming swamped by a supposedly ‘stylish’ out of focus haze that leaves almost all of the backgrounds little more than painter’s smudges (perhaps in an effort to mask the frequent green-screen usage). It’s not an unpleasant image – far from it – but it’s also a strangely unsatisfying one, coming with no digital defects; no edge enhancement; and no DNR, but also failing to provide that utter clarity that you might have expected for the piece. J. J. Abrams also favours 35mm, but perhaps not with this kind of film stock, and certainly not with these kinds of results.

The colour scheme further draws your attention – and, again, in the wrong way. It’s way too orange, with skin tones that feel too bronzed to ever even approach natural, and painfully over-saturated eye colours (what’s with the two male leads having the kind of penetrating blue eyes that you’d more likely find in the power core of the Enterprise?!). Funnily enough – much like the film itself – despite these issues, the presentation for This Means War still leaves it never less than eminently watchable, and, at times, even quite suited to the style-over-substance material therein. It may be a long way off the reference quality rendition that fans would have hoped for – and expected – but it also won’t spoil your fun (if you’re even having any, that is). The accompanying DTS-HD Master Audio 5.1 track is much more easy to compliment, a suitably boisterous, but also surprisingly attentive aural offering that is capable of flipping from action-overload sound-design to charming background atmosphere in a heartbeat. Right from the get-go the former is established, with the action opening boasting the whipping of helicopter blades as a backdrop to countless bullets which whizz out in every direction imaginable. Surround usage is excellent, with often pinpoint precision established across the array. Dialogue also never gets swamped by the rest of the track – whether effects or score – and has keen prioritisation across the fronts and centre speakers. The score is utterly forgettable, but at least provides the channels with an almost-constant feed of material to disseminate across the runtime. The LFE usage is fairly prominent too, and provides both a hearty accompaniment to the more prolonged background noises and music, as well as thundering through the sparks of action. Overall, this is reference quality through and through, and just shy of a perfect 10. If you’re one of the few that enjoyed the movie, then this is actually quite a nice set of extras. The Commentary is refreshingly honest, and the rest of the extras basically amount to over half an hour of alternate footage, which can only be a plus point for fans of the film.

Aside from providing an optional commentary for almost all of the rest of the extra features, director McG takes us through the entire extended cut, spending a fair amount of time self-back-patting about what he thought worked in the movie but also – rather refreshingly – being quite honest about what went wrong, and what didn’t work. It’s nothing groundbreaking, but it was a pleasant surprise to hear the guy be open to the fact that the production was fairly flawed, even if he still, at the end of the day, things it was a hit success.

This 4 minute extra plays like an epilogue, with Witherspoon’s Lauren going to Vegas for a bachelorette party, only to be spied on by Pine’s FDR. Unfortunately that loudmouth non-actor Chelsea Handler dominates the proceedings and only detracts from any potential worth in this addition.

Presented with optional Commentary by McG we get a half a dozen extra scenes – totalling 16 minutes of footage – that offer up nice character beats, light humour and a couple of interesting ideas (including the scene where Hardy’s Tuck recruits a number of Pine’s character’s ex-girlfriends so that he can ruin one of FDR’s dates), but, ultimately, there’s nothing here that would have saved the movie, just more of the same. Still, it’s amazing to see just how much was taken out.

With three alternate endings, running at 7 minutes in total, it’s clear that the filmmakers didn’t want to put their eggs in any one basket, and shot the ending three different ways (including the one on the theatrical cut, they are basically all of the permutations of who ends up with who out of the trio), to see how test audiences responded to each variation. It’s shocking really – if the filmmakers are that uncertain about how to play things, then how are audiences supposed to engage with their film. After all, you can’t just change the ending any which way and then attempt to tell people that you’ve crafted an entire movie with an ending in mind – the fact that it could have played out any one of three ways only goes to show how flimsy the build-up was. Funnily enough, on the optional audio commentary, even McG admits he would have preferred to have gone with a different ending – the funniest ending that would have actually left the movie on a reasonably high note.

Slightly more interesting is the longer added segment which is included here and which could have easily played out before any one of the endings (including the one we see in the Theatrical Cut) – it’s a few minutes’ long and features some much-needed extra action. Nothing special, but worth a watch.

Although it’s just shown using pre-visualisation CG, this is quite a nifty addition, clocking in at 9 minutes and basically presenting an almost entirely new opening segment, which would have taken place at the Burj (made famous by Mission: Impossible – Ghost Protocol). Featuring a selection of different CG clips, in various stages of completion, although there’s no live-action footage, and the clips look like they were done on a Playstation One, it’s still worth checking out. I’m guessing the budget prevented them shooting it this way; either that or they didn’t want to follow so closely in Cruise’s spectacular footsteps.

We also get a 4 minute Gag Reel which shows the cast having a laugh on set. Clearly at our expense.

The disc is rounded off by a number of Previews and the original Theatrical Trailer. There are plenty of good directors whose films are simply not bankable enough – and not PG-13 enough – for big Studios to back them. There are also plenty of bad directors whose films earn so much at the Box Office that they are untouched by criticism, no matter how universal it may be. McG follows the path of the latter, with a ‘Michael Bay’ approach to filmmaking, and – sooner or later – he is going to come unstuck. This Means War may not be the nail in his coffin, but it really should be, a remarkably mediocre offering that purports to be a romantic action-comedy, and yet has no romance, no chemistry, no decent humour and very little competent action. Wasting the talents of a trio of fairly prominent stars, it’s disappointing on all counts, and its Extended Edition form is even worse, so don’t be fooled into thinking that somehow it may have been saved by a longer cut.

On Region Free UK Blu-ray we get surprisingly average video, but excellent audio, as well as a fairly decent selection of extras which should please the one or two fans out there. If you’re one of them, then this is a solid purchase to add to your collection of McG movies, but otherwise this isn’t worth anything more than a minute’s consideration, and probably isn’t even worth a rental, unless you’re pretty bored.