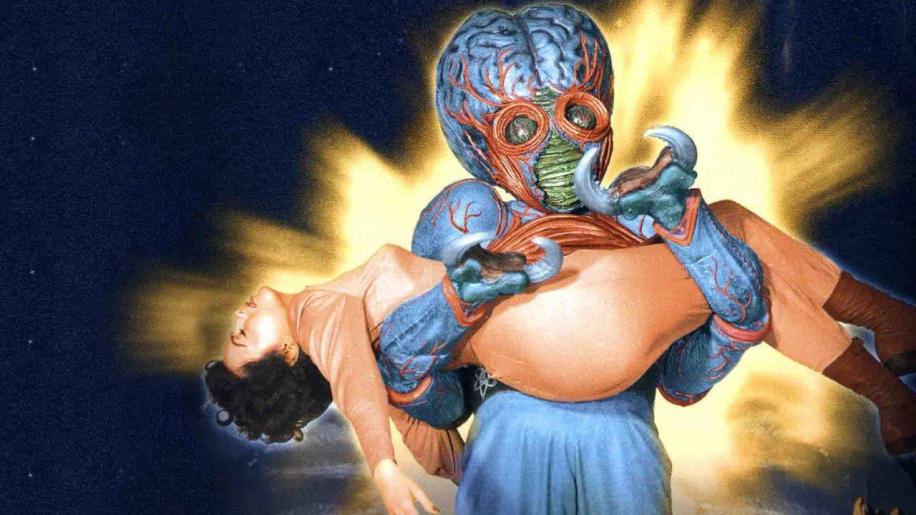 Apparently the original release of This Island Earth was plagued with problems and suffered, cruelly for such a flamboyantly colourful movie, from a very washed-out print. Well, that certainly isn't the case here. The new edition boasts bright, bold colours that buff up every laser beam, every explosion and all the garish hues of the planet Metaluna to a cartoonic gleam. I like the green tint to a lot of the flames, such as when doomed Earth scientist Carlson's car gets fried. There is, however, one sequence when our heroes meet the Monitor and everyone's face and hands take on a very unhealthy purple sheen. I'm presuming that this is on purpose - the light given off from the Monitor's cell-structure-reminiscent control array seems to illuminate the room this colour - but it still doesn't look quite right, and caused me to replay the scene and have a closer inspection. Yep, it's meant to be this way. My old VHS copy revealed the same effect but, and I think it's worth mentioning, to a very much lesser degree.

The full frame 1.33:1 image, whilst nice and stable, has heaps of damage of the small speckle, dot and hairline flicker variety. I must stress, though, that none of it distracts to any level of annoyance since, with a film of this vintage, this type of thing is par for the course. Grain is evident but really isn't a problem, either. And nor is edge enhancement which is really only apparent when you are looking for it in the first place. But there is a considerable level of shimmer on intricate patterns, such as some furnishings and Meacham's suits that can irritate.

Detail is actually very good and makes for a picture that is deep and visually arresting. The space scenes look good, with the approach to Metaluna being quite well rendered. The meteor-blistered and war-ravaged surface of the planet shows up a lot of interesting detail as Exeter's ship glides over it. But the problem with the clarity of the new picture is that it lessens the effect of the matte painting cityscapes behind the characters as they disembark from the ship, showing them up for what they really are. And they are considerably less convincing or atmospheric than those gracing the wonderful Forbidden Planet. Still, This Island Earth looks far better and crisper and more colourful than I had expected. This Island Earth comes with a DD 2-channel mono and I'm pleased to report that it sounds just fine - very limited, obviously ... but fine, all the same. The explosions and the shriek of laser beams are punchy and clear. The thoroughly unmemorable score comes across well, dominating several scenes in the style of the era with its brazen and warbly highs and lows, and the dialogue is never less than sharp and crisp. In fact, in the case of Rex Reed, you may have to bite your lip and hold your laughter in check, so loud, deep and overly-assertive does it come across.

But, overall, this is a very serviceable track. All you get is the wildly gee-wow-in-your-faceTheatrical Trailer, which is as wacky and chock-full of massively over-baked adjectives and slam-bam slogans as you could wish for. No retrospective feature though, and no historical commentary. We don't even get a chapter rundown! Very poor. Well, I'm afraid This Island Earth can't gain the thumbs up from me because it is just plain awful. I can certainly understand how this juvenile pulp managed to garner such rave reviews upon its initial release, but I'm struggling to comprehend just why it still does. If you are looking for colourful, camp sci-fi frolics, then this cheerfully episodic hokum should do just fine. But, barring only a couple of scenes of imaginative fun, that giddy sense of wonder that accompanies so many fantastic films of the era just doesn't materialise.

The acting from Rex Reason and Jeff Morrow is effective enough, but the others are just either wooden (Faith Domergue) or hysterical (Douglas Spencer). The script is bitty and banal and the whole thing is really beaten down by a severe lack of ... well, incident, long-lasting spectacle or excitement. A great big let-down.