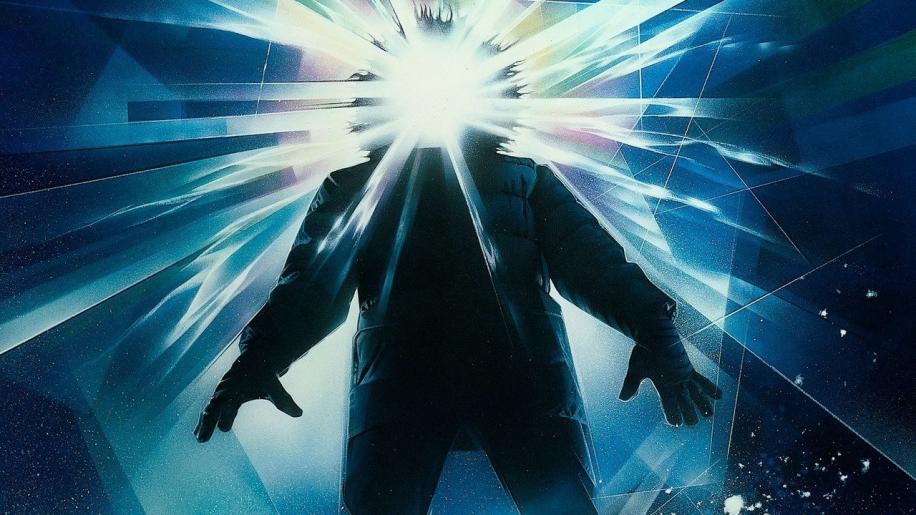 Despite the pack shot above, which is from the newer R1 release, this particular version is the non-anamorphic 2.35:1 release which came out a few years ago. Apologies for not obtaining the new version which is anamorphically enhanced. (I'm definitely going to order it soon - and I think you should, too.)

Well, the image may be stretched thinner than one of those gloopy strands popping out of Norris's neck, but it is practically crystal clear, full of detail and sensational colour, and possesses a richness and depth that does Carpenter's widescreen image a great service. Original print damage is virtually non-existent, save for some miniscule dots and the like that are only visible if you are looking for them. I'm very impressed with the way the transfer manages the immense plateaus of harsh white and the subsequent transitions to dark interiors, for example Copper and Mac stepping into the wrecked Norwegian camp. This vital quality is consistently maintained throughout. Just look at the long shots of the American camp nestled against the huge white backdrop - even the finite detail of the distant shacks, antennas and flags are well-delineated.

Black levels are tremendously strong and deep. Again, the scenes of the creepy Norwegian camp benefit considerably from this. But the shadow-play is convincing and atmospheric whenever called into play and the Generator Room finale is a veritable haunted house. Torchlight and the glow from the red flares are sharp and painterly, respectively. Edge enhancement is evident on some equipment and the markings on vehicles and some other edges, but is never distracting. But what is most memorable about the transfer is the sense of depth that gloriously captures Carpenter's skill for compositions that are breathtaking and full of visual information. An excellent transfer.

The Dolby Digital 5.1 makeover that The Thing has received is very atmospheric mix, indeed. Its impeccable steerage, use of ambience and strong delivery of Morricone's hypnotic score are splendidly realised from the start. The Norwegian helicopter rotors its way across your living room, the insistent heartbeat of the score pounds away and the gunfire and explosion of the introduction sound terrifically bombastic.

Dialogue is always sharp and clear, vividly delivered and supplied with plenty of directional use for the voices. The unearthly shriek of the Thing - the dog-creature's wail that rouses Macready, Bennings as he squats in the snow, and particularly the stretching belch as Norris mutates and the Blair-monster's final roar - fills the soundscape with eerie resonance. The flamethrowers sound great, too. Especially cool is the thick whump! whump! of Mac's flamethrower when it malfunctions. And listen out for the realistic rustle of Russell's leather flying jacket during the blood-test. In fact, everything sounds great. Don't get me wrong, though. The Thing was never a movie with a full wraparound sound-design, and what has been created here is hardly comparable with the latest blockbuster. But the atmosphere created with the aid of this respectful, and intelligently utilised, mix is magnified tenfold. The Antarctic winds really whistle with a weight and a presence, the ripping open of the floorboards in the generator room have a solid mass and the subtle things like footsteps, sizzling blood in Petri-dishes and the organic popping of Thing-tissue and the slopping of goo are reproduced with distinction. There does seem to be a curious excess of sound fx whenever Garry's revolver is brought into play - but this has always been present. Just why does it click so much? But get a load of that crazed Norwegian taking pot shots as he strides through the stunned Yanks - there's a great bullet zipping from front right to left in there.

There's a lot of stuff here - and it's all good. The Thing has really been blessed with quality extras that are informative, respectful and eminently fan-pleasing. The Commentary Track with good buddies John Carpenter and on-screen alter-ego Kurt Russell is a hoot. The two have a terrific time shooting the breeze, having a drink or four and reminiscing about the time they spent in the snow and ice. They had a good laugh on their track for Escape From New York but, in my opinion, this one is much better. Listen out for Kurt Russell when he recaps his attempts to take control of the helicopter for real, and especially when an exploding Thing makes a much bigger bang than he expected and almost blows him off his feet. Infectious fun.

It's worth pointing out that Ennio Morricone's stark and memorable score is available in its entirety, and in glorious 5.1, as a music-only track that plays over the awesome making of documentary entitled Terror Takes Shape. This amazing 83.49 minute feature is a real warts 'n' all retrospective that takes in the entire process of getting this classic film produced and brought to the screen. With copious participation from makers John Carpenter, Dean Cundey, Rob Bottin, Stan Winston, Bill Lancaster and cast members Kurt Russell, Joel Polis, Richard Masur and Charles Halloran, and others, it covers the arduous location work up in Stewart, British Columbia, the screenplay and casting, the fantastic special effects and matte work, the film's doomed reception upon release and its subsequent elevation to cult status. Broken down into eight chapters, with cool “Thing-inspired” titles, the best bits are undoubtedly those that recollect the fx. Rob Bottin is a delirious joy - totally off his trolley but full of wonderful stories of makeup disasters and successes (“Take 1 goes awry!”) and refreshingly frank and open about his landmark achievements. Stan (The Terminator) Winston gets a chance to talk about his “form following function” principle for the puppet-dogs and visual effects artist Albert Whitlock chronicles his early days with Hitchcock and his work here on the partially buried saucer. Richard Masur, who plays the gentle giant, Clarke, pays a nice little tribute to Jed, the wolf-dog, too. What niggles slightly is the relative lack of input from Carpenter and Russell - they seem content to let the others do most of the reminiscing. Then again, they've had their say on the chat-track. This is a wonderful documentary, written, directed and produced by Michael Matessino, that puts many others in the shade.

Next, we have a plethora of galleries that are simply sumptuous and exhaustive. All feature clear and well-written text rundowns to steer us through them. There is so much on offer here that it is difficult to know where to begin. But, we'll have a go, anyway.

Production Background Archive has photos, script-excerpts and a brief production diary. Cast Production Photos gives us a series of character stills. Production Art and Storyboard features original conceptual artwork and models for the alien from Dale Kuipers, and then some wild and wacky designs from Rob Bottin and comic book artist Mike Ploog. This also has a great storyboarded section set at the wrecked Norwegian camp. Location Design reveals the challenge that faced Production Designer, John Lloyd, in building the Antarctic base. There are lots of terrific images of the frozen hilltop and glacier used for the setting and, if you flick through these comprehensive stills, you will see the sets being built right before your very eyes.

Production Archive offers a selection of atmospheric stills from the principal photography and some of the crazy special fx. The Saucer and The Blairmonster both supply frame-by-frame images and text as well as full-motion test footage. The miniature sets and model work from Susan Turner are marvellously intricate - love that tiny detonator and plunger! You can also find in here the storyboards for Nauls' unseen demise. Neat stuff, folks.

Once again in Outtakes, we have a choice of frame-by-frame (featuring unused shock-stills from the Norwegian camp) and full-motion (which some cool dialogue snippets and re-workings and one full scene of Bennings chasing after a mysterious figure in the dog enclosure - presumably dropped for pacing reasons). Post Production gives us a look at the billboards, posters, book covers etc upon the film's theatrical release. And there's a tasty glimpse of Elvira hosting the premier. Production Notes is basically a text rundown of the things that we have learnt throughout the extras.

And, to round this excellent set of bonuses off, we get Filmographies for Kurt Russell and John Carpenter and the wonderful original Theatrical Trailer. This is a beauty - full and mystery and building to a tense crescendo with a booming soundtrack.

These extras show care, respect and an innate desire to do this monumental movie justice, and are fully deserving of top marks.

The Thing is a bone-fide cult classic. Much like its titular creature, the film gets into you, and slowly takes you over. Its themes of loss of identity and horrendous bodily infection are ever-prevalent and thought-provoking. Carpenter's strong direction is a meticulous and well-honed engine of suspense and his unique ensemble cast have created indelible characters. The Thing is much, much more than a just a sick-bag of disgusting fx - though they are obviously just as memorable - it is a convincing tour of distrust and paranoia in an era where those conditions exist on a global scale. It's great for Halloween, too. Snuggle up and geek-out whilst the Autumn winds try to emulate those down in Antarctica.

Universal's disc is literally everything a fan could wish for, and then some. The AV quality is fantastic - despite being non-anamorphic - and the R1 packaging is much better than the lousy image adorning the current R2 release, culled from the videogame. A perfect package if you opt for the newer R1 release.

One final thing. For further reading, have a look at Anne Billson's excellent study of the film for the BFI Guide.