Beware of anything with strings attached 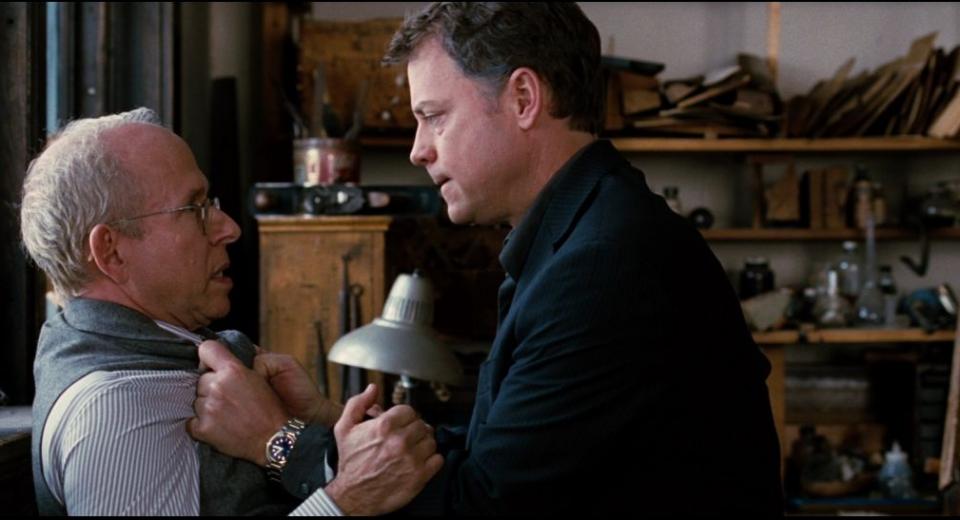 British cinematographer Dick Pope has preferred 35mm over digital and has done a fine job with it. The limitations of film – particularly the 2.00:1 contrast ratio are starkly revealed on current digital playback systems and the blacks have particularly suffered, looking extremely crushed on occasions, with most of the shadow detail disappearing into the gloom. Film grain is well controlled and lighting and framing is both very good, bearing in mind the budget of the movie.

The AVC-Mpeg transfer is excellent with no noticeable artefacts, but it could have been a little brighter to avoid some of the lack of black resolution, as turning the brightness control up from its calibrated reference setting reveals a few extra hidden details. The grimy, Mid-West winter comes across extremely well – you can almost feel the cold on occasions, while most of the other scenes are set in real locations, including the violin workshop, all of which contributes to the overall realism and believability of the settings.

The colour palette is understandably set towards the bluer end of the spectrum, but skin tones still look accurate. Filmed in Minnesota over the winter of 2010, you would be hard pressed to know it was not Wisconsin. Although the picture is not reference standard, nothing other than the black level stands out here as particularly wrong, so will not interrupt your viewing of the movie.

The DTS-HD MA 5.1 stream carries a fairly laid back, pleasant enough soundtrack, melding a few Caribbean beats in the opening scenes with a more conventional orchestral score. It is all fairly forgettable, but generally fits the movie well. Alex Wurman’s score was ditched from the movie in the re-edit demanded by the distributers and has not as yet re-surfaced, so we are unable to tell just what a difference this would have made to the movie.

Dialogue is well handled, if somewhat nailed to the centre channel, although the surrounds do get a work out, with both ambient and music appearing from time to time. Don’t expect too much in the way of big LFE moments, but again, the music track makes an occasional appearance, as do a couple of spot effects.

As with the picture, there is nothing here to detract from the movie, but there are far more dynamic and interesting soundtracks out there.

Unusually, the menu takes you straight to the extras at the end of the movie – a nice touch. All of the menu structure is equally well thought out, despite the lack of options a single movie and a couple of extras. Language support is extremely wide for such a limited release, with 11 audio streams and 27 subtitles available! More than many blockbuster releases.

Moving on to the extras, there are just two sections, an extended making of, running to just under 30 minutes and a selection of deleted scenes.

The Making of is interesting, as it applies to the original edit – The Convincer, and it is this name that many of the cast and crew refer to throughout the short. No explanation is given as to why a different film name is used, so a little bit of research is required to make sense of the short. The final segment of the Making of is from the Sundance Festival, with a poorly shot and edited Q&A session.

The deleted scenes give us a little clue as to what the original movie might have looked like, but you get the feeling the distributers were right, and the re-cut required.

A flawed movie in quite a few respects, but the various twists and turns make for fairly entertaining viewing. The main issue remains the amount of time it takes the story to get going. The establishment of the plot and characters is just too long and this slows the film to a crawl.

Technically, 35mm transfers can and quite often do look better than this. The main issue is the crushed blacks, with too many scenes almost vignetteing into gloom at the edges of the frame. The sound is fine, but nothing to blow your socks off and the extras are quite limited and ultimately quite confusing due to the fact they refer to the original name of the film.

All in all, this movie misses out on extracting as much from the story as was possible. It feels more like a stretched one hour TV movie than a full on cinematic release.