They Shall Not Grow Old Blu-ray Review 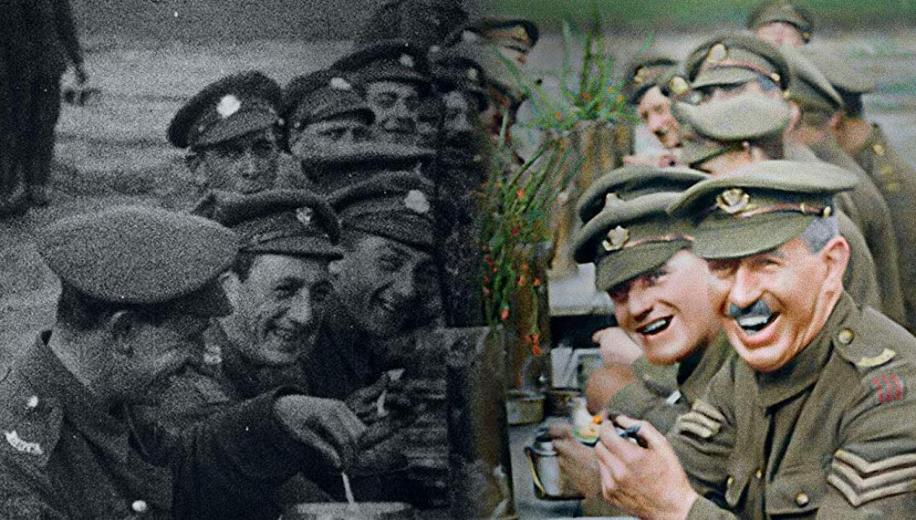 They Shall Not Grow Old Film Review

Peter 'The Lord of the Rings' Jackson works his visual magic on century-old footage for this unforgettable look at The Great War.

Commissioned and released to mark the centenary of the end of World War One, Peter Jackson's acclaimed production is a fabulous achievement, top trumping its way past any history books, documentaries, or big budget feature film adaptations with a wondrous use of modern technology and an almost constant narration from the people who were actually there.

Initially setting the scene with vintage footage of London, stills of the recruitment propaganda, and clips of the long 'training' period, just under half an hour into the piece Jackson waves his wand and the bite-sized archival footage expands out to the whole of your screen, complete with modern colourisation techniques, bringing the clips to life and drawing the hundred-year-old war all the way back into your living room.


It's honest and authentic, telling a story which no book could ever really teach you.

Sure, the technology isn't perfect - neither the colourisation nor the clean-up-and-expand process is anything more than an approximation of real colour footage, with some distinct softness throughout, making you feel as if you were watching through a slightly steamed-up window. Motion suffers from an artificial feel, particularly when soldiers are talking, and there's even a slight deadness around the eyes. You almost wonder whether the attempts to make it more relevant also risk making it too fake; too artificial.

No, this isn't like watching colour footage from the period, but that does not take away from what Jackson is attempting, and the effect the results still have. Despite its faults, it does make the long-distant war all the more modern and contemporary and relatable. This isn't just vintage silent footage from way back when; it's newly (and immaculately) dubbed and impressively restored video footage from the front line. All of a sudden, you're right there.

And whilst there's no conventional narrative, the narration takes you through the entire period, from recruitment to the trenches to the tanks and bombs, bringing camaraderie, brotherhood and even a little bit of humour in amidst the horrors. It's honest and authentic, like you wouldn't believe - and possibly even to a fault - telling a story which no book could ever really teach you, paying the greatest tribute imaginable to The Great War, and preserving it forever.

They Shall Not Grow Old Blu-ray Picture A leading example of the genuine power that modern film restoration can have upon preserving history.

They Shall Not Grow Old comes to UK Blu-ray courtesy of Warner, who afford it a 1080p/AVC-encoded High Definition video presentation framed in the feature's dominant aspect ratio of 1.78:1 widescreen (notwithstanding the fact that much of the earlier archival, and 'unrestored' footage appears letterboxed in the centre of the screen.

It's impossible to really critically evaluate the footage here. It's possibly the most stunning large-scale effort to restore vintage footage, and, sure, the results are still mixed - with (as is covered in the film review segment) some sequences having uncanny valley-like effects on facial movements and speech, whilst others, in particular shots which involve slightly less movement (or reduced down to slow-motion), looking absolutely like genuine colour footage. The colours too have come a long way from the early days of colourising films, with a much more life-like implementation here that sometimes even comes close to being convincing, and is certainly much less distracting than any previous attempts.

And given the state that this footage must have been in, and the painstaking efforts that must have been made to restore it to be able to play not only in 1080p but actually on the Big Screen, it does look tremendous. Perhaps it's never going to be reference, or demo, but it's a leading example of the genuine power that modern film restoration can have upon preserving history in a way that nobody could have ever expected.

They Shall Not Grow Old Blu-ray Sound The accompanying audio track is a strong affair.

Dominated by a near-constant narration from seemingly countless contributors whose discussions of training, tanks, trenches and terrors on the battlefield are perfectly matched up to the on-screen events, the accompanying DTS-HD Master Audio 5.1 track is a strong affair, albeit seldom afforded an opportunity to just throw you into battlefield chaos, with the words largely subduing the background maelstrom of bullets and bombs.

A couple of brief shelling moments - including some night-time fireworks - will shock you back into the present, and there is some welcome LFE depth to the background cacophony, but this is still an almost entirely dialogue-driven affair, and whilst the dialogue has been well-preserved and well-rendered here, that leaves an equally frontally-dominated feature where even the cleverly subtle score still takes a distinct far back seat.

They Shall Not Grow Old Blu-ray Extras There's a half-hour video Interview with filmmaker Peter Jackson about the work he did to bring this personal project to life.

They Shall Not Grow Old Blu-ray Verdict

They Shall Not Grow Old Blu-ray Review This isn't just vintage silent footage from way back when; it's newly dubbed and impressively restored video footage from the front line.

They Shall Not Grow Old will likely go down as an important piece of history itself, preserving the events of 100 years ago in a perfectly constructed capsule of interview narration from the survivors, propaganda and artwork from the period, and fabulously restored and surprisingly well coloured footage from the front line, all blended together into a cohesive charting of The Great War. The Blu-ray release affords it a strong video presentation, notwithstanding the rather obvious source limitations of course, solid audio and a little background from Jackson himself. The film itself will likely teach you more about World War One - and war in general - than an entire childhood of history lessons and a slew of big budget feature films all rolled into one. Thanks to They Shall Not Grow Old, even after a century, We Shall Never Forget.