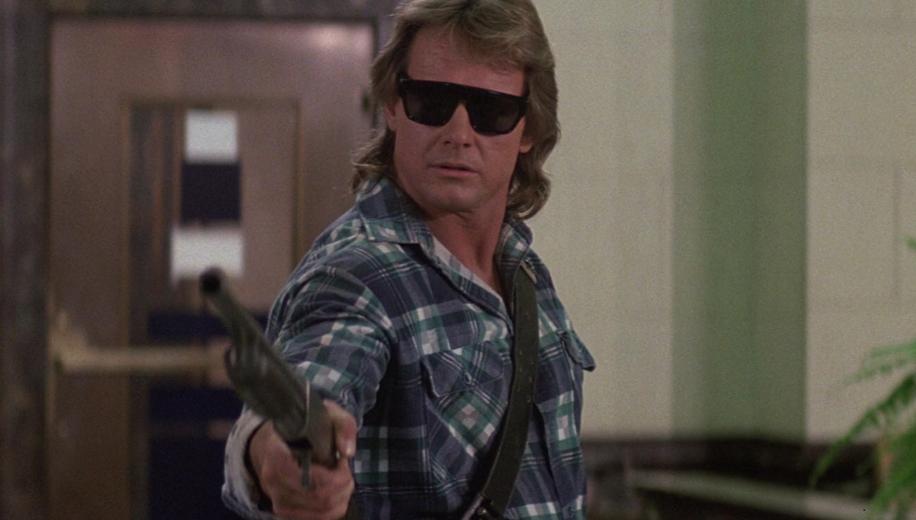 Put the glasses on!

When a downtrodden drifter walks into town, wanting nothing but decent pay for a hard day’s work, he doesn’t expect to discover the driving force behind the growing disparity between the rich and the poor. As the divide widens, the poor live in hastily thrown together shanty towns, while the rich get richer. After finding a pair of sunglasses, the drifter discovers a hidden, invisible world: one where grotesque aliens have taken control, subduing the humans and keeping them poor and destitute, while the privileged few gain riches beyond measure. Incensed, he takes up arms, determined to expose the truth and wake up the human race.

Based loosely on the novel Eight O’Clock In The Morning, by Ray Nelson, director John Carpenter took the basic premise, expanded it, added some eighties hedonism, action, wit and cynicism to create a piece that works both as a swiping attack on capitalism and an action/comedy buddy movie. Unveiling the story over the first act, the audience is drawn into the plight, although the pacing does go a bit haywire later, drawing on action and consequence to get to the climax.

Keith David, from The Thing (1982) teams up with wrestler Roddy Piper, in the lead role as the drifter, and the pair make an unlikely odd couple. Their brutal, mid-film fight forms the basis for their friendship before they take on the might of the invading aliens. It is a seductive movie, asking the questions of what would you do when offered untold wealth: sell out or fight back? They Live might not be the best Carpenter flick, but there are enough staples to keep it in the running.

They Live was shot using Panavision Panaflex Gold cameras on 35mm film. This 2018 release was made using the original camera negative which was scanned at 4K resolution, in 16bit, with the application of ACES (Academy Color Encoding System) to the restoration process, which resulted in the creation of a 4K DCP (Digital Cinema Package) utilised for the creation of this Ultra HD Blu-ray release.

The restoration and new UHD version were colour graded and approved in Los Angeles by the Cinematographer, Gary B. Kibbe (ASC).

The grading given to this new restoration is stunning; at once breathing new life into the image, but still retaining the overall look and feel of the original source. Detail is not a massive leap up, but there are clear indications of improvements: skin texture (pores, wrinkles, hair lines) and clothing weaves show a little improvement, but the main advantage is with the city vistas (underneath Holly’s house, or overlooking the shanty town) which are cleaner and better defined, and with crowd scenes (either of the police raids) where definition is keener.

The WGC and HDR ensure that colours are far richer and stronger than ever before; skin tones positively glow, while the primaries, red and blue, are vibrant and defiant – check out the flares during the police raids, or the blue and red emergency lighting on the cars; how rich and strong it now appears. Daylight is brighter and has greater depth, while sunsets are intense. Blacks are deep and inky adding significant depth to the frame, holding shadow detail when needed and being impenetrable when required; checkout night time in shanty town or the night raid. There was the very occasional blink and you miss it greying during one nightscene, but hardly worth mentioning. The white end of the scale is clear and bright, daytime shows off the best highlights (the sheen on the workman’s tools for example) while there is no hint of clipping.

Digitally, there are no compression issues or artefacts. The original source is perfect, with a decent enough grain structure. The opening credits are a tad green and show the worst of the grain, but once passed there is nothing to worry about. Awesome attention to detail.

Unfortunately, the disc has not been up-graded to the immersive surround tracks, so no Dolby Atmos or DTS-X, what we do have is the same DTS-HD MA 5.1 track that adorned the previous US release. (Be sure to select it, the default is LPCM 2.0). A pretty lively affair that covers most of the bases. The surrounds make good use of the sound environment, bringing out the ambience of many scenes (the building site, shanty town, award ceremony as examples) while stereo effects are used throughout, cars moving past etc. while the bigger set pieces, i.e. the police attacks, are awash with detail and effects.

Bass is tremendously deep and powerful when applied to the score, but LF effects are somewhat lesser in impact, yet manage to keep the sub happy. Dialogue is clear and precise, held to the front for the most part, but given a little directionality when needed, and sounds very natural. There is a nice sense of layering in the mix, helicopters flying overhead, and crowd scenes are good examples. Overall a decent track. The UHD has no extras at all; but the overall package is pretty impressive. Listed below are the contents as provided by the advertising material; we have been unable to view them.

They Live hit theatres in 1988, during the Reagan years and is a loose commentary on the capitalism excesses of the decade. Shot through with Carpenter’s wit, a heavy dose of cynicism and brutal action, it is, in many ways, typical of the director’s output. The story of a downtrodden man finding out about an alien invasion is cleverly unveiled, even if the pacing goes a bit haywire towards the end. Terrific performances, as well as action set pieces, keep this one high in the ratings, even if it is not quite up there with Carpenter’s best.

As a UHD 4K package, this set from Studiocanal is pretty awesome. The restoration from a new scan, presented in native 4K is simply stunning; detail, colouring, black levels, white levels are all improved, while still retaining the overall look of a late eighties film; breath-taking. The sound may not have had an upgrade, but the DTS-HD MA 5.1 track is no slouch, being bass heavy, effects driven and clean and precise. And the extras package is out of this world; bringing together just about all the features from previous releases as well as artwork, booklets and even a sound track CD – what more could you ask for?