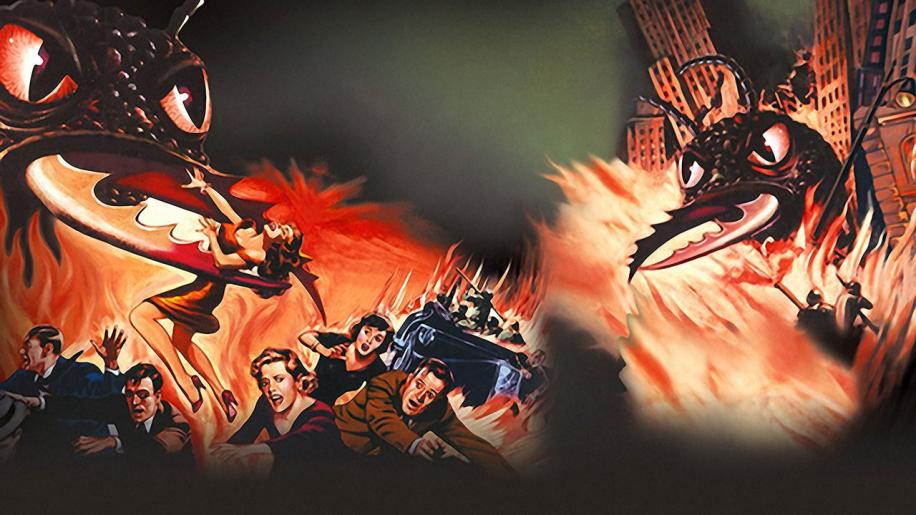 There's no way that Them! has ever looked better than here on this Warner release. The full screen 1.33:1 image is a true gleaming monochromatic delight. Evidently extensively restored with hardly any grain or print damage in sight - other than the odd frame judder - this is a tremendous transfer. The picture is very clean and sharp, often crystal clear. Distances are well delineated - the far ridges across the far desert looking especially good. Close-ups may exhibit a tiny amount of grain but they are still beautifully crisp and stable.

Black levels are pretty strong too, although they do occasionally show a slight amount of faint blocking - Gramps' store and the storm-drains - but, overall, they work very well. Again, Gramps' store benefits from some great shadow-play. Colour even shows up during the title sequence, with the word Them! literally screaming off the screen in shrill, shrieking red and blue against the stark black and white background. It's unusual to see, but it is a delicious touch.

Detail is very well rendered, just check out the sand whipped up by the wind during the Medfords' first desert visit or the shining buttons on the State Police uniforms, or the nervous twinkle in Ed Blackburn's eyes. Even finite detail is captured well - the fractured piece from the girl's broken doll and the fabric torn from her dressing gown. Flames and muzzle-flashes from the machine guns look nice and explosion-fans can happily enjoy swell deliveries of phosphorous grenades and bazooka-blasts. So, barring some occasional, and only minimal artifacting, this is a sterling transfer of a vintage movie. Very well done indeed. Unfortunately, there isn't really much to be said about the mono track presented here. The Dolby Digital 1.0 track is perfectly clear and delivers the audio without hiss or crackle, drop-out or that annoying submerged quality that sometimes accompanies much older movies. Gunfire and explosions sound efficient, voices come across well and the high-pitched screaming still brings a nervous smirk to your face. The incessant howling of the desert wind sounds wonderfully eerie, as does that incredible stridulation of the ants in what is probably a cleaner rendition than even the original audiences heard back in 1954. But, like I said about the Artic winds in The Thing From Another World, it would be really something to hear them echoing around the living room in full 5.1. Oh boy, just imagine it - Ed Blackburn's lone vigil at the store as his buddy drives off and the wind whistles and the ants begin to call. Mind you, we do get a slightly more beefed up version of the frightening chittering in Dolby Digital 2.0 playing over the menus.

Not bad at all then, but certainly leaves room for a possible makeover in future editions. Firstly, the menu screens are pretty nifty, if a little cluttered. They are in the garish, over-the-top style of lurid vintage newspaper front-pages, full of glaring headlines and sensational slogans in keeping with the story of the film. Hitting certain headlines allows you into the few extra features.

The archival montage is a joy. Running for just three minutes, we get clapper-board introductions to various behind-the-scenes snippets of the monster ants being manipulated and put through their paces in several key scenes from the movie, and even some real ants rehearsing! This includes some FX test footage, too. Be warned though, that after the relatively cosy 1.0 channel sound of the film, this roars into life with a rather loud 2-channel mix. Once again, this all proves that the giant ants ARE great ... until they move, that is.

The Theatrical Trailer (3.13 mins) is really the entire film in condensed form. It manages to show all the best bits and vast amounts of the rest, too, and all lorded over by the most whacked-out voice-over guy in history.

We also get a cast list and sneak peaks at other creature features including the likes of far inferior Tarantula (which came out the following year), The Deadly Mantis and The Black Scorpion amongst others.

The effects montage is worth a look, but really, as with many of these vintage chillers, I think an effort should really be made to bolster them with commentaries, at least. A creature-feature of the purest, most distilled form. Book-ended by the eerie and the fantastic, backed by solid performances and boasting acclaimed effects that still send a shiver or two down the spine despite the passage of time and technology. Them! provides some indelible imagery too - the little girl in shock, the nightmarish descent into the nest and the iconic jeep patrols burrowing down into the storm drains. Outstanding entertainment from the very top drawer - and also one that you can recreate with an ant-farm and some of those old Airfix soldiers. Now that's nostalgia for you!

Next time, folks, we can cast the runes together because it's the turn of Jacques Tourneur's Night Of The Demon. Sweet dreams.