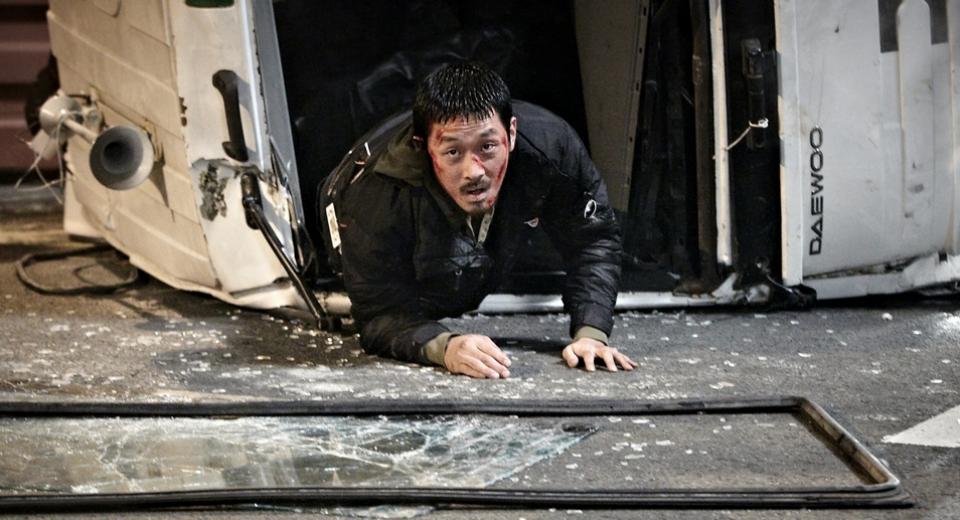 The disc presents a theatrically correct widescreen 2.35:1 1080p transfer using the AVC MPEG4 codec. This movie follows the now usual practice of shooting on 35mm and transferring to edit digitally. As is common with this genre, many shots are quite dark or have muted colours. Some noise is evident and compression of black levels has also occurred probably as a result of the colourising process. As previously mentioned, there is much handheld wobbly camera work, resulting in the potential for plenty of motion issues if your TV cannot keep up with the action. On the whole, picture quality is better than one might expect for the genre, but lighting and exposure has been compromised, resulting in a wider range of focal length than might be expect for a major motion picture. This means that in some scenes, the differentiation between main characters and the backgrounds is not as sharply defined as one might expect.

The transfer to Blu-ray is good, with no visible artefacts, even during the fasted moving segments. It was noticed that the first second or so of the film producer’s title is missing, with the music starting way too abruptly.

Another issue with the screener disc supplied was that it refused to play on a couple of Blu-Ray laptops, but play faultlessly on 2 different Blu-Ray players. This could simply be due to the lower read strength of recordable discs, but may be evidence of a minor incompatibility issue. It should be stressed however, that these comments relate to the screener (A pre-production, limited run disc) and may not affect the full release. There is only one soundtrack presented on the disc - Audio: DTS HD Master 5.1 – Korean with English subtitles.

The care and attention that has gone into this film is no more evident than in the sound track. The music score is moody, atmospheric and beautifully produced. Dialogue is fairly muted, but as it is all Korean and Mandarin Chinese, this is hardly an issue. Subtitles are not burnt into the main picture, but are automatically selected from the normal sub title options. There are very few typos or humorous gaffs and no loss of understanding or context.

The surround sound is a little low in level, with some fairly unsubtle effects from time to time. An attempt has been made to give the illusion of vehicle drive bys, but this largely fails to impress. Fortunately these are very small proportion of the film and do not spoil the overall effect. There is very little that feels false about the effects. The music score being the dominant part of the soundtrack with a light atmospheric layer

The ultra low sub around the 20Hz range is somewhat uneven, suggesting when mastered that this was not audible or at least, was ignored. These frequencies are not usually reproduced in cinemas to any great extent, but many home cinema subs most certainly will. This is most noticeable where effects have been added over car crashes and the occasional explosion. The bottom register is missing, while for other less major effects it comes rumbling in at a pace. Not a reference disc by any stretch. The extras were good in some respects (If only for the amount of content), but the quality seriously disappointed. The UK and Korean trailers were fine, but the “making of” film suffers from extremely poor video almost to the point of being unwatchable.

Made in 4:3 SD, Dolby Digital 2.0 and subtitled from original Korean, it is well over an hour long. It makes excellent background research around the film itself, helping to place characters and locations into the storyline. It does however reveal some of the plot of the film, but not the key points or eventual outcome.

The main issue is the poor conversion with some serious picture stuttering throughout. This appears to be on original transfer or introduced during the editing process, as cut in scenes of film are fine. The varied colour balance, poor quality and exposure coupled with the stuttering lead to the opinion that little value has been placed upon this production, which is a shame as it is interesting and well put together.

On the plus side, it has good subtitles and by sheer length alone makes for an absorbing watch. It features interviews with the director, main cast, stunt director and designers, plus plenty of behind the scenes footage of some of the set pieces.

It is quite funny to see the Korean film making process – no camera tracking vehicles or car trailers, just cameras fixed to the car with a generator roped into the boot! Special effects and blue screen were obviously used to a minimum, but the fake wound makers were obviously working overtime for much of the shoot.

The menu is straight forward (No pop up menu is available, with just a background keyed version of the main menu offered) with access to the main movie, a usual and sensibly designed chapter list plus the extras. This is no technical masterpiece, but when measured against some of its peers (And even its older sibling “The Chase”) is well made and produced. This film might be one to check out motion compensation and the ability to resolve low level picture information, but there is little else to trouble most systems. Where many lower budget movies fall down is the lack of decent lighting and poor camera work and this one is no exception. Look hard and the detail is there, but there are just too many issues to ignore. The sound while generally good is not going to blow your socks off. It simply does not have the level of polish we have come to expect from Western releases.

As an example of its genre, this is a well made and sophisticated movie. In parts brutal and gruesome, but balanced with an absorbing story line and quite penetrable despite the language and cultural barriers. The music score also is excellent, indeed one of the best to come out of Korea so far. This type of film is going to appeal to a fairly small cross section of society, so will never be a huge hit. The at times confused story line is a little distracting and both the ending and twist in the tale is a little predictable. If however you like gritty, gory crime films with plenty of martial arts and believable locations, then you will not be disappointed. It’s an awful lot of action crammed into a little over 2 ½ hours and is a credible second outing for Director Hong-jin Na.