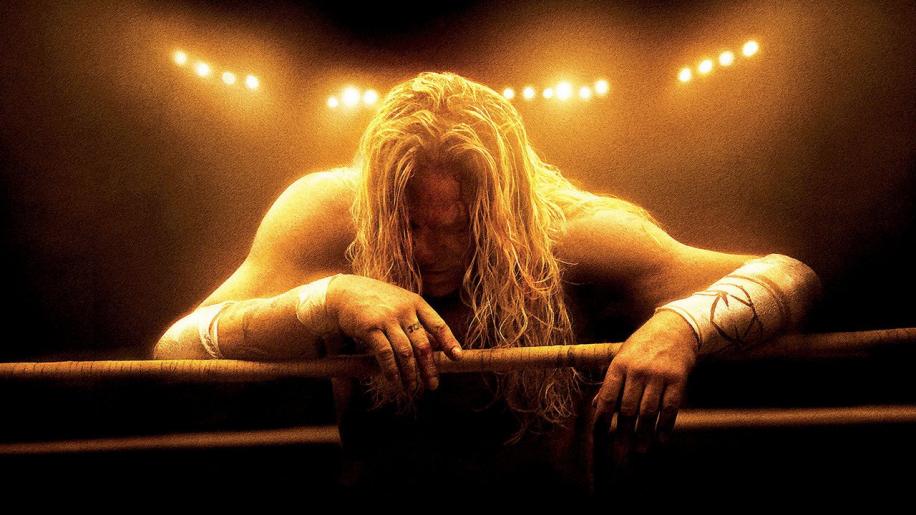 Back from his Hollywood exile the newly reformed, significantly less reckless Mickey Rourke has had a tough time of it carving out a decent career for himself. In my opinion his real comeback was four years ago, when he did a brilliant starring part in Robert Rodriguez's imaginatively faithful adaptation of Frank Miller's dark Sin City graphic novels. It was one of the best performances of his career, but off the back of his success with it, Rourke was still not landing (or perhaps not choosing) the roles required to truly cement his return to stardom. On paper, working with the likes of Tony (Man on Fire) Scott and John (Shakespeare in Love) Madden must have felt like a dead cert career move, and even playing a villain in the child-friendly Stormbreaker should have given him some credibility as a fee earner, but the reality was that these films got him nowhere. Scott's over-the-top Domino was a little too excessive, if only because it purported to be a true story, and Madden's clumsy interpretation of the excellent Elmore Leonard story Killshot would have been simply perfect for him but for the endless rewrites and reshoots that have left it floating in post-production hell for nearly 2 years. No, none of his choices over the last few years have really secured his star power, until he signed on - for no pay - to do Darren Aronofsky's The Wrestler.

Randy 'The Ram' Robinson was once a legend in the ring, but the decades have seen his popularity wane, his fame dwindle and his age become more and more of an issue, and have left him working part-time in a supermarket whilst trying to keep his foot in the wrestling world through small performance gigs at schools, and low-level wrestling show-bouts. With his health a concern, and threatened with the fact that he may have to give up his one true passion permanently, Randy tries to reform his connections with those close to him - namely his estranged teenage daughter and his long-term sweetheart, a forty-something stripper who has always refused to acknowledge her feelings for him. Trying desperately to live a 'normal' life, he finds things almost impossible to cope with, the only place where he knows what to do and how to do it being in the ring, and when faced with the opportunity to return for one last bout with his arch-nemesis from over two decades previously he considers whether it is worth risking his life for - and whether, indeed, he has anything left to live for.

“When you live hard and you play hard and burn the candle at both ends, you pay the price for it. You know, in this life you can lose everything you love, everything that loves you.”

Less a movie about wrestling, and penned specifically with Rourke in mind, this is a tale clearly designed to reflect the troubled actor's own tragic history, and desperate struggle to return to some semblance of glory, and it is this inescapable fact that gives Rourke's performance the edge to warrant such plaudits as he has received. He may have once been tipped to be the next Brando (back in the days when Christian Slater was supposed to have the potential to be the next Jack Nicholson) but some decent, if damaging, rounds on the professional boxing circuit, decades of excesses of drugs and alcohol, and some less than successful visits to the plastic surgeon left him nothing more than a middle-aged could-have-been, who almost looked better giving a performance under heavy facial prosthetics in Sin City, than he would have done without them. How was this broken man supposed to win an Oscar? Even after seeing his standout performance in Sin City, seeing that he was clearly still capable of pulling off that method-acting magic from days long gone, I did not think this could happen. And yet here, giving the performance of his career, embodying and totally embracing a character so utterly close-to-home for him, all I can feel is that he was completely robbed of a much-deserved Oscar. I cannot remember the last time I saw an actor embrace a role so utterly - Day-Lewis came close last year in There Will Be Blood (for which he rightfully got Best Actor) - but Rourke really went above and beyond to become this wrestler, not just physically, but also emotionally and psychologically. He tears seem genuine, from a life populated by wasted potential, missed opportunities and lost time, the emotional distance from his daughter - now grown up and resenting his very existence with a bitterness that crushes his soul, and the difficulty he has at consolidating the bond that he clearly has with his stripper friend, who, in her own way, also refuses to give up the only thing she was ever good at and move on to a better life. In the ring, Rourke, cut himself, took 10-foot dives onto concrete and performed many of the rest of his own stunts. Those are probably real staples being pulled from this guy - so devoted he is to his art. A truly underrated class actor, by the end of the movie you are left feeling emotionally drained by his powerhouse performance. A loveable (check out his improvised deli scene) but broken hulk of a man who has nothing real, nothing tangible left to hold on to. In one of the most poignant speeches of the movie, you wonder whether it is Rourke's tortured character talking to the audience, or the troubled actor himself.

“I'm an old broken down piece of meat, and I'm alone. And I deserve to be alone. I just don't want you to hate me.”

Playing his daughter we have Thirteen's Evan Rachel Wood, who coldly embodies the damaged girl, so hurt by the absence of her father during her formative years that she still finds it difficult to trust and connect with people. Wood's early performance in Thirteen showed us just what she was capable of, and here she does well, particularly in the smaller, more intimate scenes as the father and daughter try to talk through their differences. And Marisa Tomei also delivers a superior performance as the girl Randy has been pining for all this time, proving not only does she still have a stunning physique (in the same way as Meg Ryan, Tomei has decided in her later years to do more 'revealing' performances, as in both this and the disappointing drama Before the Devil knows you're Dead) but she still has the charisma to charm and engage in a lead female role. Utterly loveable, yet so out-of-touch with her emotions and true feelings about Randy, her character's plight mirrors our hero's own and their interesting story arc is just as compelling - and touching - as the main event.

As a movie, The Wrestler delivers only on one level, and without that it will likely fail to engage anybody in the audience at all - that single noteworthy aspect is Rourke (and his character). Obviously along the way we see his plight and the characters he engages with, but this is a standout movie purely because it shows us simply the best of what an actor can do. Just as many would wonder why watch a movie about a loathed, obsessive oil tycoon - and the answer was Daniel Day-Lewis' amazing performance - here the question is why watch a movie about an ageing, loser of an ex-wrestler, the answer is Mickey Rourke. He really should have won the Oscar, but with over half a dozen different - and decent - movies in the pipeline (from Stallone's ultimate 80s action-hero cast in The Expendible to Iron Man 2 to 13 - the remake of 13 Tzameti) at least it looks like he is finally getting the roles that he always deserved. The Wrestler, however, will likely remain the pinnacle of the twilight era in this superior actor's fractured career, and as such it comes highly recommended.

“Now I don't hear as good as I used to and I forget stuff and I ain't as pretty as I used to be but god damn it I'm still standing here.”