Rounds off the trilogy well 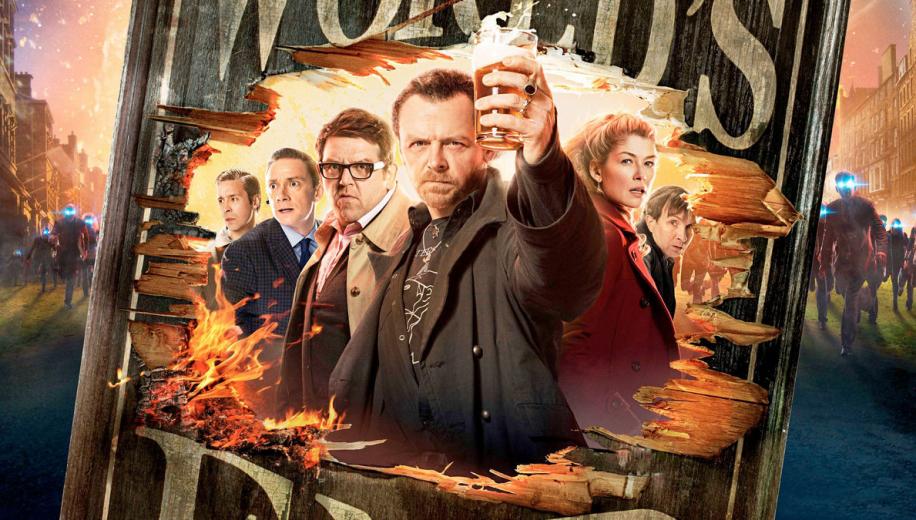 Leave a light on good lady, for though we may return with a twinkle in our eyes, we will be in truth blind - drunk!


Tonight’s feature, The World’s End, the third in the ‘Cornetto trilogy’, is largely regarded as the runt of the litter, which is a shame as it contains much of the wry humour and wit that makes Shaun and Fuzz almost universally adored. Taking on science fiction, with a dash of horror, End’s influences are many and varied, with the themes of being subjugated and replaced by doppelgangers forming a major part of the runtime.

The story is told through Gary King (Simon Pegg, on top form) a forty-something man-child reliving his youth with his old school mates, by trying to complete the ‘Golden Mile’ a crawl of twelve pubs, that sees them all come to terms with unfinished business, lay old wounds to rest and conquer their fears while trying to stave off an alien invasion that has replaced a large part of the population.

There is a who’s who of filmic references, wrapped up in a tight comedic script that fires one liners like a Gatling gun. It is also not afraid to go dark - very dark. Our protagonists don’t all make it out alive, for one, and whilst the ending does have a victory, it is at huge cost, something it does not wimp out on, and flies in the face of the other ‘Cornetto’s’ that wrap up with a smile and a wink. It can be noted, also, that the close friendship between the two leads of Pegg and Frost is missing for a large part of the film, so that bond and quick fire gags that the two share so effortlessly, unlike the other two films, is not front and centre; and even though they ‘kiss and make up’ towards the end, without it, the film seems a bit … wrong. It is, perhaps, this, that marks End as standing out from the other two films in the trilogy, for in truth it is just as biting in its commentary and just as loving in its homages, and does round off the trilogy well, making it a fitting conclusion.


The World’s End was shot using a combination of Arriflex 16 SR2, Arriflex 235, Arriflex 435 and Panavision Panaflex Millennium XL2 cameras on 35mm film and finished as a 2K DI which has been used for this Ultra HD Blu-ray release. The disc presents an up-scaled 3840 x 2160p resolution image in the correct widescreen 2.35:1 aspect ratio, and uses 10-bit video depth, a Wide Colour Gamut (WCG), High Dynamic Range in the form of HDR10+, and is encoded using the HEVC (H.265) codec. We reviewed the Region free UK Ultra HD Blu-ray release of The World’s End on a Panasonic 65DX902B Ultra HD 4K TV with a Panasonic DMP-UB400 Ultra HD Blu-ray player.

There is only a very modest up-tick in finite detail, staples like skin texture and clothing weaves are well defined and hold sway, but they always did; it is more to do with the resolution of the image where there is improvement; the lights from the blank’s heads are sharper and show definition, street lamps and car headlights, the same.

The WCG and HDR do improve things further with a depth to colours that the Blu-ray cannot match; check out the lighting in the disco, particularly in the cupboard with Mad Basil where the reds and blues are phenomenal.

Black levels are improved giving rise to a better depth to frame and some better shadow detail, while the white end of the scale is even better, with lights and flames really shining off the screen.

The original source is clean and bright with a decent grain structure, while digitally there are no compression issues. This is not really a significant upgrade in terms of picture quality, the differences are there but nowhere near as pronounced as one might expect.

No such issues with the DTS: X, which is engaging and absorbing. Dialogue is clear and well prioritised towards the frontal array, but gives the required directionality when required. Effects are numerous and make plenty of use of the surrounds and overhead channels, the fight scenes being of particular delight. The opening narration sits high in 3D space as well as the climactic standoff between the Network and our heroes. Bass is deep and strong, adding decent impact to effects with plenty of LF effects to keep the sub happy. The score comes across with gusto and, again, is held well within the mix and surround environment.


The film comes in a set with the other two Cornettos, along with post cards, beer mats and a poster for the ‘Golden Mile’.


Regarded as the weakest film in the ‘Cornetto Trilogy’, The World’s End nevertheless lives up to expectation by taking on science fiction tropes with the same wit and verve as the previous films had with horror and action. Pegg is on terrific form and is ably supported, while the story maintains a strong narrative and drive. It is not afraid to go dark, either, both in terms of character survival and the bleak ending, but the frosty nature between the two leads doesn’t quite sit right, and it is, perhaps, this that makes it stand out so far from its ‘it-all-ends-well’ peers.

As a 4K Blu-ray set the package from Universal is pretty good, the up-scaled 4K image is not a massive step up from the Blu-ray but there are improvements in colour reproduction and definition; while the DTS: X surround track is tremendous with plenty of effects and bass. The extras package is a reproduction of what has previously been available and is indeed on the same Blu-ray.