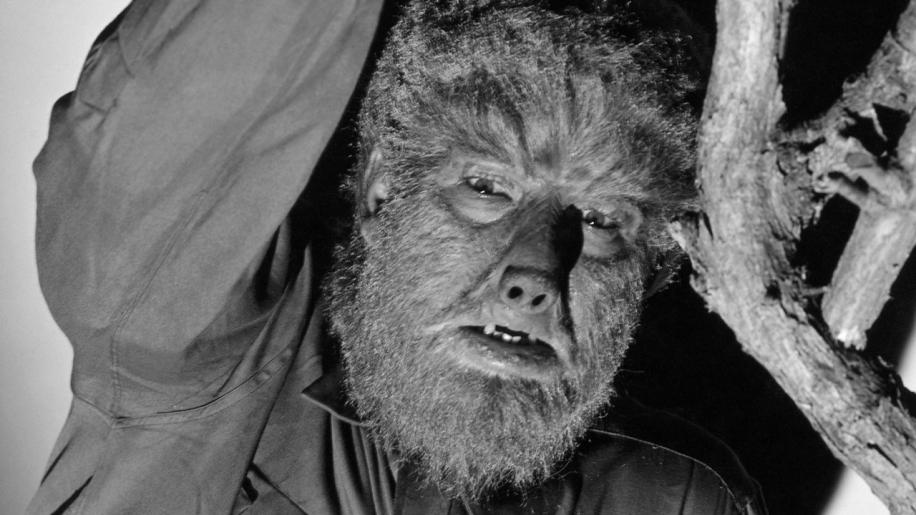 Well, my hopes that this new UK edition would sport an improved transfer over previous ones were disappointed. In fact, I would say that this image looks a little more faded and certainly a touch brighter than the Monster Legacy transfer from a few years ago. But, having said that, most of what I said about that older transfer still applies here - so we may as well run with that.

Presented in full screen 1.33:1, The Wolf Man, as it is seen here, is taken from the earlier restored print. Although there are still many ticks, nicks, scratches and speckles on show, the image is still very clean and strong-looking. Grain is obviously apparent but is nowhere near as detrimental as it could have been and the frames have barely a judder throughout the running time. Scene transitions hardly suffer from the wobbles, pops and contrast changes that often sabotage such vintage fare, and the grey-scale of the transfer is perfectly acceptable. Blacks may not be pitch exactly, but they are robust enough to keep the mood sustained. With a picture that is often composed of shadow and mist, the contrast does a fine job of maintaining the look and texture of the film. There are a few occasions when the image has a narrow vertical line over on the extreme right hand side - notably in the seconds just after Larry has battled Bela's wolf - but this shouldn't distract too much from what is still a very competent transfer for such a vintage.

Another release of The Wolf Man (again R1) actually looks a little brighter and cleaner, but I don't think the level of detail is quite as good. The moisture of the dark bark of the trees seems to glisten slightly more here, with more detail apparent on the rest of the foliage as well. The Wolf Man's whiskerage has a tad more finite separation and the oddments in the antique shop and in Sir John's extensive halls and sitting rooms appear a little sharper. Mind you, I have since sold that other copy on, so I no longer have the two to properly compare. But this is definitely better looking than the versions played out during the movie's many TV airings.

At the time of writing, I know of no plans to release The Wolf Man in hi-def, but I can see that time coming, especially as the lavish remake is sure to be a Blu-ray dynamite. Universal released some terrific and freshly-restored (again) SD transfers of Dracula, Frankenstein (75th Anniversary issues, the pair - see separate reviews), as well as Psycho and Double Indemnity and the improvements were telling. So, it is a safe bet that The Wolf Man will see further restoration sometime in the future. There's no real difference in the audio department, either. But I did notice that, after having watched the earlier version several times in the run-up to the release of the remake, this UK edition seemed slightly quieter on the whole. Once again, however, my report still seems fairly accurate.

We get the same old Dolby Digital 2.0 mono track as before, which had been nicely cleaned up and offered no massively niggly drop-outs, pops or any overt hiss to distract. Obviously, there isn't a lot to expect from such an old track but it still provides plenty of that all-important atmosphere. Dialogue remains consistently clear and discernible, even the shouting in the village when the wolf's howling is heard. Evelyn Ankers' screaming comes across well, as do the metallic impacts of the pellets that Larry and Andrews fire at the pop-up targets, and the playful hubbub of the gypsy camp sounds active enough for something as old as this and as unconcerned with the intricacies of audio detail. Growling and snarling have a little teensy bit of aggression - certainly effective enough for most of us - and I have to confess that I still like the emphatic little pat that Larry slaps on his chauffeur's shoulder when they finally get a glimpse of Talbot Castle near the start ... even here you get the impression of Chaney's clumsy, brutish strength.

As with a lot of vintage movies, the score can sound quite harsh and overbearing - sudden percussive passages can barrage the track and the high ends can struggle a bit. But, to be fair, there is little to the track that is off-putting. Well, folks, this is where the fur flies, I'm afraid. Whilst the new Legacy Edition is a double-discer and sports some great new features, this UK incarnation carries only the Tom Weaver commentary, the John Landis-fronted Monster By Moonlight and the admittedly nice Wolf Man Gallery that plays a 6-minute montage of posters, lobby cards, production stills and archive publicity photographs beneath the film's fantastic score. For the casual fan, this is fine, of course, but the more devout will be forced to seek out the packed US counterpart.

Horror film historian Tom Weaver provides an excellent, anecdote-riddled commentary track that, for anyone already acquainted with these old school chillers, follows the familiar path of rapid-fire, fact-packed, everything-but-the-kitchen-sink chronicling. Weaver is good fun though, and very entertaining in his thousand-word-a-minute, scholarly manner. The style he adopts is affable but fast-paced and he likes to provide a huge amount of incidental detail for practically everyone seen on-screen ... and even those that may be related to them. Hardly a scene goes by without a handful of stories and quotations from, and about, the cast, but the track is extremely warm-hearted and detailed. I like the way that he brings in elements from the original script and uses them in an attempt to make sense of narrative shortcomings and plot-holes that may have resulted in such continuity errors in the finished version, things such as Bela's wolf being four-legged whilst Larry's is a bipedal beast. He also makes reference to scenes that were altered or dropped entirely, such as the original version having Larry battle a performing bear that the gypsies have in their entourage. And the fortunes of the silver wolf-headed cane prop after its services to the film get a mention, too.

Overall, this is a very good track and well worth listening to.

This newer UK release now wisely ditches the dire Stephen Sommers' featurette about werewolves that came previously to coincide with the director's woeful Van Helsing CG-smorgasord, but makes sure to include the brief, but affectionate, tribute to this classic and overall werewolf movie featurette entitled Monsters By Moonlight, hosted by American Werewolf honcho, John Landis.

The US Legacy release contains more features - which we will take a look at accordingly. Despite the likes of Joe Johnson's take on the creature, The Wolf Man is still very much the black-sheep - ironically enough - of the Universal Horror pantheon, yet it remains extremely worthwhile and an expert example of an atmospheric, classy production. It served to give Lon Chaney Jnr a bankable persona and brought many of the supernatural elements of the filmic version of the legend, things that we now take for granted, like silver bullets, to the genre. Watching it now still sends the odd shiver down the spine, but the movie definitely takes a softer approach to the material than many may expect. Even so, those mist-shrouded woods look powerfully evocative and it is wonderful to see Chaney making the role his own with such conviction and vigour. The sequels were of a much lesser quality, although I do have a soft spot for the immediate follow-on, Frankenstein Meets The Wolf Man, which, at least, gave Larry's hairier side much more to do.

But what makes this original version all more delicious now that the remake has finally surfaced is that fact that Benicio Del Toro, Academy-lauded actor that he may be, is not a patch on Lon Chaney Jnr - a figure too often sidelined and dismissed. There can be no argument - he is the Wolf Man ... Del Toro just sports the fur and fangs.

As a DVD presentation, this new UK release of The Wolf Man is in familiar nick, but the extras could have done with being a bit more comprehensive. That said, however, with Weaver's fascinating commentary, the brief documentary and the handsome gallery montage to enjoy, this possibly enough for the more casual wolf-fans out there. But the full-on lycanthropic moon-goons would be well advised to plump for the better stocked R1 Legacy double-discer.