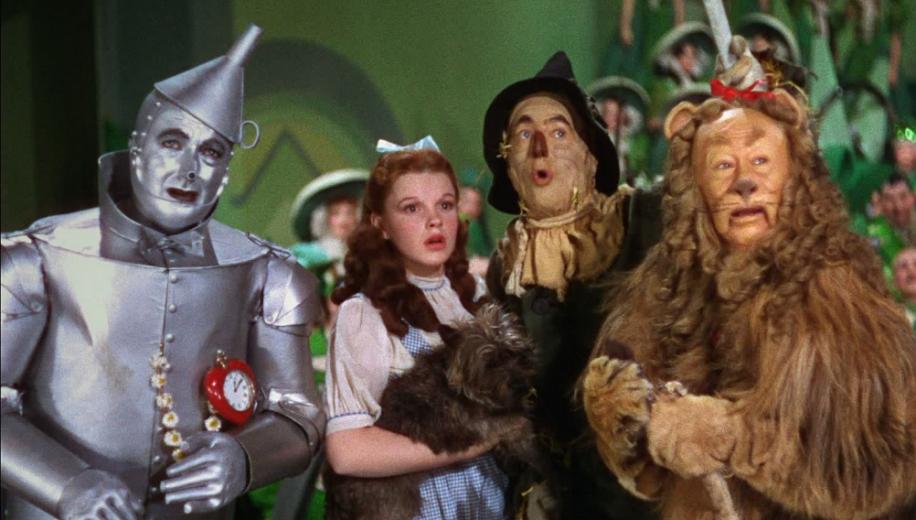 The Wizard of Oz Film Review

Pay no attention to that man behind the curtain.

The Wizard of Oz has a scene in it that has stayed with me since I first saw it, in black and white, on a tiny portable TV in my kitchen when I was about 5 or 6 – the flying monkeys tearing apart the scarecrow. As brief as it is and as silly as it sounds, that scene still sends shivers down my spine.

There isn’t much that hasn’t already been said about tonight’s feature in what is now its 80th anniversary. The tale of Dorothy, a small town, country girl, who is whisked to a faraway land where she immediately kills, and is then instructed to set off with three friends to kill again, has been enjoyed by generations of children and is fondly remembered as much for its songs as well as for its whimsy. A combination of perfect casting, musical genius, technicolour camera work and a script that can be enjoyed on many levels has allowed the film to endure. Indeed, the ‘Somewhere Over the Rainbow’ song become something of an anthem for its then unknown star Judy Garland. (The stories of her hardship on set being a far cry from the sweet innocence she portrays on film).

The filleting of the source novel by L. Frank Baum, allowed the film to shine, and its wholesome message of ‘no place like home’ is inspired. Many have postulated, much like Chitty Chitty Bang Bang, that it is, in fact, a horror film in disguise as a children’s fantasy, and when you see Margret Hamilton’s magnificent turn as the Wicked Witch of the West, with her army of grotesques and her pure evil plans (not to mention the scene at the top) it is easy to see why. Even with the readdressing done by Wicked it is still hard to escape the feeling.

But all told, The Wizard of Oz remains a family favourite, managing to hold onto that magic that makes it so special.


The Wizard of Oz was shot using Technicolor Three-Strip Camera cameras on 35mm film. This 2019 UHD release was made using a previously scanned source, a 4K DI, which has been utilised for this Ultra HD Blu-ray release. The disc presents a native 3840 x 2160p resolution image in the correct 1.37:1 aspect ratio, and uses 10-bit video depth, a Wide Colour Gamut (WCG), High Dynamic Range in the form of both Dolby Vision and HDR10+ formats, and is encoded using the HEVC (H.265) codec. We reviewed the Region free UK Ultra HD Blu-ray release of The Wizard of Oz on a Panasonic 65DX902B Ultra HD 4K TV with a Panasonic DMP-UB400 Ultra HD Blu-ray player.

Just like 2001: A Space Odyssey, The Shining and Unforgiven, The Wizard of Oz has a picture that is gloriously bright, detailed, colourful and film-like, putting all previous releases in the shade. Finite detail is terrific, check out the weave on Dorothy’s dress, or the Scarecrow’s ‘mask’, or the ornate detailing on Glinda’s dress, or Lion’s fur. The flyover the Munchkin’s village shows keen edges throughout, while the distant shot of Emerald City is defiant.


A stunning filmic image up there with the best

The WCG and HDR really add significantly to the colours, how the ruby slippers sparkle, the glint from Emerald City or the rune stones on Glinda’s dress are all terrific, while the colourful costumes worn throughout have never looked so dense. The yellow of the yellow brick road is stunning, while the green of the Emerald City inhabitants has never been so lush. Check out the poppy field or the sparks that come from the ruby slippers when the Witch tries to remove them.

Black level is strong adding some good frame depth, while the white end is pure, giving rise to some tremendous highlights. Digitally there are no compression issues, the source is clean and clear, and the whole has a lovely organic sheen of grain. A stunning filmic image up there with the best.

The English DTS-HD MA 5.1 track does a good job of providing a surround environment, despite the limitations of the source. Dialogue is clear, natural-sounding, dominated by the frontal array but given the odd bit of directionality when required. Stereo effects work well, the twister, spells and Oz’s domain coming out on top. The flying monkey attack is given good separation and directionality.

While it is, of course, the songs that make the best use of the surround field, with ‘crowd songs’ being best of all. Bass is limited but given a hefty boost occasionally, such as when the house lands in Oz, or when Oz is shouting, but otherwise, it fills out the low end enough. A decent enough track.

Audio Commentary – As Above
The Making of The Wizard of Oz – 70 minute feature that delves well behind the scenes with plenty of archive material and interviews, in an extensive piece.
The Wonderful Wizard of Oz Storybook - Angela Lansbury narrates a condensed but animated story.
We Haven't Really Met Properly – A series of biographies of the main players.
Music & Effects Track
Original Mono Track
Sing Along Tracks – Karaoke
Audio Jukebox – 70 minutes of alternate, original and outtake material of many of the songs.
Leo is on the Air Radio Promo – 12 minute extended radio ad for the film.
Good News of 1939 Radio Show – Hour-long radio show featuring interviews with the cast of the film.
12/25/1950 Lux Radio Broadcast – Hour-long Christmas edition of the film for radio.
Stills Galleries – Uncountable amount of images in various galleries.
Trailers.


The Wizard of Oz is a timeless classic, now in its 80th year, continues to enthral audiences with its whimsy, likeable characters, easy flowing plot, foot-tapping songs, quotable lines and bright, colourful outlook. Making a star out of its lead, and an anthem of ‘Somewhere Over the Rainbow’, no matter how many times the film is shown, it still manages to draw an audience. It’s pure class.


The Wizard of Oz is a timeless classic
As a 4K UHD, this set from Warner is pretty good, the native 4K picture is simply stunning – a bright, well detailed image with stunning colouring, strong blacks and a natural film-like image that is up there with the very best the format has to offer. The DTS-HD MA track is detailed, with good separation, clear dialogue and makes good use of the surround environment. The extras package is missing a few bits and bobs from previous releases, and there is nothing new added, but it still covers pretty much everything you need know about the film.