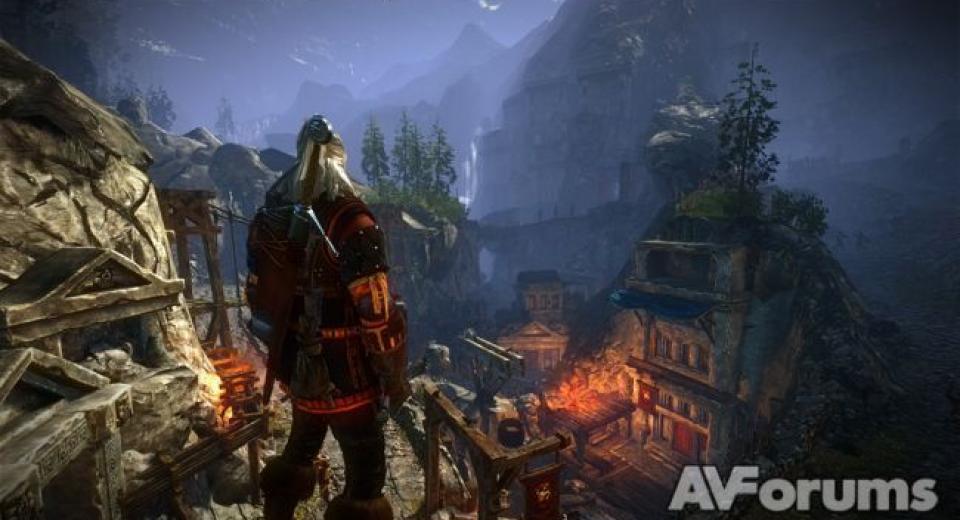 At a time when the relationship between the people who make games and the people who play them is so strained, it's important to recognise when things are done right. For their handling of The Witcher 2, publisher Namco Bandai and developer CD Projekt Red deserve universal praise.

Originally released in 2011 as a PC exclusive, the transition to Xbox 360 is by no means a simple port. In addition to doing the necessary - adjusting the graphics for the console’s hardware and reworking the controls for the gamepad - the ‘Enhanced Edition’ includes hours of new content and a wealth of gameplay improvements. But most impressive of all, owners of the PC version will receive all the extras too, via a free download. Quite a contrast from the Day 1 DLC and related shenanigans we’ve seen from other companies of late, but no more than you’d expect from a developer who clearly cares deeply for the source material.

As well as two videogames, the original books by Polish author Andrzej Sapkowski have been adapted into a TV series (which was itself re-edited into a movie) and a series of comics. CD Projekt Red's interpretation of the franchise has been a huge success: the first game sold over 1.8m copies, and the sequel has sold considerably more. The Witcher 2 tells the story of Geralt of Rivia, the White Wolf. He is a witcher: a swordsman with superhuman magical abilities. Early on in the game he is wrongly accused of regicide (hence "assassins of kings") and sets off in search of the truth about the killer, and about his own mysterious past.

Exploring the unnamed continent is a treat. From the aesthetics to the lore, the high fantasy setting is rich with detail. The game makes a valiant (if ultimately superficial) attempt at tackling social ills, touching on all kinds of issues including class, justice and - most determinedly - racial tensions, which manifest as the cultural clash between humans and non-humans.

This split along genetic lines impacts on the whole game, right down to weapon choices in combat. Swords are either steel or silver, with the former being effective on humans and the latter reserved for use on non-humans. Geralt, as a witcher, also has spells (or ‘signs’) available including a fireball variant, a defensive shield and some kind of Derren Brown enchantment that turns enemies against each other.

The user interface for selecting signs during combat is superbly implemented. They’re accessed from a radial menu - think Mass Effect - but instead of pausing the action, it slows events to a crawl. It gives the player enough time to make a selection without sacrificing the sense of urgency during a heated battle.

And battles certainly are heated. Combat is cruel and unforgiving, particularly early on when the combination of an underpowered character and inexperienced player will often result in an inglorious death for Geralt.

From a control point of view, there’s not much to it. The player has the usual quick and heavy sword strikes at their disposal, and magic is only a button press away. At times Geralt will dance around multiple opponents slashing, stabbing and signing(?) with the fluidity of Batman in one of the Arkham titles. But that is by no means the norm: Fighting typically has a frantic feel about it. The challenge arises from the amount of hits it takes to wear enemies down, and the sheer number of them that come at you at once. In combat, preparation and patience are key. Before getting into a fight, the player will need to take appropriate potions, oil their swords and so on. But more important than any stats modifiers or special equipment is the absolute requirement the game places on you to position Geralt correctly. A handful of blows from behind is usually certain death so it’s crucial to keep enemies in front of the White Wolf.

For players used to games like Demon's Souls, none of this will be news. But anyone expecting more casual fighting should be aware that even on easy, combat is tough. But it’s worth sticking with because once you’ve got the right mindset - that nothing in this game is handed to you on a plate - the frustration ebbs away and fighting becomes more rewarding.

The Witcher 2's branching narrative is a stand out feature. Different choices will lead to substantially different routes through the game; it's no exaggeration to say that the entire second act turns on a single decision. The difference is so fundamental that for many it will surely demand further playthroughs.

I'm mindful of spoilers here, but what I will say is that player choice is felt less in terms of plot and more in terms of setting. In fact the narrative is surprisingly linear, which is probably necessary in order to keep such a dense story coherent.

By videogame standards the script is impressive, but notably more so when characters are idly waxing philosophical than in the plot dump of a cinematic exposition. Some of the strongest dialogue is overheard chatter - those snippets of locals' conversations in the marketplace and so on - or the casual conversations that happen Red Dead Redemption-style en route to the next quest. It’s not all deep and meaningful though; The Witcher 2 is packed full of understated humour; there's an Assassin’s Creed Easter egg, some brilliant nods to Lord of the Rings, and a number of charming anachronisms (exemplified by the sullen man in the Dwarven city of Vergen who shouts names like “Emo!”  and “Cosplayer!” at our hooded hero). The impression of a world inhabited by real people is occasionally undermined by characters’ dialects, which are an odd mixture of UK regional accents. Geralt meets all kinds of fantasy Brits including drunken Scottish Dwarves and squeaky Brummie guardsmen. It would be jarring in any case but here it's amplified by a cast of generally subpar voice actors and enough stilted dialogue and paused interrupts to make the audio editors of the old Resident Evil games blush.

None of that helps the widely-lauded 'mature' portrayal of 'complex' characters in The Witcher 2, which is an interesting, if slightly dubious, claim.

There's no question that Geralt's motivations and actions are more sophisticated than the traditional 'goodie fights baddies' protagonist. But there's more to maturity than graphic violence and excruciatingly awkward bath sex; and there's more to 'complex characters' than moral ambiguity and rampant egotism.

Being a stoic hyper-masculine sort, it's not entirely surprising that the White Wolf's behaviour is mostly unaffected by his ordeals, but it does make him harder to care about. Despite all the people he meets, the personal revelations, and the trauma, he is a broadly static character and less interesting as a result.

Disappointingly, the lack of development also applies to his abilities. There's a training tree that allows players to improve Geralt's alchemy, signs or swordsmanship skills. However most items are passive stats boosters (e.g. get 10% more vitality, take 5% less damage), relatively few actually unlock something new for the player to do in combat. Just as with the writing, there's plenty of character advancement, but little character development.

Having almost everything available from the start means The Witcher 2 inverts the usual learning curve in which players are gradually introduced to their character's controls. Rather, it's all forced into one overburdened, frontloaded tutorial sequence with an expectation that everything will fall into place as the game progresses. One of the main challenges in the early hours of The Witcher 2 is learning to navigate the incoherent in-game menus. There's very little to help a new player to understand why herbs can be found but not used in the inventory screen, or why it's necessary to meditate to drink potions but not to oil swords, and it never becomes clear why there was a need to make exactly the same skill tree screen accessible from both the inventory menu and the entirely separate meditation screen... a rare attempt at convenience, perhaps?

That's just one reason why inventory management isn't much fun. To make matters worse, when Geralt wanders round houses stealing whatever comes to hand while the owner watches on listlessly (did Fallout 3 not move us past this?), everything is picked up with no option to leave valueless trinkets where they lie. There’s a limit to what can be carried before Geralt becomes weighed down, so the player is forced to spend time getting rid of items they never wanted in the first place.

And don't get me started on the autosave feature - or lack thereof. I'd estimate over an hour was lost from deaths where I'd (wrongly) assumed that I'd be thrown back to the point where I completed the last mission. Take it from me, frequent manual saves are absolutely essential if your control pad isn't to end up embedded in your TV.

But minor irritations in such a large game are to be expected; it’s a similar story with the visuals. The Xbox 360 is incapable of producing the graphical output of a high-end PC so texture issues, screen tearing and framerate drops are all quite common, but minor technical bugs need to be kept in perspective.  CD Projekt Red have done an admirable job of bringing the game across and despite the odd glitch The Witcher 2 boasts some of the most stunning and varied visuals of any console game to date.

There's no question that it's a special game, and this is in no small part due to its confidence. It doesn't shy away from the grand environments, the heavy politics, dense exposition, sex, violence... the list goes on. Nothing is half-hearted, but in an undertaking so ambitious, it's impossible for every element to be perfect.

But even with its failings The Witcher 2 ranks as one of the best RPGs in recent years, and for any fan of the genre it really is too good to miss.

From a technical standpoint The Witcher 2 has made a very respectable transition from PC to Xbox 360, with relatively few glitches for a such an ambitious undertaking. CD Projekt RED's love of the material shines through and players who can overlook the user interface and gameplay frustrations will be rewarded with a compelling story further enlivened by a fabulously detailed environment and a real old school gaming challenge. Not for everyone, but a must for fans of RPGs.