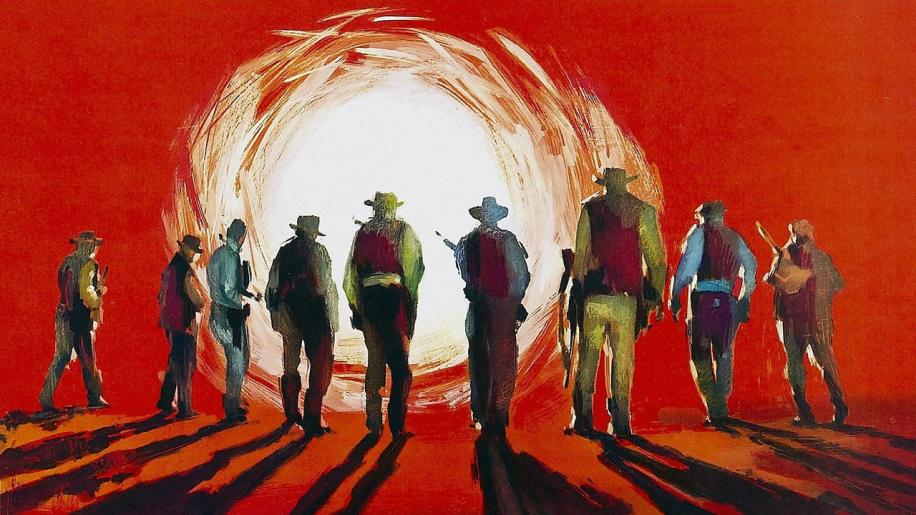 Finally available with an anamorphic transfer, The Wild Bunch has never looked so good. Coming in with roughly its original 2.40:1 aspect, this print is as accurate as it can be to the day it premiered in 1969. The restoration work has removed what little damage there was - I've seen many different versions of the film on TV, video and DVD and, to be honest, the print has always looked very good - but the film now shines. Colours are rich and bold, the dry dusty palette of Mexico looking more vivid than I've seen it before. The blood is deep and bright, splashing like scarlet fireworks all over the screen. The red automobile that Mapache is flaunting is quite striking against the sepia-hued setting. The white of Holden's and Oates' shirts at the end are bright and show up the gore like a garish new design. The blue skies are wonderfully deep and none of this resplendent imagery suffers from over-saturation, smearing or bleeding. Well, there's plenty of bleeding, but you know what I mean.

The detail is incredibly sharp and eye-catching. Weaponry gleams in the sunlight, muzzle flashes and barrel smoke are clearly delineated and, once again, the wounds - entry and exit - have a fabulously etched clarity that, perversely, has you marvelling. Distance shots of landscapes and riders moving across them are far more splendidly realised than I expected, achieving a smart level of clarity even when seen in differing contrasts, such as when the fading light of day afflicts them. Detail in Mapache's encampment is astounding - the texture of the walls and scattered debris, the multitude of faces in the festering crowd - and the colossal amount of bullet-chippings and wreckage wrought about by the bunch ensures that no matter how many times you view this sequence (and, let's face it, this is a segment you will keep returning to) there is always something to gain your attention. Close-ups are beautifully crisp, with the Bunch's faces dripping with such realistic clarity that you'd swear you were right there alongside them. The disc has absolutely no problems with the alternating fast action and slow-mo montages, or the edits, quick-cuts and scene changes. The image is rock steady throughout and the level of grain is satisfying slight and filmic.

Blacks are superb, as well. The interiors have shadows that are dense and thick and un-molested by blocking. And the edge-enhancement that appeared on the previous release seems to have been taken care of. It didn't bother me one iota, this time out.

Well, The Wild Bunch may arrive with a Dolby Digital 5.1 mix (that also appeared on its previous flipper-disc edition) but you'd be hard-pressed to hear anything spectacular emanating from behind you. There are some effects dotted about, though. I mean you can hear the odd bullet ricocheting rear left or right. But the surrounds mainly act as ambience or musical reinforcement. However, the mix is still a very good one, subtle when it needs to be and aggressively loud when the occasion calls for it.

There's plenty of bass on offer, aiding the ammo boxes going up and the collapse of the bridge, and the gunshots sound terrifically sharp and loud. Activity across the front soundstage is bouyant and well spread, deepening the film quite impressively. Voices and action are effectively steered around the three front speakers, making the experience pleasantly involving without being too showy. Oates' frenzied scream sends shivers down the spine and the last-minute imploring from Borgnine to bullet-sponge Pike comes over with haunting resonance. Jerry Fielding's score is evocatively presented, too. When the Bunch are riding out, there's a nice weighty feel to the driving score. And that graceful, tragic moment I mentioned earlier regarding Thornton with Pike's pistol has a searingly sincere clarity that breaks the heart every damn time I hear it, and its presentation here is no exception.

Not a full-on blazing surround sound mix then, but still a delightful aural experience. There is some slight background noise which, fittingly enough, hails mainly from the rears. Not too sure why that should be, but it really doesn't spoil enjoyment of the film.

The Commentary Track, by regular Peckinpah biographers/documentarians Nick Redman, Paul Seydor, Garner Simmons and David Weddle, is one of the best that you are likely to hear, if you are in the right frame of mind to enjoy it. Listening to it is like watching the film with four of its most rabid, talkaholic fans, who simply will not shut up. Ever. For that is exactly what you are doing. At times funny, at others extremely poignant and heartfelt, the track literally staggers under the weight of their collective enthusiasm. What the boys don't know about Peckinpah, the great man probably didn't know either. Sometimes overpowering but always entertaining, the different speakers and the colossal wealth of their rapid-fire fact-spinning may require some disentangling, but this is wholly infectious stuff. I loved every minute of it.

Disc Two kicks off with an eight-minute montage of never-before-seen widescreen outtakes from the River, Desert, Train Robbery and Bridge sequences. But, although nice to see, these add very little as they are primarily just off-cuts.

Then we get a fantastic feature-length documentary entitled Sam Peckinpah's West: Legacy Of A Hollywood Renegade (82.30 mins) which is presented in 13 helpful chapters. The crucial thing about this feature is that it doesn't just chronicle the films he made in this genre, but depicts the life of the man himself - and, most tellingly of all, how it began to disintegrate - as remembered by fans, friends, relatives, fellow filmmakers, actors and critics. Using quite skilful-picked clips from the movies to illustrate pertinent points, and with copious photos, anecdotes and a smart dissemination of his working practices, the documentary goes deep into the badlands of Sam Peckinpah's visionary style and rebellious nature. Narrated by Kris Kristofferson, who starred in Sam's Pat Garret And Billy The Kid (another considerably troubled production) as well as Convoy from a not altogether different genre, the point is made, time and again, that his greatest enemy, beyond the studios, was himself. A very important fact is dished out by his sister, regarding the selling off of the family ranch - an event that broke his heart and certainly helped shape his movie-making ideals and there is some touching sentiments with, and about, his son. This is a thoroughly engrossing and, at times, moving study of his life and work. The participants are honest and articulate and all - including Benicio Del Toro, Billy Bob Thornton, Harry Dean Stanton and L.Q. Jones among others - are determined that to prove that Peckinpah was a genius, although none can dispute the fact that a lot of his output was considerably flawed, as well. Excellent.

Next up is a holdover from the previous DVD edition. The Wild Bunch: An Album In Montage is a thirty-three minute examination of Sam at work, made by Paul Seydor and Nick Redman in 1996. Including some of the director's own recollections and showing us plenty of location footage with the cast and crew and offering up film excerpts, this is a frank, and revealing look behind the scenes at what it took to bring The Wild Bunch to the screen. More bullets than were fired during the entire Mexican Revolution!

A twenty-three minute excerpt from A Simple Adventure Story: Sam Peckinpah, Mexico, and The Wild West is culled from a documentary made by the obsessive Nick Redman. This is merely Redman and some other familiar Peckinpah devotees - whom we've already seen and heard a lot from on this DVD package - musing eloquently on Sam, his movies and his motivations. Quite effectively, we see them investigating some of the film's locations too, with many of their cinematic moments of glory intercut with our boys' perusals. I liked this. Perversely, I've got a lot of time for obsessives. Well providing, of course, that they are obsessing about the same things that I do, that is.

All in all, this is a pretty spectacular set of extras. Yet, the obsessive nature of many of the features means that some more balanced opinion and overview would have actually improved them. That may sound strange coming from a confirmed obsessive like myself, but for a film as important as this, I think some more voices and personalities should have been brought in. However, this package is still excellent value and fans, like me, will be in gore-drenched, slow-motion heaven with it.

The Wild Bunch is a work of genius from a man at the pinnacle of his powers. Strong, well-developed and elegiac in theme, wilfully ferocious in nature, Peckinpah's nailing shut of the western's coffin is a film experience that remains un-dulled by the passage of time. The stars all deliver classic performances - Holden and Ryan, indeed, were never better than here - and the director was firing on all cylinders. Motion pictures had been dragged through the trenches by the short and curlies, and nothing, nothing would ever be the same again. A gut-wrenching masterpiece that created styles and techniques that improved cinema forever more.

The new double-disc edition is a vast improvement too. The AV quality is excellent and the special features present a weighty discourse on the man, his methods and his madness. The troubled life and times of Sam Peckinpah truly were a knife-edge divide between genius and madness - his own metaphorical Tex/Mex border, perhaps? Ten out of ten doesn't seem high enough.