What do you stand for? Not capitalism. Not socialism. So... cynicism? 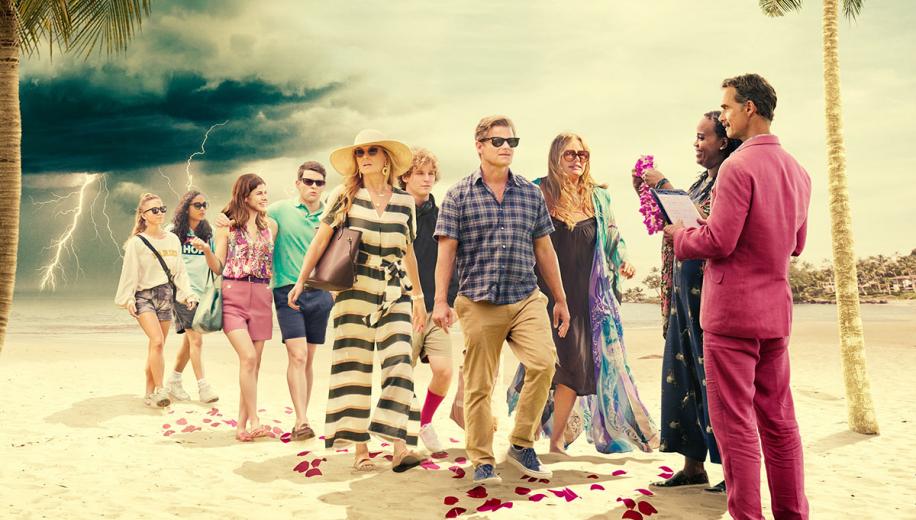 Black comedy - you know what it is when you see it, and it's a term that can undoubtedly be applied to The White Lotus for anyone reaching for a  general description of the series. It has all the hallmarks: cynicism and spite mixed with a good dose of tragicomedy. But there’s a far more bitter taste than usual left after the laughs die away and the disparity between the story's haves and have-nots morphs from funny to uncomfortable to infuriating. The White Lotus is not so much a black comedy, as a bleak comedy.

The arrival of a new group of super-rich holiday makers at a Hawaiian resort sets off a series of mix-ups, minor inconveniences and petty grievances. But this isn’t Fawlty Towers and a dark undercurrent is soon revealed as events begin to cascade toward inevitable tragedy.

As has been seen already this year in the Rosamund Pike and Peter Dinklage starring I Care a Lot, as a writer, the risk of going out of your way to ensure that every one of your dramatis personae is an insufferable jerk is that your audience then has to spend hours hanging out with a bunch of insufferable jerks. And who wants to do that? It makes for some particularly excruciating viewing, especially over the course of a six-part mini-series. The only way to make it really work is by ensuring there’s a spiral of increasingly heightened events to either amuse or horrify. So does Mike White's new series achieve this? Oh boy, does it ever.

The script is acerbic beyond measure. It’s always a pleasure when a series can deliver a couple of snide remarks with a wicked sense of humour, but series writer and director, Mike White (School of Rock) manages to cram in hundreds in rapid succession. To populate a script where barely a line is spoken that isn’t attempting to needle someone about something and still be able to tell a coherent story is a serious achievement. From the opening episode Murray Bartlett’s hotel manager, Armand, (five years sober and very ready to fall off the wagon) delivers the majority of the barbs with off-hand panache: “Treat these people like sensitive children,” he informs new staffer Lani, upon the arrival of the bourgie guests, “they just need to feel seen.” The craftsmanship of the upper-middle class trolling is truly exquisite, from the jungle animal sounds overlaying the guests’ obnoxious laughter, to the books they are reading poolside, to the Cornell hat on head of a particularly enraging entitled idiot-hole, no one is safe from White’s razor-sharp takedowns.

But this belligerent attitude toward 1%er White America often leads to a rather scattershot approach to the satire and a decidedly muddled morality. When no one is right, when everyone is an archetype of different elements of privileged self-involvement, White leaves very few opportunities to get attached to his characters. Purposeful? Absolutely. Enjoyable to watch? Not always.

Evidently, this is the year of uncompromising attacks on American social failings with The White Lotus's attitude toward crafting likeable characters sitting somewhere between I Care A Lot, which veered even further toward nihilistic, irredeemable evil, and the fierce, punishment focussed Promising Young Woman. But as the series shies away from either rewarding the Machiavellian tendencies of its ensemble of antagonists or making them really pay, it defangs itself somewhat.

Among these antagonists, Jennifer Coolidge (Best in Show, Promising Young Woman), as usual, steals the show with her dazed delivery of the killer one-liners given to her character, Tanya McQuoid, and her bizarrely touching scenes of exaggerated grief. Bartlett’s character, Armand runs a very close second along with Spa Manager Belinda, as the most likeable and identifiable characters in the story. It’s no coincidence that they are also some of the less privileged (though by no means the least).

Of the most privileged, Sydney Sweeney (Euphoria) and Brittany O’Grady (Black Christmas) as Olivia and Paula absolutely nail the exasperated “OK, Boomer” attitude starting out as two of the most insufferable characters on the show, heightened further by their antagonism of Olivia’s Silicon Valley libertarian objectivist Gen X mother: total nightmare humans making life harder for other total nightmare humans.

In fact, in this regard, no one really fades into the background, everyone shines equally in their deservingness for derision. Perhaps the only misstep is that the more the show focuses on honeymooners Rachel and Shane, the more it stumbles, neither of them really funny or terrible enough to justify their central position in the plot.

Both hilarious and depressing...

Fortunately, the show doesn’t live and die on whether you actually like the people in the story. Pricking the pomposity of these privileged archetypes might be the main thrust of the show, but it’s far from White’s only concern. One of the most powerful undercurrents in the series is its criticism of both the fetishisation of, and disregard for, the people of Hawaii. Its fame as a romantic tropical destination where the people are hula girls, servers or surfers is strategically engaged and skewered throughout the series. The few moments of uplift are born of the few genuine interactions the hotel guests have with the islanders as they take their first tentative steps outside their cloistered, money-driven lives.

It’s also important to note that as the series moves into its final episodes the rampant awfulness does let up in intervals, allowing for some character development among some of the less obnoxious guests. This work is made all the more rewarding in comparison to the increasingly terrible developments within, and additions to, the cast as the show lurches toward the status quo made apparent in its opening scene.

With an occasionally intrusive soundtrack and an overreliance on slow-motion to provide introspective establishing and act break shots, White's direction doesn’t quite match his wit and dexterity with words but as a truly bleak comedy, Mike White has struck a delicate balancing act, almost without faltering. Both hilarious and depressing in equal measure The White Lotus is one of the most skilfully written and performed dramas of the year.

The White Lotus is available to stream in its entirety on Sky and airing single episodes week-to-week on Sky Atlantic on Mondays.