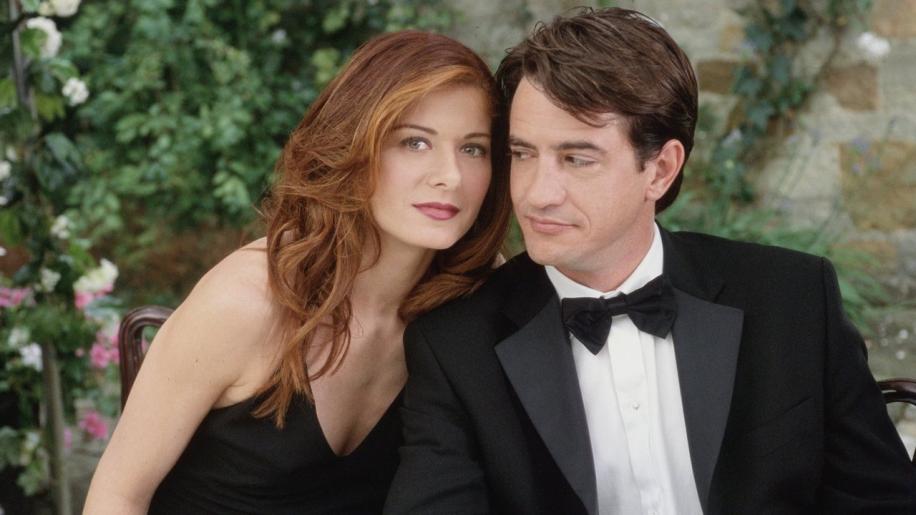 Presented in the theatrical ratio of 1:85:1 the film has been given an attractive transfer with clear and concise images. As it is a romantic comedy there are plenty of close ups on the actors. Debra Messing comes across quite beautiful and Dermot Mulroney being the handsome chap that he is, some nice eye candy for the ladies. The nightclub scenes are enriched with deep blacks and show no sign of bleeding on the brighter parts of the picture. The countryside scenes later in the film come across colourful and vibrant. In particular the grassy meadows come off quite striking in its green pastures. This gives the film that quaint English look which only a film shot in England can deliver. The Wedding Date for a simple comedy has a very pleasant Dolby Digital 5.1 soundtrack. The first thing that immediately grabs you is the terrific soundtrack complied for the film. There are songs from The Corrs, Texas and Michael Buble amongst others, these are all generously encoded into the soundtrack and fill all 5 speakers of your set up with occasional use of the LFE. Dialogue is clear and there are plenty of simple effects in the front left and right speakers such as talking from party guests in the reception scenes. Early on in the movie there is a stag and hen night, these kick the speakers into life and provide a really good atmosphere for those particular scenes. Music again fills the surrounds and idle chatter moves from one speaker to the next making these particular scenes most effective. Beginning with the deleted scenes, we have eight scenes in total running just under 10 minutes. Anyone who has read my reviews knows that I am not a big fan of deleted scenes. However there are two scenes on this disc which I think is a shame they weren't in the final film. Saying too much about them would give a little too much away about some of the film's plot points but I did like the brief scene between Kat's sister and Nick. I also liked the scene at the beginning of the selection in which Kat talks to an airline passenger. This gives Messing's character a bit more background for the story ahead.

'A Date with Debra' is a brief seven minute on screen discussion with Debra Messing talking about how she had the chance to spend six weeks in England and other brief stories about her experience making the film. Also included are clips from the film.

The feature commentary is quite unusual as it features the star of the film, Debra Messing only and no other members of the cast and crew. The commentary is not always continuous during the film and there can be some gaps in between Messing talking. However, she is an engaging individual and clearly enjoyed herself in England making the film.

At the beginning of the disc before the main menu, Universal has included some trailers for forthcoming releases which are Russell Crowe in Cinderella Man and The Interpreter with Sean Penn. Also included is a short promotional film advertising movies from the Focus Features division of Universal. Although you can work out the ending of the film near enough as soon as the film starts, The Wedding Date is an enjoyable ride with some good laughs and a delightful central performance from Debra Messing.