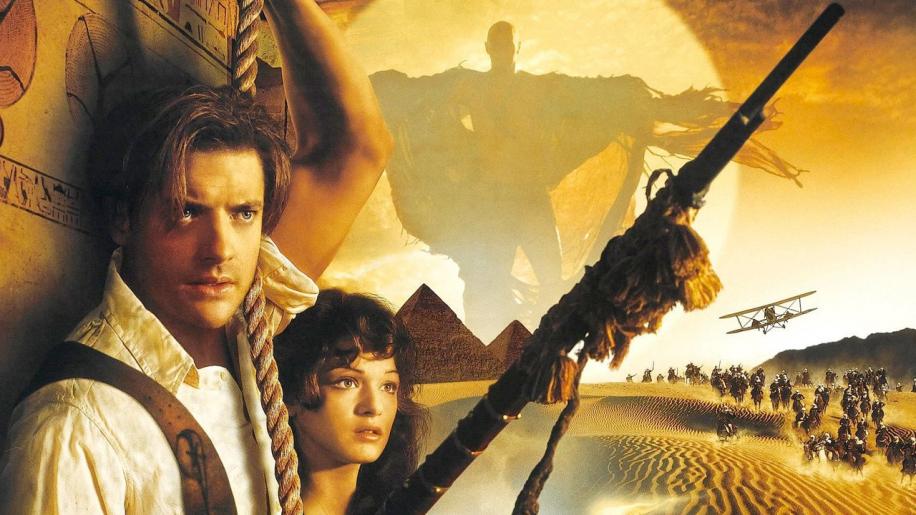 As you would expect, the picture on both these movie discs is superb - we've said it before and we'll say it again; these discs are reference quality for the DVD format. Both have a 2.35:1 anamorphic transfer. The Mummy is richly colourful, strongly detailed and devoid of any digital artefacts or unwanted edge enhancement. If it doesn't get a 10, it's only because The Mummy Returns is just that little bit better. The Region 1 package also has a 4:3 version of the movie, which the R2 package lacks. Scores 9.
The Mummy Returns has deep, lustrous colours, strong contrasts, eye-watering detail and a totally grain-free image. There's no sign of redundant edge enhancement and even in the darkest scenes you won't be able to spot any digital distortion. Superb. Scores 10. One incentive to get this box set, even if you have already bought The Mummy, is that this new version has both DD and DTS soundtracks. The Dolby Digital is fabulous, full of depth, extension and extreme placement effects; just listen to the desert battle in Chapter 2, for example. Is the DTS better? Well, unfortunately you can't switch straight from one to another to compare - you have to go via the Languages menu. The DTS track is certainly louder, but we've come to realise that this impression can be the result of different equalisation as much as anything. Let's just say that fans of DTS will point to this soundtrack as a good example of the format. Scores 9.
The Mummy Returns also has a choice of Dolby Digital 5.1 and DTS, and again, while the sound is superb throughout, it really proves itself in the battle scenes where the deep bass rumble of the hordes of Anubis warriors, the clanging of clashing steel and the shouts of the warriors are superbly supported by the score. The DTS track has a slight edge on the Dolby Digital 5.1 version, but careful adjustment of your system could probably achieve the same effects. Scores 10. This four-disc Ultimate Mummy box set features a stunning array of extras, though you might suspect that quality has been sacrificed for quantity. Although The Mummy Returns double-disc set is available separately, this is your only chance to get the two-disc version of The Mummy. In this package you get: a feature commentary by the director and editor, a commentary with Brendan Fraser, a commentary with Oded Fehr, Kevin O'Connor and Arnold Vosloo and subtitles in loads of languages. On the bonus disc are: the Building a Better Mummy featurette; visual and special effects featurettes; trailer; Egyptology 101, production notes; highlights of The Mummy Returns; cast and crew bios; The Mummy game trailer; photos; The Mummy Returns trailer; Pharaoh lineage; DVD-ROM games; deleted scenes; storyboard-to-film comparisons, screensavers, wallpapers and weblinks. So apart from the two additional commentaries and the storyboards, there's not much of any real value that isn't already on the original edition. Scores 7.
On The Mummy Returns are a commentary by the director and editor, and DVD-ROM features including a weblinks and a game demo. On the bonus disc are: a 20 minute Spotlight on Location featurette; interview with The Rock; The Mummy Chamber of Doom attraction trailer; Egyptology 201 featurette; music video; outtakes; game trailer; visual and special effects documentary and some production notes. Scores 7.One great movie, one mediocre one, but you can't beat the fabulous disc quality and cascade of extras.