A Sorkin release is a big deal, and The Trial of the Chicago 7 is peak Sorkin 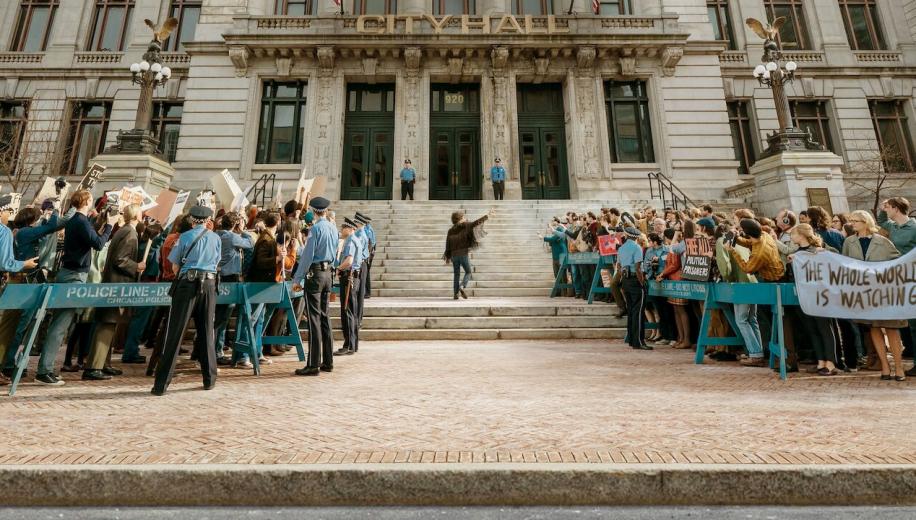 Aaron Sorkin has become one of film’s biggest Marmite stand-ins. Fans think his crackling dialogue, smirk-inducing one-liners, rosy ideologies and sweeping epic dramas make him one of the most successful and admirable modern filmmakers. Critics say his films’ unlimited supply of impassioned monologues and romantically rose-tinted view of leftist politics make them preachy and self-absorbed. Either way, a Sorkin release is a big deal, and The Trial of the Chicago 7 is peak Sorkin.

The film is based on the real-life trial of a group of anti-war protesters who were arrested at the 1968 Democratic National Convention and appeared in court in one of the most sensational trials of the 1960s. The defendants include hippy Abbie Hoffman (Sacha Baron Cohen) and his buddy Jerry Rubin (Jeremy Strong) from the Youth International Party, serious students Rennie Davis (Alex Sharp) and (potential Sorkin stand-in?) Tom Hayden (Eddie Redmayne) and suburban pacifist David Dellinger (John Carroll Lynch).

Not part of the septet and yet a huge part of the trial was Black Panther Party Chairman Bobby Seale, whose shocking story and treatment really warrant their own film rather than functioning as a side plot. It’s as though Sorkin realised that what happened to Seale (shown briefly here) goes to show that despite what Chicago 7 would have you believe, there’s often more injustice in the application of law than it’s comfortable to accept.

All the things you either love or hate about Sorkin cinema is here. There are plenty of note-perfect monologues, sublimely pithy one-liners, ostentatious showboating, big-stage grandstanding and every other impressively pretentious way of delivering dialogue. There’s also some really exciting editing, inspiring speeches that will pick at the heartstrings of even the most stone cold cynic and some larger than life performances that will surely be up there when we come to whatever iteration of the Oscars we’ll be having next year.

With lots of witty repartee and big dramatic moments, this is an aspiring Oscar contender’s wet dream

While Sorkin has been criticised regularly on Film Twitter and elsewhere for what’s seen as his unrealistic, naïve, rose-tinted and potentially masturbatory approach to dialogue, liberal politics and his view of the US in general, he’s still one of Hollywood’s top names and biggest draws. Chicago 7, while still plenty political and idealistic, is much more restrained than the regularly-memed The Newsroom, though not quite as entertaining as Moneyball or as stone-cold clinical as The Social Network, which was pretty much universally admired by everyone bar Zuck himself.

Say what you want about Sorkin, he’s carved out a real niche for himself in an almost auteur-like way – you can spot one of Aaron’s films a mile off, and they always unmistakably, remarkably and unquestionably bear his distinctive seal (mile-a-minute monologues and big orchestral tugs on the moral heartstrings).

Right from the explosive opening sequence, which does a great job in situating our main characters and summarising their protest, it’s apparent that though we’re dealing with history we’re also dealing with the present. It’s hard not to notice how Sorkin makes sure we draw a parallel between the events of the film’s 1960s and our present day – note the close-up of the cop ripping off his ID badge before heading into a protest. Indeed, though things have changed since the 60s, in many ways the world is still largely the same, as the film shows through its story of trial-by-media, protest politics, police heavy-handedness and violent riots that spiral out of control.

All of that said, it’s easy to be intoxicated by the Sorkin way. The world if his films is idealistic and plucky and everyone there is winningly eloquent. Sorkin’s characters are pretty much always the best version of themselves, which is either a big plus or a big downside, depending on your point of view. In the case of prosecutor Richard Schulz (Joseph Gordon-Levitt), the film decides to insert a bleeding-heart liberal conscience where history tells us there wasn’t one – in Sorkin’s world, even our ‘villain’ has to be a bit nice, deep down.

Sorkin’s big speeches and grandstand dialogue (seriously, no one does it like him, so just sit back and admire it) is more fitting than usual, since the real-life trial of the Chicago 7 was epitomised by showboaters of the highest order, with flagrant abuses of power and an incredible amount of justice-as-entertainment. The trial lasted more than six months, so including all of its nuances and details was always going to be an impossible task, but Sorkin’s decision to interweave two major narrative threads – the courtroom drama and Abbie Hoffman’s retelling of the story as a comedy routine – takes up even more of the lengthy runtime without adding much of value, and actually feels a bit disjointed in parts.

The trial was packed with drama and plenty of cinema-ready moments, though Sorkin has played typically fast-and-loose with some of the facts here (à la Social Network), and some aspects work better than others; for example, the addition of Seale is essential (and the film is immeasurably buoyed by Abdul-Mateen II), while the minimisation of two of the seven defendants (Noah Robbins’ Lee Weiner and John Froines’ Danny Flaherty) seems miscalculated and unexplained.

Sorkin’s body of work (A Few Good Men, The West Wing and his recent adaptation of To Kill a Mockingbird on Broadway in particular) demonstrate the writer’s great passion and faith in the American justice system. Given that the trial of the Chicago Seven is roundly considered one of the great examples of the US judiciary’s overzealousness (and even impropriety), it’s a truly interesting lens through which to view proceedings.

However you slice it, this is a fascinating moment of cinema that can’t fail to inspire even the most cynical of cynics

With lots of witty repartee and big dramatic moments, this is an aspiring Oscar contender’s wet dream. Indeed, expect it to clean up on nominee announcement day at all the major awards – Sorkin will of course be honoured, and some of the acting on display here really is season’s best. Particularly excellent are Frank Langella as hard-to-read Judge Julius J Hoffman, Mark Rylance as overworked and impassioned attorney William Kuntsler and Abdul-Mateen II as Seale, who manages to say more in one unforgettable silent moment than Sorkin could ever have conjured in a signature speech.

As always with a Sorkin flick, this is straight to the heart stuff. He wants you to get emotional, and invested, and inspired, and misty-eyed. He pulls out his tried-and-true bag of tricks to do it to great effect too – we’ve got plenty of lingering close-ups and huge dramatic moments in the score (by Daniel Pemberton) to really pull us into the world of the film.

Though Sorkin’s ideology and politics and whatever else can feel a bit much at times, this is still a great watch and is a high-quality courtroom drama, if you can disengage from the real history and sink into this world of glorious, so-pure-it’s-almost-silly fiction. It’s dramatic and entertaining and compelling and of course there’s plenty of spitfire dialogue to enjoy (even as a guilty pleasure). Crowd-pleasing Oscar bait, this is one of those films that’s always going to feel timely and will be loved, hated and everything in between – however you slice it, this is a fascinating moment of cinema that can’t fail to inspire even the most cynical of cynics.