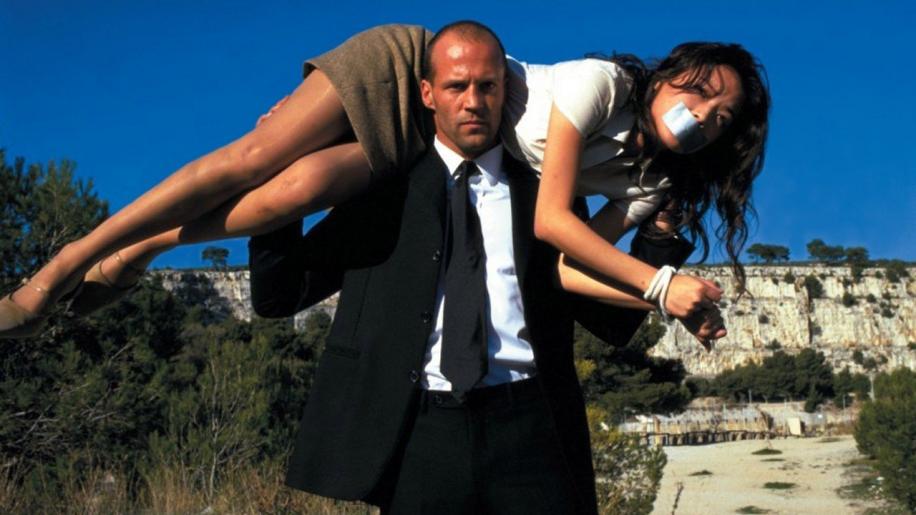 Fantastic cinematic image is presented here in its correct Anamorphic Widescreen 2.35:1 ratio. Filmed in the South of France, the image throughout is flawless and really gives you a taste of the locations. Displayed on an 80 inch projection screen, the image showed almost no signs of grain whatsoever and a cleaner print you'll struggle to find. The tone is warm, emphasising the sunny summer atmosphere in Cannes and its neighbouring towns. Black levels are excellent and need to be as Frank's suit and his car are deep black and this is captured beautifully with the levels achieved on this print. The image is smooth, but detailed. By that I mean there is no edge enhancement visible but still, detail is very high. The image looks very natural.

Whatever your opinion of the movie itself, you cannot fault the beautiful picture quality on this release. It is surprising actually as the actual bitrate level is not that high. Achieving an average of 6.55Mbps, this is some way short of DVDs' upper limit but just goes to show that you cannot judge an image by its bitrate alone! I really cannot fault the picture quality on this release and it totally achieves its aim of drawing you right into the middle of the action. In fact, after watching The Transporter, I was left wondering if I'd just been to Cannes for real!

Forget the unbelievable story, forget the gaping plot holes, forget the wooden acting. If you want to impress anyone with your home cinema system, this is the movie to do it with. The sound on this DVD, especially the DTS soundtrack is jaw droppingly good. The movie is filled with explosions, machine gun bullets, cars screeching round every corner and even low flying planes. The soundtrack captures every one of these superbly.

Bass is so deep it needs a headstone! I mean when there is an explosion, my cat had its paws in its ears and its eyes scrunched closed waiting to meet its maker! This is reference quality surround sound at its very best. The use of all channels is total and each speaker gets a very thorough workout. The difference between Dolby Digital and DTS is not as marked as with some releases but still, the DTS is more dynamic and is preferred for this type of movie just so long as your walls are thick and your neighbours are deaf. Separation between channels is exemplary and the most subtle of nuances can be heard exactly where they appear on screen. If I had to make any kind of criticism, it would be that the voicing of vocals concentrated to the centre channel is a little low and during the more energetic of scenes, you sometimes miss what is being said. This can of course be corrected by increasing your centre channel level, but then you shouldn't need to should you and what do you do if you're watching on a TV? This is only a minor point and for the most part, voices are clear and coherent, but stop me short of giving this a full 10 points.

Lets not beat about the bush here, this DVD has been released solely to coincide with the theatrical release over in the States of The Transporter 2. Consequently, the extras on this DVD are not too much different to those found on the original release. There are a few added extras namely an extended 35 minute documentary on the making of The Transporter compared to the originals 12 minute one, although this one is also included here too.

In more detail, this DVD contains the following added extras:

On the main page you have the option to select 'Inside Look' this gives you a trailer for The Transporter 2 and then a short 'making of' featurette of the movie. I will say that the sequel does look better than the original with definite similarities to Man on Fire within. Next you can select the Audio Commentary with Jason Statham and producer Steven Chasman, but strangely not with Director, Cory Yuen. Strange that is until you realise that Cory is from Hong Kong as English is not his first language! I really enjoyed the commentary. Jason's wide boy character mixes brilliantly with Steven's more reserved American temperament. They also let us into some truly fascinating trivia about the movie.

Then you have the Featurettes section. Click on this and you are greeted by the two featurettes already mentioned. The all new 35 minute Behind the Scenes piece which covers Jason's car driving training, his combat training and how the choreography was put together. There are interviews with the cast and crew with some translated from either French or Chinese emphasising the movies International connections. Then there is also the original 12 minute 'Making of' featurette which covers similar ground as the previous one, but with considerably less detail.

Next we have three extended fight scenes. The first is titled 'Wall Street's House, the second is the 'Container Fight' and lastly is 'Bus Station / Oil Fight. To be honest, I could see little more in these than in the actual movie, but then the fights are so fast and the camera work is so quick that if you blink you'll miss something! These are supposed to be unrated compared to the PG13 certificate of the actual movie but as I said, there is little difference between them and certainly the unrated ones do not appear to contain more violence or gore. Lastly we have trailers for two movies. The Transporter's original theatrical trailer and the other one is for Ong-Bak: The Thai Warrior. That's your lot! With the addition of the DTS soundtrack and two additional features, this isn't so much as 'Special Edition', more a 'Hurried Addition' to coincide with the release of the sequel, but the DTS soundtrack alone makes it the preferred choice if you like the movie.

An average movie which is boosted by a superb picture, reference quality sound, fight sequences to rival the best and one superb car chase. Did I say average? Actually, it's rather good just so long as you don't set your expectations too high! The Transporter is never going to become a classic and Jason Statham still has some way to go before joining the ranks filled by Vin Diesel, Bruce Willis and old timers like Arnie and Sly. But The Transporter still has much going for it. Let's just hope for the sequel, they have worked on a good and plausible story to go with the action. If they have then The Transporter could be a very lucrative franchise. The best is yet to come.